Thomas is the first Roberts in my family tree, but the name stopped at the next generation as I descend from his daughter Anne.  Coincidentally, my surname is Roberts, I had to keep reminding myself that this was my ancestor and not my husband's.  Thomas, although a very real man, has been the subject of "ancestry inflation". I'm not sure if anyone else uses this term, but what I mean by it is that he was  just an average guy, for the times, whose life accomplishments, and ancestors have been erroneously 'improved' for posterity. So, if you are reading this hoping for Lords and Ladies and Governors this is not the article for you.  However if you want to try to discover a little bit about the real man, follow me.

English origins If the information available on ancestry.com and other internet sites about Thomas Roberts is anything to go by then any article on who Thomas was needs to start with who he wasn't.  The only clue to his origins is found in the records of the London Fishmongers Guild to which he was apprenticed.  The entry of interest is found in the year 1615 and reads "Thomas Roberts, son of John Roberts of Woolston, in the county of Wooster, yeoman put apprentice to William Adys for eight years from". This tells us his that his father's name was John, his hometown was Woolston and as most apprenticeships began about age 14, that his approximate year of birth was  1600.
If you read just about any bio of Thomas on the internet you will find a jumbled mess of ancestry written about him. Here are what I consider to be the most erroneous data that I have found:

Thomas Roberts was the son of Sir Thomas Roberts and Lady Francis James of Glassenbury House in Cranbrook, Kent.  This is so obviously wrong. The family of Sir Thomas had lived in the Cranbrook area for centuries, they were what we know as  the landed gentry, a family whose income came from the rents from their land. Sir Thomas was knighted in 1603 and became a Baronet in 1620 when he served as High Sheriff of Kent. "Baronet" is title created by King James I in 1611 giving the holder the hereditary right to be called be called  "Sir". His sons, Walter, Thomas, William and James, were called 'Gentlemen' as they did not need to work for a living. His eldest son Walter, born in 1586, was knighted in 1624 and inherited the title upon his father's death in 1628. Thomas son of John could not be the Thomas of Dover. His father's name is not John, and he was baptized on 11 October 1590, making him to old to be our apprentice in 1615.  This Thomas did not come from Woolston, he would never call himself or his father a "yeoman" and we know from records that he died unmarried in England and he certainly was never an apprentice fishmonger.

Thomas was also not the son or grandson of John Roberts of Wollaston and Cassandra ap Rhese of Huntington. This John is supposedly from Wollaston  in Northampton. I cannot find any record of him.  Cassandra was born c. 1529.  She was married four times.  In 1545, at age 15,  she married her second husband Peter Assheton of Chadderton, they had five children. He died in June of 1558.  In 1559 she married Adlard Welby of Gedney.  They too had five children, their eldest son, William, was knighted at the coronation of King James I. Adlard died in 1568. Cassandra married her last husband Robert Carr on May 10, 1574.  She died March 1, 1590/1 and was buried at Gedney. There is no record of any children from Cassandra's first marriage, as she was only about 15 when she started her second marriage, John Roberts must have died shortly after he and Cassandra were married. And, as with the Roberts' of Glassenbury, these families, the Asshetons, the Weblys, the Carrs were very wealthy families who would not have sent a child to be an apprentice fishmonger.

So who was John Roberts of Woolston.  There is a small village of Woolstone in Gloucestershire near the Worcestershire border. In 1600 it was the home of John and Margaret Roberts. The baptisms of two of his children were recorded, they were sons Nicholas and George.  George, baptized in 1601 was also taken  to London and apprenticed, his entry into the Drapers guild reads "George Roberts son of John Roberts yeoman of Wolston, Gloucs".  It is possible that this is the family of Thomas Roberts. For more information about this family see the Roberts Family of Woolstone webpage by Fredric Z. Saunders. 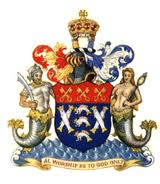 The Worshipful Company of Fishmongers is the official name of the Fishmongers guild in London, it has been in existence for more than 700 years.  The purpose of the guild was and is to regulate the the buying and selling of fish.  I am not sure why the word "aristocratic" usually proceeds the guild name when written about in conjunction with Thomas Roberts. The guilds were at one time very powerful and many "aristocrats", including princes and kings, became members.  You did not have to be a fishmonger in order to be a member.
Nothing is known about Thomas at this time,  most boys began their apprenticeship at age 14 for a period of seven years.  Thomas was apprenticed for eight years beginning in 1615 and he was admitted as a full member of the guild on April 29, 1623. His entry in the records reads "Thomas Roberts, my apprentice, William Adys... presented and admitted… to Fishmongers Guild, admitted and sworn on 29 April 1623”.  These dates are somewhat different from what you see written about Thomas.  If Thomas was made a freemen in 1623, he could hardly be an apprentice to Edward Hilton and in New Hampshire at the same time.
The last mention of Thomas in the Fishmongers Guild records was made in the 1641 Fishmongers tax roll of London, he as well as Edward Hilton are noted as being "In New England".

Coming to America Just when you think the controversies about Thomas Roberts have ended, they kick right back up again.  When did he come to New Hampshire? Most of the older genealogies will tell you that he arrived in New Hampshire in 1623 with the Hilton brothers. However, the Hilton brothers were not in New Hampshire in 1623, so that sinks that story. William Hilton was in Plymouth in 1621 and eventually moved up to the Piscataqua after the arrival of his brother Edward.  Edward arrived sometime between 1625 and 1628. He probably made at least one return trip to England to gain his charter for his patent and to bring back family and settlers. It is entirely possible that Thomas Roberts, having finished his apprenticeship, returned with Edward to New Hampshire. Ultimately no one can really say exactly when Thomas arrived, and if Robert Charles Anderson does not include him in his Great Migration series, it's proof enough for me.

Rebecca It is "traditionally given that the wife of Thomas Roberts was Rebecca Hilton, sister of Edward and William Hilton". What does that mean?  I cannot find anywhere anything other than that statement when looking for detail on the wife of Thomas Roberts.  The baptisms of the children of William Hilton of Witton cum Twamsbrook, Cheshire are recorded in the parish records.  His children include Edward, William and Richard who all immigrated to New Hampshire.  There is also a son John, and daughters Margaret, Mary and Elizabeth.  There is no Rebecca. There is no known date of birth and there is no known date of death.  There is no record of their marriage. They did not even name a daughter after her and interestingly only one of her five children named a girl Rebecca.   Everything that is written about her is pure conjecture and not fact.  I'm not even sure her name was really Rebecca.
While we are on this Hilton topic, the father of the Hiltons was not Roger Hilton, it was William.

Governor Thomas Roberts I have seen this written everywhere. Thomas was not a Governor in any sense of the word as we know it today.   In March or April of 1640 he was elected "President of the Court" of the Bristol Company, the owners of Dover.  This position has been described as little more than head of a group of selectmen.  When the Dover Combination was signed on 22 Oct. 1640, there were only about 40 men in Dover. So, as the colony grew in size other men stepped up into leadership roles.  Thomas held various minor offices, but never again assumed a leadership position.  This is not said to belittle him as he was quite successful, but to style him as Governor seems a bit much, not to mention Governor of New Hampshire, which he most certainly was not.

Children of Thomas and Rebecca named in his will:
John b. about 1630 m. Abigail Nutter
Thomas b. about 1636 m. Mary Leighton
Hester married John Marytn of New Jersey
Elizabeth married Benjamin Heard he m. (2) Ruth Eastman
Ann married James Philbrick of Hampton, he drowned in the Hampton River in 1674, she married (2) William Marston in 1675.
Sarah married Richard Rich Feb 24, 1670 he drowned at sea c. 1690

note: the birth years of the daughters are unknown, the birth order is based on the will of Thomas and the order in which he names his children. The birth dates for the sons are based on the ages they gave when deposed in court later in life.

Thomas wrote his will in 1673 and it was proved the next year.  He was buried in the north east corner of the old burying ground on Dover Neck.   As stated earlier there is no record of his wife's death or burial. The fact that he did not mention any wife in his will makes me think that she was already dead, as most men made provisions for their spouses for their lifetime. His headstone was obviously erected long after his death and perpetuates the story of his arrival in 1623.

Sarah got her fathers house, out buildings, orchards, planting lands, pastures both fenced and in common privilege, rights to the common. He also gave her a four acres plot of planting land and three acres of marshland on the Winnicutt River down near Greenland.

Traditionally, the testator of a will most often names his sons, then his daughters. So the sons may be named in birth order and the daughters the same, but that does not mean that the daughters are all younger than the sons.

I just came upon this blog post, in researching my ancestor Thomas Roberts (I'm also a descendant of his daughter Ann). Thank you for the research, and your informative and entertaining blog post.

Thank you, too, from a descendant of daughter Sarah Roberts who married Richard Rich. If you know anything about her husband, who was made executor of Thomas Roberts' will, I would be delighted.