In a recent post about my gggrandfather's brother David Thornton, and the loss in a single day of three of his young children, I speculated that they may have died of Influenza or some other communicable disease.  I was wrong about the flu.  I found their death certificates on a recent search on familysearch.com.  Two of the boys died of "canker rash" and the other of "scarlatina". 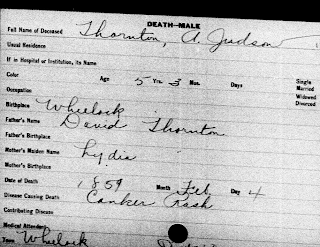 I don't think I would like to die of a canker rash, also known as putrid sore throat, just trying to imagine what it is makes me cringe, somehow scarlatina sounds less awful.  Of course I had to look these up and both are forms of scarlet fever.  Scarlet fever is rare today but between  1820 and 1880 there was a world pandemic. In 1859 the diagnosis was made based on the symptoms exhibited by the patient, these included a rash, fever, sore throat, swelling of the lymph nodes and ulceration of the throat and tonsils.

before antibiotics
Today we know that scarlet fever is cause by a group A streptococci, easily treated with antibiotics.  The bacteria which cause scarlet fever was first identified in 1884, but it was not until the discovery of penicillin in the 1920's that a cure could be found for this deadly disease.  The disease progressed quickly after onset of the first symptoms  usually fever and sore throat and death could occur within 48 hours.

Treatment was limited and ranged from the bizarre to the ineffective. The disease was passed via airborne particles as well as by direct contact. Multiple people in the same family might be infected and each be affected differently by the disease.  Some might have a mild case while others died, depending on their reaction to the toxins released by the bacteria.

I don't want to know what that must have been like, watching your children struck down by disease,  but it was a tragedy that occurred all to often to our ancestors.

sources:
familysearch.org
Swedland and Donta, Scarlet Fever Epidemics of the Nineteenth Century, a case of an evolved pathogenic virulence.