Growing up a Thornton I was always familiar with the story of Matthew Thornton, my 4th great grand uncle. He was a doctor, soldier, statesman, and signer of the Declaration of Independence.  For me, this amazing connection to the birth of our great nation is a point of family pride.  But there is another Matthew Thornton in my family tree, he is my 3rd great grand uncle, nephew of the other Matthew, brother of my 3rd great grand father, and he was accused of treason, tried as a traitor, called a loyalist. Two men, two sides of the greatest conflict in our history, one family divided.


Matthew Thornton was one of only a handful of foreign  born men who signed the Declaration of Independence.  Born about 1714 in Ireland, his family, staunch Presbyterians, left Ireland about 1718. The Thornton family lived for a time in Worcester, in the Bay State (Massachusetts).   Matthew's father, James Thornton, was a smart man, he was unhappy in Worcester, the town would not grant the Presbyterians the right to their own minister and forced them to pay taxes supporting the Puritan Church. He was the driving force behind the formation of the town of Pelham, admission requirement: being a good upstanding Irishman. 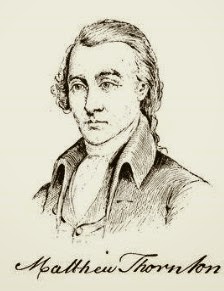 Matthew Thornton, son of James, was also intelligent and ambitious.  Farming was not for him.  He trained as a doctor under Dr. Grout in nearby Leicester, MA. After finishing his apprenticeship he set up practice in Londonderry, NH, a town founded by his fellow countrymen from Ireland. In 1745 he joined the New Hampshire Militia as a surgeon, and accompanied them to the siege of Louisburg.  He had a royal appointments as a Justice of Peace.  He also was a proprietor in many of the new towns that were being formed in New Hampshire, including the town of Thornton, NH which was obviously named for him.

Matthew lived in Londonderry, where he married, finally, in 1760 Hannah Jack.  He was elected selectman for Londonderry many times, as well as a representative to the provincial assembly. In the run up to the American Revolution he was a member of the Committee of Safety, he was not only a representative to the Continental Congress, but a signer of the Declaration of Independence.  Matthew supported the war wholeheartedly and continued to participate in state politics after the formation of the state legislature. He was born an Irishman but became a great american patriot.

Matthew Thornton, sometimes called Matthew Thornton, Jr. was the third son of William and Dorcas Thornton and nephew of Matthew, Sr.  He was born in 1746 in Palmer, MA, but came of age in Schenectady, NY.  In 1768, at the age of 21, he married Mary Crawford. He was a farmer and served in the Schenectady Militia with his brothers under Captain Daniel Campbell. 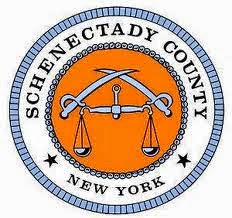 His uncles, Matthew, James and Andrew were grantors in the new town of Thornton, NH that same year, 1768.  In 1770 a census of Thornton showed only 4 tax paying men living in the town. By 1775 there were Thorntons, Wallaces, and Crawfords settled there. The Thornton men included William Sr. and, William Jr. and Matthew, his sons.   James, John and Thomas, other sons of William Sr. chose to remain in Schenectady, NY.

Captain Matthew, as he was known, was chosen to represent the town of Thornton in the third Provincial Congress on 21 April 1775 in Exeter, NH as well as the 4th congress held in May. He was appointed to various committees including one that was asked to form a plan to regulate the militia. On 6 July 1775 he was recommended to serve as a Lieutenant in Captain Osgood's company in the Continental Army. He was also recommended by David Hobart, David Webster and  Samuel Sheppard to the Committee of Safety to be allowed to enlist his own company of 43 able bodied men as soldiers. In their letter the men wrote that Matthew was "a man we can depend upon in the greatest trouble or distress".Two of the men who joined up with him were Thomas and Jonathan Crawford of New Chester, possible relatives of his wife Mary Crawford and also his cousin John Wallace.

Captain James Osgood and 1st Lieutenant Matthew Thornton were able to raise three companies who marched from Haverhill, NH on 8 September 1775 to Ft. St. John in Quebec, which fell to the American forces on 2 November 1775. On 21 December 1775, Matthew's term of enlistment was up and he mustered out of the army.  This was the last time he took up arms as a patriot.

On 30 September 1777 Matthew Thornton was arrested and accused of being a traitor. It seems that he had be caught on 16 August 1777 at the Battle of Bennington on the British side of the breastwork. He claimed that he had left Thornton, NH to check on his property at Otter Creek, New York, some 170 miles away.  He claimed that he was taken by Hessian soldiers and forced to drive their wagons, witnesses said that there was not a wagon in sight when he was taken.

At the time that Matthew decided to do a property check, General Burgoyne and his army were pushing south to Albany, NY after their recent victories including that at Ft. Ticonderoga. Burgoyne sent a detachment of men under the command of Lt. Col. Frederick Baum to forage for the army.  Baum's men were mostly Brunswick Dragoons, British Sharpshooters, Canadian and some Indians.  Along the way the met up with several companies of American Loyalist who joined them.  Was Matthew Thornton one of these men?

The Battle of Bennington, was a great victory for the American forces, led by Col. John Stark of New Hampshire. It ultimately resulted in the surrender of General Burgoyne and brought the French into the war.  It is said that the most vicious fighting took place between the patriots and the american loyalists. David Hobart, who first recommended Matthew to the Committee of Safety, was commander of the detachment of the 12th New Hampshire Regiment that was fighting at the Tory breastwork.  Matthew was lucky he survived the battle at all. Matthew's brother John was present at the surrender of Burgoyne. I wonder if he knew then that his brother had been arrested for treason.

Matthew was taken back to New Hampshire, formally charged with treason and imprisoned awaiting trial in Exeter. He tried to escape in May of 1778, but he was caught and put in irons. He remained in handcuffs until June, when he petitioned to have them removed.

His trial was not until September 1779.  He plead not guilty.  His Uncle, Matthew, was not a judge at his trial, but it possible that he influenced the jury's decision of not guilty. It's hard to imagine what he could have said to convince the jury of his innocence.

After the trial Matthew and his family left the United States for the loyalist stronghold of New Brunswick, Canada, where he was given a Loyalist land grant in St. Andrews. He was also a member of the Penobscot Association of United Empire Loyalist. His wife and family joined him in Canada after the war in 1783. His brothers James, John and Thomas, who remained in New York all served and survived the war.  I wonder what they thought of him and if they ever heard from him after he left the country.