This is a continuation of the George Wathen (Worthen) Story.....
Ezekiel


So, Ezekiel, George's son, is now a grown man, his apprenticeship to blacksmith  is finished, and he's ready to strike out on his own.  According to Joyce  in her article on the Worthen Family, Ezekiel was friends with Samuel Foote, who married Hannah the daughter of Richard Currier. Ezekiel also married a Hannah, she was the daughter of George Martin and his first wife Hannah Unknown.  on 4 December 1661 in Salisbury.  Hannah's mother died when she was 2-3 years old.  She was raised by her step-mother  Martin. George Martin was also a blacksmith,  when he came to the colony, but he was living is Salisbury by 1643.

Move to Amesbury
The father-in-laws of the two young men had lived in Salisbury, Mass, but by that time the town had grown beyond its boundaries and a new town of Amesbury was underway.  In 1666  Amesbury and as citizens of the new town. As with most men, Ezekiel became more active in the running of town as he grew older. By his forties he served on juries and took his turn as town constable. He took the Oath of Allegiance in 1677. Ezekiel bought and sold land for the of his life. He also deeded land to his children.

Members of the Amesbury Church
In 1667 his spot in the meeting house, next to his father-in-law, George Martin. During the church service the men sat on one side, the women on the other.  Everyone had an assigned spot based on social standing in the community. The Deacons of the church sat beneath the Minister and faced the congregation.  A "tithing man" walked around the building with a long stick, prodding people who appeared asleep.  Apparently George Martin objected to the seat assigned to his wife, Susanna, possibly he felt that she and should have a better seat. This was the beginning of a long series of skirmishes which would eventually end badly for Susanna Martin.

Martin was born in Olney, Buckinghamshire, England.  Her parents were Richard and North.  Joan died when Susanna was young and her father remarried in England to Ursula Unknown.  The family immigrated by 1639 and lived in Salisbury, Massachusetts. Richard had the lot next to Abraham Morrill. Susanna married the widower George Martin on August 11, 1646.  (George Martin is NOT the son of Christopher Martin, a pilgrim on the Mayflower!)

Accusations
Susanna was first accused of witchcraft in 1669 by William Sargent, Jr. and his brother Thomas Sargent (both ancestors). Her husband sued them for slander. Both cases went to court.  Charges against Thomas Sargent, but William Jr. guilty and given a nominal penalty. against William Sargent Sr. but the court disagreed with this decision.  The proceedings and outcome of the case against Susanna is unknown, .

In October 1669 George by Christopher Bartlett because Susanna had called him a liar and a thief.  Their son Richard Martin was also in court that year for assaulting and threatening his father, to . Obviously 1669 was not a good year for the Martins.

Susanna's father Richard North died in 1668 and she and her sister Mary expected to have a large share in his estate. However his Widow Ursula produced what they considered a fake will which left almost all the estate to her. George, Susanna and Mary took Ursula to Court. Their lawsuit went back and forth several times but they finally lost in 1674, another blow for the family. Things seemed to settle down for a while. George, Susanna's husband, died in 1686, leaving his estate to her to manage. His death also left her to defend herself against any further charges, making her an easy target for unhappy neighbors.

Susanna and the Witch Trials
1692 is the year that the witch trials in New England reached their zenith.  The girls involved in the Salem Witch Trials spread their accusations to neighboring towns.  No one, irrespective of position, whether high or low, was safe from the accusers. Eventually the girls accused Susanna once again of being a witch, with her history, it's not a surprise. Luckily for her daughters, none of them unlike other families where the females were all under suspicion. 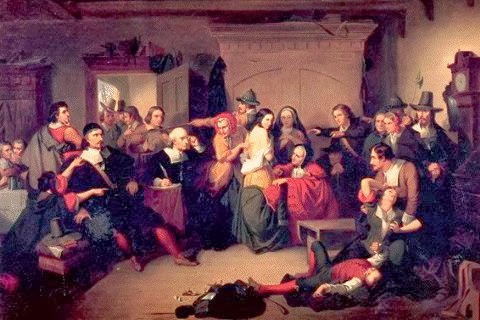 On 30 April 1692 for Susanna's arrest.  Her friend and neighbor Orlando Bagley, town constable, came to arrest her.  After a preliminary hearing she spent time in prison.  on June 26th, her neighbors came out in droves to spin wild stories of her guilt. Some of those neighbors are also ancestors.  She was a tough woman who stood her ground; she refused to plead guilty and possibly save her life as others had done.


The Rev. Cotton Mather said about Susanna, "This woman was one of the most impudent, scurrilous, wicked creatures of this world; and she did now throughout her whole trial discover herself to be such a one. Yet when she what she had to say for herself, her chief plea was that she had led a most virtuous and holy life." Mr. Merrill, in his History of Amesbury described Susanna snatching this hardworking, honest woman from her home to for her life by those who never knew her, and witnesses who against her...is almost too much for belief. ..Allowed no counsel, she was her own lawyer, and her answers are remarkable for independence and clearness. She showed herself to be a woman of more than ordinary talent and resolution."    Family Website.

Having guilty, Susanna Martin and four to Gallows Hill and hung on July 19, 1692. Only after the Salem accusers pointed their fingers at the very top of society, including the family of the above Cotton Mather, did the trials stop. In 1696 Rev. Mather issued a statement that the trials were a travesty and that innocent people lost their lives.  In 1711 the General Court issued an apology and compensation for many of the survivors.


Conversion to the Quakers
According to Samuel Copp Worthen in his history of the Worthen family, Ezekiel left his Congregational Church after the witch trials and joined the Quaker Church. On at least two occasions he had possessions or animals confiscated to pay his rate for the Congregational Minister.  Eventually the Quakers opt out of the tax.

Despite their trials Ezekiel and Hannah lived long prosperous lives.  They had ten children, who all lived to adulthood.


RIP
Ezekiel wrote his will in 1715 and died the following year. Hannah, stayed in the family home for some years afterwards but eventually moved in with her daughter Hannah Fowler.  She died in 1730.


Sources:
The English Background of George and Margery (Hayward) Wathen of Salem, Massachusetts by Clifford L. Stott, F.A.S.G. 1996, The Register

Descendants of George and Margery Wathen of Salem, Massachusetts, by Joyce S. , cg. 2000, The Register

The Devil in the Shape of a Woman, Carol F. Karlsen

The History of Amesbury, Joseph Merrill

My name is Samuel C. Worthen and I am a descendant of Ezekiel. My branch of the family has always kept records and it has been interesting to see just how accurate they were.
My question regards your statement about Ezekiel's trade. We have always known that he was apprenticed after the death of his mother, but have never been able to track the mysterious Thomas Abree/Avery.
swor319585@aol.com

Hi Samuel, Thanks for looking at my blog. I got my information about Thomas Avery from The Great Migration Begins, by Robert Charles Anderson, and the two articles about the Worthen Family in the New England Historic and Genealogical Register. Since Thomas Avery was a blacksmith, I took a leap of faith and said that he trained Ezekiel to be a blacksmith,as the whole point of an apprenticeship is to learn a trade. However, he is always described as a planter or yeoman. Please let me know if you think I have any information wrong. My descent is from Ezekiel, Ezekiel, Ezekiel, Jacob, and then Rachel Worthen/Enoch Rowell. Jeanie

Thanks for getting back so quickly Jeanie. The only thing that had me thinking that Ezekiel may have had another trade was a Court document that I read some time ago. It indicated that he had been fined 2,200 cedar shingles for not paying his church fees. The style of shake/shingle in use at this time was usually much larger than what we are used to today. Often with more than a square foot to the weather. To have this large quantity at hand would indicate to me that he had an unusually large house or barn for the period or that he was in the business of making them.

I have been trying to locate a letter written to my Great Grandfather by another family researcher and dated 1909. The letter describes a walk taken by the writer to visit the site of Ezekiel's house in Amesbury. He clearly describes landmarks, road names and people spoken to on the walk. He finally arrives at what he refers to as the "sacred cellar hole". It will be interesting to follow his path with with a map from that time. I met a woman years back in Amesbury who was convinced that the site had been eaten up by a gravel pit. I am in the process of scanning my mountains of research work so hopefully I will find the letter soon.

Joseph Henry Worthen (b. May 6, 1839) was the father of Samuel Copp Worthen (b. Apr. 10, 1871). Joseph's brother, Hosea Quimby Worthen (b. July 2, 1847) was my Great Great grandfather. Samuel Copp accomplished a lot with the Worthen genealogy as well as other relatives. He wrote what he called the ("Corinna Sketches") of which I have a copy. His work was donated by his sister Alice Hilda along with $90,000 to the Maine Historical Society in Portland, Maine upon her death. My brother and I visited the Brown Library in Portland at the Maine Historical Society to look at the works of Samuel Copp. The "Corinna Sketches" they have are not the original copies. My copy was eligible in a few places as was the case in the copy at the library. Would you happen to know where the original copy of the "Corinna Sketches" might be? Do you live in Maine? Are you aware of the boxes filled with Samuel's work that are available to view at the library? It is amazing. Please e-mail me if you want at mcooperlary@yahoo.com. Thanks, Mary

Hello Jeanie, I am just getting started on my ancestry and enjoy all of your work. I descend from Ezekiel, Ezekiel, Ezekiel, Jacob then Isaac. My Grandfather Eber Earl Worthing was put up for adoption from Alonzo Worthing and so I never knew any of this history and my family has now passed on. I will continue to follow you and when I receive something that you do not show here, I will pass it along. Denice Dobeas Vezetinski