Puritan Courtship and Marriage in the Massachusetts Bay Colony

It's been a long time since I got married, but I still remember the excitement and nerves that went along with that special day.  We had a lovely catholic wedding, which if you don't know, goes on for at least an hour. And why not, you spend so much on your dress and flowers and stuff, it should last a good long Altogether, with the rehearsal dinner, reception, and the ceremony itself it was quite the event.  So what was it like when our puritan ancestors married? Here is what I know about Puritan weddings.

age of marriage
The age at which men and women are marrying, for the first time, is rising.  In 2012 the average male married at 29 and his wife was 27.  There are multiple reasons for this trend, including simple economics.   get married, support a family and live a decent life, one needs a certain amount of income. This is becoming harder to achieve and takes a bit of time to reach a level of economic security on which many couples feel it is safe to marry. 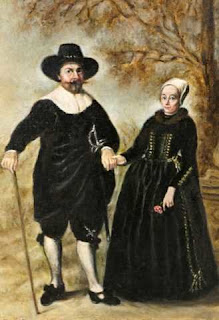 This was the case in England and the Massachusetts Bay Colony in the 1600 and 1700s.  In England the conditions were worse than New England and 30% of adults never married. In Massachusetts almost all adults of marriageable age married. Most widows and widowers promptly remarried after the death of their spouse.  Many adults married two even three times in their lifetime. But, the age at which they first married was much like today.  Men needed some measure of economic freedom from their fathers to support their wife and their inevitable children.

Most of the men in the early days of the colony made their living by farming and raising livestock. They needed land to do this.  Fathers seemed reluctant to part with their land but would often allow sons to farm portions of their land, often virgin land, that had yet to see a plow.  Less often fathers would outright deed land to their sons. If there were a lot of sons in the family, to learn a trade to earn a living wage.  Men got married on average at about 27 years of age.


Women worked at home with their mothers or step-mothers from a very early age learning to run a household.  They would have to learn to make meals from scratch, make soap and candles, and how to sew their own clothes.  They might also work as a servant in another home.  Women got married on average at about 24 years of age.

The Puritans believed in the family as a unit.  Everyone must belong to and live with a family.  There were no bachelor pads, or boarding houses.  In 1668 the Court of Middlesex County conducted a search for single people and forced them to choose a family to live with. The only way to move out of a family home was to start your own, but first you had to find your mate.

Although the Puritan lifestyle was highly restrictive, boys will be boys and girls will be girls and they will meet.  Once a week, on the Sabbath, everyone in town came together at the meeting house for Sunday service. This would ensure that all eligible men would meet all eligible women. Many people married locally to men or women they grew up with.  Families became complicated with intermarriage and in a small town to each other.


what's love got to do with it
believed that couples should marry for love, this goes against my image of the dour strict and loveless people of my imagination.  Parents and children must give their free consent to marry. Men asked permission of the woman's father to court her. I was surprised to find that the bundle board was not a myth but used. to spend the night, together, in the same bed, separated by the bundle board.

If at the end of the courtship the couple marry they would enter a 'contraction'. The couple would post their banns at the meeting house three times.   to choose the text for the minister to preach, this was her day in church.  If there were no objections, the marriage could proceed.

No doubt there were some negotiations going on.  The couple had to live somewhere, either in a new household of their own or with one of their parents.  The couple would need furniture and other household items to start their new life together.

the wedding ceremony..or not
Today many couples marry in June, Puritans preferred November. There was no need for a wedding planner, wedding gown or even a church.  The couple married at the bride's family home.  The local magistrate or, if the marriage occurred after 1686, the local minister arrived, asked the couple if they wanted to marry and if they both said yes... That's it.   in the town records and the families might have a little party with small cakes and a beverage, but no party, no dancing or feasting.

alternate routes
If a couple to marry, and the parents disapproved, they could 'self marry'.  I'm not sure exactly what they had to do to achieve this, but I could probably make a few guesses.  If they did 'self marry' they could petition the court to recognize their marriage.

A surprising number of my ancestors were obviously pregnant at the time of their marriage. A 'premie baby' that looked 'full term' was a dead giveaway. to the local magistrate and hauled into court charge with fornication. The court would typically sentence them to or pay a fine.

A single woman who became pregnant by a reluctant father would also find herself in court. to testify on behalf of both parties.  If the man denied being the father the court would wait for the birth to occur.  At the height of the woman's labor pains the midwife would ask her to name the father. that the woman, in total agony could not lie. If the court believed the choice of marriage or financial support for the child.  The woman was then promptly returned to her family.
- October 05, 2014