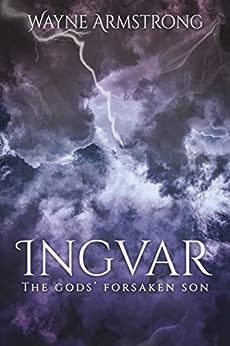 Reviewers Note: I was given a free copy of this book in exchange for an honest review.

Plot: Ingvar: The Gods' Forsaken Son is the story of the eldest son of a fictional Norse King who has fallen under the sway of Gyda, his second wife and mother of his second son, Thorir. Ingvar is worried that his step-mother will convince the King to name Thorir as his heir. Ingvar organizes a mighty expedition and sets sail seeking fame and fortune. Unfortunately, a storm blows him off course and his plans are dashed when he is taken and sold into slavery in Spain. Despite his predicament, Ingvar is determined to return home and claim his throne.

Characters: When not killing innocent farmers, enslaving their families and robbing monks and monasteries, Ingvar is a likable enough man. He loves his wife and children and he inspires respect and loyalty in his crew. An uncomplicated man, he is predictable in his choices and actions. The evil step mother and her son are both one dimensional and without real depth of character. They do just what you think they are going to do. There are lots of bit characters who assist or hinder Ingvar along his journey.

Writing: I thought the writing was excellent. Without typos or grammatical errors, the pace is fast and the story zips along.  No complaints here.

History: I thoroughly enjoyed the historical aspect of this book. I have read several books in this time frame, including the Bernard Cornwell Saxon series, set slightly later in the 10th century. This one is particularly well researched.  The inclusion of the Emir of Cordoba and Muslim Spain was a treat. From the petty kingdoms of the British Isles to the monks of Mont Saint Michel, Armstrong takes us on a whirlwind tour of 8th Century Europe. I did not see anything that I found out of character/ unrealistic for the time period.

Overall: I found this an enjoyable read. I admit to skimming some of the battle scenes as I had a hard time following them in my mind and there are a lot of them. I do wish there was more intrigue and suspense to keep me guessing what will happen next. The overall story is one of action; straightforward and without surprises.

Recommendation: I would recommend this well written novel to fans of historical fiction, especially those with an interest in the Dark Ages, military history, Vikings and sea-going adventure stories. There's ample good history to be gleaned from this book. There are quite a few battle scenes, but I didn't think the violence was overly graphic.


5 Stars: So good, I might read it again sometime! Highly recommend