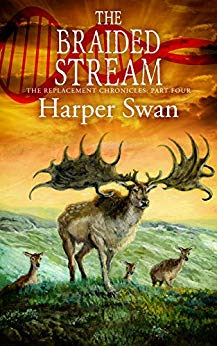 Reviewers Note: I was given a free copy of this book in exchange for my honest review. If you are interested in purchasing this book or viewing it on Amazon click on the book cover which has a link to its page.

The Plot: The Braided Stream is the fourth is a series which chronicles the lives of Raven and Leaf who lived in a prehistoric world alongside the Neanderthals. I read it as a  novel. (I will now go back and read the earlier books!) but I never felt lost in the series. The Neanderthals, known as the People, are dying out and Elder Woman, the cagey leader of her clan  to see to the survival of her family. To do this, she kidnaps Leaf and his daughter Wren, members of the Wind Clan, and a separate race, known as Them. Elder Woman hopes they will mate with her children and grandchildren and propagate a new generation. Raven tracks the pair back to the clan's cave and struggles to free her child and mate even as she reunites with Elder Woman's son Chukar.

The History: about the cultural lives of our prehistoric ancestors. When did they achieve true speech, when did religion arise and in what form, what was the nature of their relationships? This void gives authors, a blank canvas on which to create the world of prehistoric peoples almost from scratch. Jean M. Auel's 1984, Clan of the Cave Bear, is one of the most celebrated books in this genre. That being said, fans of Ms. Auel will with the world and characters created by Harper Swan. She paints a vivid, realistic picture of the lives of these people. I felt like I was squatting in front of the hearth fire alongside Raven eating raw liver.

The author does a great job of creating language, cultural norms and religion for her characters as well a differentiating the abilities between the two early hominid species. I appreciated that Swan created strong women in Raven and Elder Woman, both take charge women who lead their clans with their intellect and their nurturing natures.

The Writing: Harper's writing is clean and crisp and very well edited. The pace clips along and there are no slow bits. I was never tempted to skip ahead. I was happy to see that the dialogue is written in modern English with no manufactured words or stilted grammar meant convey an archaic language.

Overall: I really enjoyed diving into the prehistoric world of Raven and Leaf. I read Auel's books back in the day and was a huge fan. I found this book equally enjoyable.

Recommendation: I would highly recommend The Braided Stream to fans of Jean Auel, you're sure to enjoy it. Anyone who is curious about prehistoric peoples and how they may have lived. There is a fair amount of 'conjugal relations' in the book, but it is not graphic and in keeping with the rest of the book.