1859: A Bad Year for the David Thornton Family

The news of late is full of talk of the current flu season, and how virulent the current edition of the virus is.  The local TV news showed reporters questioning people about whether they had had a flu shot, many had but a surprising number had not. This made me think about the David Thornton family who lived in Wheelock, Vermont who suffered a tremendous loss during a flu epidemic in 1859.
David Thornton was born in Canada East in 1808. His parents were Samuel and Katherine Baker Thornton, both from Campton, New Hampshire. The Thornton family eventually settled in Wheelock, Vermont. David married Lydia Clark, born in Wheelock, daughter of Dudley and Polly Folsom Clark.  The Clarks were also from Campton, New Hampshire, in fact the marriage occurred in Campton.
In the 1850 census, David and Polly  as well as her parents lived with their children on the farm.  Next door, was David's brother John, who lived with his family including their Samuel and Katherine Thornton. A third brother, Samuel, who was my ancestor, lived in Greensboro, Vermont.
Influenza epidemics are nothing new.  The worst on record was the 1918 "Spanish Flu" which killed approximately 25,000,000 people worldwide.  There was an epidemic in 1793 that seemed to have centered on Vermont, it was a "putrid fever" and influenza which killed over 500 people in 5 counties in four weeks. In 1857-1859 there was a world wide out break of the flu that was described as "extremely severe". 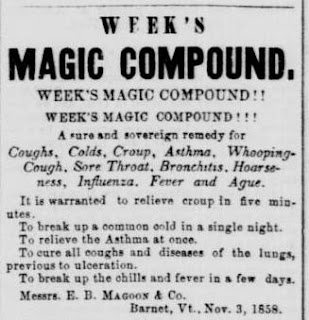 There was no flu shot, no Tamiflu, not even a dose of NyQuil to ease the symptoms.  What they did have was a whole lot of quackery  like Week's Magic Compound. This ad is from the December 30, 1859 edition of the Burlington Free Press.  I guess a desperate person will try anything.
On 6 Feb, 1859 eight year old Sumner, 6 year old Adoniram Judson and 3 year old Frank Andrew Thornton died. I cannot fathom the pain that the parents must have felt. A few weeks later on 19 March 1859 Keziah C. Thornton, aged 20 died. I do not know for sure that they died of influenza, but I am sure that they died of some type of infectious disease.
In the 1870 census the David Thornton family had left Wheelock and returned to Campton, New Hampshire. David and Lydia's oldest son, John, died in 1873. The remaining children outlived their parents.

Sources:
Chronicling America, The Burlington Free Press, December 30, 1859
Wikipedia, list of epidemics
Adoniram Judson was a Baptist minister from Salem, MA.  At first I thought the name was a typo, but apparently he was named for this man.
- January 17, 2013