1846, the height of the Irish Famine.  The province of Connacht, including the counties of Roscommon and Mayo, was ground zero for death from starvation and flight from Ireland is in full swing.  America, Canada and Australia were prime destinations, but so was England and it's growing cities, fueled by the Industrial Revolution.  Manchester, on the west coast of England was booming, driven by the manufacture of textiles, especially cotton, and it was only a short boat ride away.
The Irish immigrants flooded into Manchester looking for jobs.  They  tended to congregate in one area on the east side, known as "Little Ireland". By 1841 a tenth of the population of Manchester was Irish, most of the immigrants came from the West Country of Ireland.
The overwhelming majority of those immigrants left Ireland because of poverty.  But in Ireland they were living off the land and were probably unprepared for the condition in which they would find themselves. Fredrick Engles described Little Ireland as follows:

"The New Town, known also as Irish Town, stretches up a hill of clay, beyond the Old Town, between the Irk and St. George's Road. Here all the features of a city are lost. Single rows of houses or groups of streets stand, here and there, like little villages on the naked, not even grass-grown clay soil; the houses, or rather cottages, are in bad order, never repaired, filthy, with damp, unclean, cellar dwellings; the lanes are neither paved nor supplied with sewers, but harbour numerous colonies of swine penned in small sties or yards, or wandering unrestrained through the neighbourhood. The mud in the streets is so deep that there is never a chance, except in the dryest weather, of walking without sinking into it ankle deep at every step. In the vicinity of St. George's Road, the separate groups of buildings approach each other more closely, ending in a continuation of lanes, blind alleys, back lanes and courts, which grow more and more crowded and irregular the nearer they approach the heart of the town. True, they are here oftener paved or supplied with paved sidewalks and gutters; but the filth, the bad order of the houses, and especially of the cellars, remain the same." 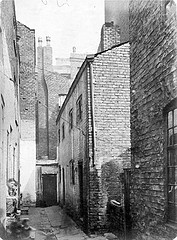 Many, if not most of those immigrants traded one poverty ridden life for another.  In one study it was shown that over 18,000 Irish lived in dank, windowless cellars.  The Irish who lived upstairs fared no better, sleeping three or more to a bed, no sanitation and no running water. Life expectancy was half that of the upper classes and in one year the infant mortality rate was 570 per 1000 live births.
An alternative job to working in the Cotton Mills was Hawking.  The majority of hawkers (peddlers) were Irish.  I suppose this was marginally better than being cooped up in a factory all day, but they had to work rain or shine or cold outside, so maybe it was a trade off.
So these are the conditions into which my ancestors found themselves when they left Roscommon, Ireland sometime after 1843 and the 1851 census.  (their last child was born in Ireland in 1843 and they are found in the 1851 census).

John Lynch was born in Roscommon around 1788. He and his wife Bridget and their children: Michael, Thomas, Catherine, Patrick and Mary are first found in the 1851 English census living on Brighton St. in Northeast Manchester.  John is listed as age 60, Bridget is 53 and the children are ages 25 to 10.  While John is an agricultural laborer the children are all hawkers.

In the 1861 census John Lynch age 69 is a laborer and Bridget 64 has no occupation.  At home are Catherine and Mary, both hawkers as well as son Patrick and his wife Mary and 4 month old child Ann.  Patrick is a hawker but his wife Mary is cotton spinner in a mill. Bridge probably took care of Ann and her other grandchildren so their parents could work. Oldest son Michael, now married to Bridget and with five children, also lived on Brighton St.  He and his wife are hawkers.  Thomas Lynch was also married, he and his wife Ellen had two children, they too lives on Brighton St.  Thomas was also a hawker. 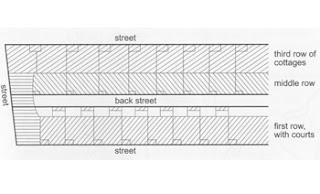 It's hard to tell on the map but Brighton St. seems quite short, yet there were a lot of houses on it.  Each house was probably only two rooms down and two up.  House were not only built side by side but another row backed up to the first.
The 1871 census shows big changes in the extended Lynch family. John was dead and Bridget his widow lived with her youngest child Mary. She was married and had two children, John Thomas and Michael.  James Banks her husband was a cotton spinner, Mary continued to work as a hawker.
Patrick and his wife and family are not found in the 1871 census. By 1880 they are living in Massachusetts, the first of the family to immigrate to the USA.
John and Bridget's son Thomas died in 1867 and his children were living with their Uncle Michael in 1871. Their mother Ellen may  possibly be dead, I cannot find her.
Also dead is John and Bridget's daughter Catherine Lynch Durr.  She was murdered by her husband Patrick in a drunken rage. He was arrested, tried and found guilty and hanged shortly thereafter at nearby Strangeways Prison.

If England was their promised land, it was sadly disappointing. Bridget died in 1873.  Mary her daughter and my direct ancestor was dead by 1879, only 36 years old, leaving 5 small children. The saddest story to my mind is that of Catherine Lynch Durr, sister of Mary.  She and her husband also lived on Brighton St, and her husband Patrick was from Roscommon in Ireland.  He was unemployed at the time of the murder and had previously done two years in prison. They were both described as alcoholics.  On the night of the murder, the 18th of August 1870, they both left the beerhouse and headed home together. Once home Patrick accused Catherine of pawning his shirt, which she denied, saying in was in the mangle.  Patrick obviously didn't believe her and strangled her with a piece of rope in front of their two children. Patrick was arrested on the 20th of August and was executed on the 26th of December of that year.

Hi, my name is Stephen Durr from Middleton and Patrick Durr and Mary are my great,great,great grandparents. I now live in London but was brought up around Manchester, I never knew about this side of the family until we began to research our name. It came as quite a shock.
We knew we had some relations in another part of Manchester but for some reason my late aunt Edith and my Father Wilfred Durr were never told anything about them. Thanks for the extra information. Steve