Sarah Shannon Leavitt my Mormon Connection
The story of Jeremiah and Sarah Shannon Leavitt is pretty well spelled out on the internet. In fact there are National Organizations of Leavitt Families which have done a fantastic job of studying the Leavitt Family since the arrival in America of our ancestor John Leavitt.  I don't have anything new to add to it and I am working backwards from the marriage of Sally Leavitt and William Rowell from a previous post.  If this gets too confusing I might reverse and start from the begining, but for now here is what I know about Sally Leavitt Rowell's parents.

beginnings
Jeremiah Leavitt was born on 10 July 1760 in Exeter, New Hampshire.  His parents were Nathaniel Leavitt and Lydia Sanborn.  Sarah, his wife, was born in 1766 in Chester, NH and her parents were Thomas Shannon and Anne Rand.  The two families were probably well known to each other.  In the 1790 census, the Shannon family is listed just above the Leavitts. Towns were large in size but small in population.

Jeremiah and Sarah were mostly likely married in Chester, NH in the mid 1780's, she was born and raised in Chester and that is where both their families were living. They were not married in Hatley, Quebec as is frequently seen in ancestry.com trees.  By 1790 they had two children as shown in the  Chester census. In 1800 Jeremiah, his father and several of his brothers were residents of Grantham, New Hampshire.  He and Sarah had seven children. Including Sarah (Sally) who would one day marry William Rowell. William was then living in Plainfield, NH just a few miles away and it is not to big a stretch to say that the families might have known each other.

canada
In 1792 the Government of Canada opened up the Eastern Townships for settlement, Americans looking for new land crossed the border and began the back breaking work of clearing and farming virgin land. Jeremiah left New Hampshire and began farming in Hatley, Quebec, Canada sometime after 1800.  Hatley is only about 15 miles from the US border, so they were able to keep a close connection with America. Samuel Thornton, another ancestor, also left New Hampshire and settled in Hatley for a while.  His grandson would marry Jeremiah's great grand daughter in 1885.

Jeremiah and Sarah had three more children after their arrival in Canada, although one of them was born in Vermont.  He and his five growing sons farmed their land until his death at age 57 in 1817. Life continued as usual after Jeremiah's death.  His children married and started their own families.  Sarah probably lived with one of her son's on their land. 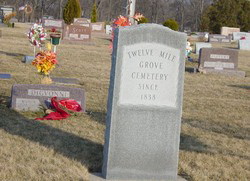 At some time in the mid 1830's the Leavitt family came in contact with the Book of Mormon.  Many of them became ardent converts, and about 1835 a large group of them left Canada and headed into the American West to join up with the "Saints".  According to Sarah the wife of Jeremiah Jr. about 23 of them left on 20 July, 1835, including her mother in law Sarah Shannon Leavitt, heading for Kirtland, Ohio.

The group stopped in Kirtland for a while before moving on to 12 Mile Grove in Illinois. That was the end of the line for 74 year Sarah, she died there in 1840.  Many of her children and grandchildren had died or would die the next few years as they made their way into Utah.

While I cannot say I understand the attraction to the Mormon beliefs that led many of these people to subject themselves and their children to that arduous journey which resulted in the early death of so many of them, I do admire their drive and determination. However, I am glad that my ancestor chose to stay in Vermont.