english origins
Valentine Rowell was the son of Thomas and Margaret Milner Rowell. He,presumably named for his Grandfather Valentine, was baptized 22 June 1622 in Mancetter, Warwickshire, England. He traveled with his father to America. None of his siblings made the crossing. 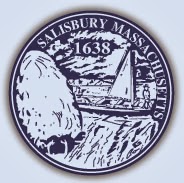 salisbury
Valentine like his father was a carpenter by trade. He settled in Salisbury with his father. He was granted lands in 1640, in the original division, and his name appears on the list of admitted "townsmen" in 1650. He too, bought and sold land during his lifetime. Although he took the oath of fidelity in 1646 he never took the Freeman's Oath, nor did he become a full member of the church.

his wife joanna
Joanna Pinder was the daughter of Henry and Mary Rodgers Pinder of Ipswich. It is not known when Henry Pinder came to America but he presumably came by 1635. His wife and children came in the boat the "Susan and Ellen" in 1636, Joanna was then fourteen years of age. Henry Pinder was born about 1580 and was married to Mary Rodgers at St. Mary the Great in Cambridge, England on 22 May 1614.   Henry lived in Ipswich until his death in February 1661.  His wife Mary died sometime before 1655 and he remarried the widow of Robert Andrews. Joanna and Valentine, both aged about 21, married in Salisbury on 14 Nov 1643.

At least two of their children died very young, both sons named John.  Nothing is known of the last two children, both girls, other than their births. In March of 1673, their daughter Mary and Thomas Freame were accused of having premarital sex and sentenced by the court: he to a whipping of 15 lashes and a fine of 4 pounds and she to 10 lashes and a fine of 40s.  To avoid their punishment, they choose to marry.

amesbury
In the mid 1640's settlers began crossing the river Powwow and building home sites there. Eventually it was decided that the town would be divided and a new town called Amesbury would be established.  Valentine Rowell was one of the first settlers to establish the new town.  On the "first of the third, 1655" Valentine signed an agreement to remove to the new town.  In May of 1658 he received 40 acres of land. The map, below, from the 1800's gives you and idea about the location of Salisbury, the Powwow river and Amesbury.

Valentine does not appear to have held any town offices, he is most often mentioned in land deeds and conveyances. His son Thomas received land in Amesbury in what was known as the Children's lot, one child from each family was allow land in that division.

rip
Valentine died May 17, 1662, in his prime, aged about 40. His oldest child was 18 and his youngest was three. His widow, Joanna administered his estate. Joanna remained a widow for some years, this was fairly unusual as most widows with young children remarried quickly. She married (second) September 18, 1670, William. Sargent, and (third), October 26, 1676, Richard Currier.  Joanna died in October 1690. 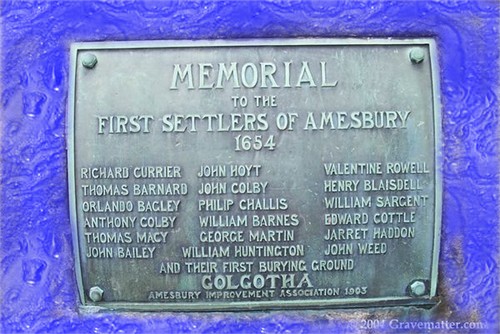