Ancestry of Dorothy Yorke, wife of Thomas Dudley of Massachusetts 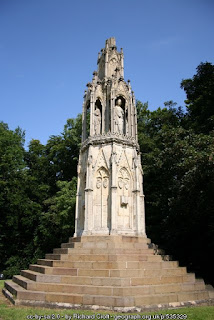 I was intending for my next blog post to be about the ancestry of Thomas Dudley, one time Governor of the Massachusetts Bay Colony. It is still in the works but I got sidetracked by the ancestry of his wife Dorothy Yorke. Her ancestry on wikitree caught my attention and I had to stop and reroute my research her way. I was looking at her ancestors profiles on wikitree and found them to be unsourced past that of her father Edmund Yorke. A quick look at ancestry and other web based sites show a variety of ancestral choices. Whose right, whose wrong? Let's look at our options.

what do we know about edmund?
What can be said to be certain about Dorothy's parentage is that her father's name was Edmund Yorke of Cotton End, Northampton. He wrote his will on 18 November 1614 in which he was identified as a Yeoman. He asked to be buried in the churchyard at Hardingstone. He identified his wife as Katherine and named five children; sons Nathaniel, Bartholomew and Joseph and daughters Dudley and Green. He also identifies three grandchildren; Samuel and Anne Dudley and Abigail Green. [1]

Sir John Yorke and Ann Smith
I can see why this couple would be a popular choice for parents of Edmund. Sir John was Master of the Mint in London, member of Parliament and close friend of Edward de Vere, Earl of Oxford.[2] He was the great grandson of Sir Richard Yorke, Mayor of Yorke. John married Anne, the daughter of Robert Smythe of London. [3] John's sister Margaret married Bernard Frosbisher and their son was the explorer Martin Frobisher.

John and Anne did indeed have a son named Edmund. Unfortunately, he was not our Edmund. Edmund Yorke was the third surviving son of John and Ann. He married Margery Worley by 1572. She was the daughter of Richard Warley of Middlesex. The couple had four children; Edmund, Edward, Marie and Aubrey. He wrote his will in 1585 calling himself Edmund Yorke, Esq. of Middlesex in London. His will was probated by his son Edward on 22 March 1597. [4] Clearly, this is not Edmund of Cotton End.

Richard and Joan Darcy
Right off the bat this has a major error. Richard Yorke married Elizabeth Darcy, not Joan. Elizabeth Darcy was either the sister or daughter of Thomas, Lord Darcy, but this remains unconfirmed. She died in 1551; Richard died in 1528. They were not the parents of Edmund of Cotton End. [5]

gilbert yorke and amy bond
On 16 May 1557 Gilbert York married Amy Bond at St. Michael Cornhill in London. [6] That is all we know about this couple. How did we make the jump from this marriage to connecting them with Edmund of Cotton End. I have no idea. Well, actually I have an idea. A web based family tree called Adupree.com claims that Gilbert York was from Hardingstone and married Amy Bond. Proof of this seems to come from a mention in a book called The three voyages of Martin Frobisher in search of a passage to Cathay and India by the north-west, A.D. 1576-8. Martin Frobisher was an English explorer who was looking for the North-West passage. One of his fellow Captains was Gilbert York.

Martin was a darling of the Elizabethan Court and his voyages were funded by wealthy English "Venturers" who put up the capital in hopes of making a profit. One of the "Venturers" listed in the book was William Bond. [7] Martin Frobisher was also nephew of Sir John Yorke and Ann Smith, making him a cousin of the above mention Yorks. [8] Although this is all very interesting and I enjoyed reading about Martin Frobisher, it has nothing to do with Edmund York of Cotton End. Now in adupree's defense, the author does state that any name that is in all caps is dubious and without proof. This warning seems to have been ignored by many researchers.

If your interested in Gilbert York, the adupree site list his father as Edward/Edmund York of Bugmore and his wife Grace. All names in caps, so we know there is no proof. This is the same ancestry given on wikitree. I think it's wrong. I found a probate for a Gilbert Yorke whose estate was probated in June 1596, he died at sea! [9]His entire estate went to the children of his deceased brother George York of Crondall, Hampshire. Gilbert and George were the sons of Sir Thomas Yorke of Ashby de la Launde, great grandsons of Sir Richard York. [10] George and his wife Mary lived at Crondall in Hampshire. Whether I'm right or not doesn't really matter, it doesn't get us any closer to who was the father of Edmund York.

So, who was the father of Edmund York, I don't know.

enough about dad, who was mom?
Edmund's wife, at the time of his death, was a woman named Katherine. Was she the mother of his children? We don't know. Her surname is frequently said to be Fairfield. I cannot find anything that would lead me to believe that this is correct. What I did find was a marriage of Edmund York of Hardingstone to a Katherine Robbins on 7 September 1568.[11] Dorothy Yorke was born in 1582, this could well be her mother. But I don't have any proof.

katherine's will
A woman named Katherine York made a nuncupative will (a verbal will) and died in 1633 in Northampton. The witnesses of her will were the Vicar of All Saints, the Parson of Abingdon and another man. All of her goods went to a Baker and two other men whom she owed money. If she was our Katherine, I say if because there is no proof of this, then she was an elderly woman by then. She was probably being taken care of by these men in exchange for her estate. 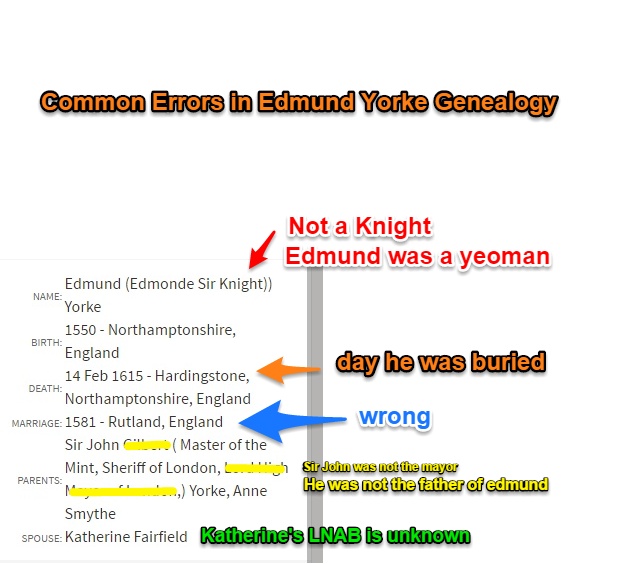 [2] Nina Green, "THE NATIONAL ARCHIVES PROB 11/51/58," The Oxford Authorship Site   (http://www.oxford-shakespeare.com/documents.html : accessed 19 April 2016) [summary of the the will of John Yorke with research notes]