This is a continuation of the Fettiplace Ancestry of Governor Thomas Dudley of Massachusetts......

John Fettiplace was born about 1424, most likely at his parent's estate of East Shefford in Berkshire. His father was Thomas Fettiplace and his mother was Beatrice, a Portuguese woman who was possibly descended from King Alonoso III through an illegitimate son.He was the second son of a fourth son. If he was going to earn a living he was going to have to work for it. And so he did. 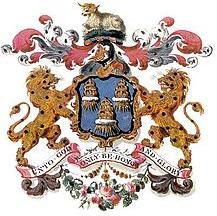 John, in later life, was a citizen of London and a Draper by trade. A Draper was a merchant who dealt in fabrics. John would have begun his career as an apprentice, eventually becoming a full member of the Draper's Guild. Although J. Renton Dunlop felt he was only an honorary member, it would seem that he was inde
ed a working Draper and he eventually became a very rich draper. but, back to the beginning.

order of the garter
In 1447 the King's brother, Duke Humphrey died suddenly. He had been one of the 24 Knights of The Order of the Garter. There were several good candidates to fill the now vacant spot, but the honor went to King Alphonso of Portugal. King Henry commissioned the garter from the London goldsmith Matthew Philips. The garter was not the stretchy thing you see thrown at weddings, it looks more like a small blue belt, that when buckled was/is worn around the left calf. Of course it would be covered with jewels or pearls and the buckle would be made of gold. Along with the the garter went the sumptuous robes worn by the recipient.  Once completed these items had to be delivered to King Alphonso, in Portugal. Who better to deliver them than John, son of Beatrice, a descendant of the royal house of Portugal. John was paid the hefty sum of 40 pounds for his expense.

How did John come to the attention of Court and allowed the honor of this mission. I think it was probably the Earl of Shrewsbury, who was close to the Royal Family who was the instigator of John's rise. John Talbot, Earl of Shrewsbury was the brother in law to John's mother, Beatrice. She had been married to his brother, Gilbert.

esquire to the body
In 1455 John was a member of the Royal Household and no less Esquire to the King's Body. The King in question was the ill fated Henry VI. His Queen was Margaret of Anjou. The job of esquire to the body was one of an attendant of the King. They helped him dress and undress, they were around him day and night to meet his every need. How John achieved this appointment is unknown. Although it has been suggested that his mother might have had some influence I am more incline to believe that it might have been his mother's brother in law, The Earl of Shrewsbury, who might have brought John into the royal sphere.

wool merchant
The 15th century was the heyday of the wool market in England. Men could become fantastically rich dealing wool and the cloth made from it. The best wool in Europe was from England, the best weaver were in Flanders. The raw wool was shipped to Flemish ports and returned to London for the Drapers to sell. John set himself up as a wool merchant in the section of London called Lothbury. There is still a Lothbury Street in London, but the area was all destroyed at the time of the Great Fire including the parish church of St. Margaret's of Lothbury.

marriage
In the late 1450's, John married the widow Joan Fabian Horne. Her husband had been Robert Horne. He was a very successful fishmonger who served as both Alderman for the Bridge Ward and Sheriff of London. He is best known for his part in the rebellion known as Cade's Rebellion which tore through London in 1450. This rebellion was a protest by men in Kent and Sussex against the inept government of Lancastrian King Henry VI. Although first welcomed by the citizens of London, they rebels quickly lost their favor when they looted the city. Robert Horne was throw in prison and only escaped with his life by paying a huge ransom. This rebellion was the beginning of the undoing of King Henry and eventually lead to the War of the Roses.

Joan was the daughter of Edward Fabian. When Robert died he left her with four small children and a large bank account. I doubt she was widowed long. Joan and John had four sons, Richard, Anthony, Thomas, and William and one daughter Margaret.

1460
Whatever influence John had accrued at court as Esquire to the Kings Body and from the Earl of Shrewsbury came to a screeching halt on 10 July 1460 at the battle of Northampton. The King was captured by the Yorkist forces and the Earl was killed defending him. In March of 1461 England had a new King, the Yorkist King Edward IV. Henry would briefly regain his throne in 1470 but John was dead by then. 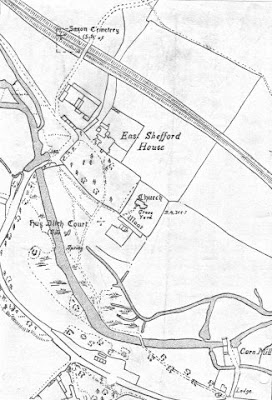 John certainly did honor both his parents with a fabulous alabaster tomb in their small church of St. Thomas in East Shefford. The tomb remains today in the now protected church, a cold silent monument to ancestors long gone. John himself died in 1464, leaving his widow once again holding the bag with a gaggle of small children. John had a will and left his children a small fortune. Their Uncle James Fettiplace was charged with managing their estate until they came of age. John's heir was his eldest son Richard. Unlike his father he was not in trade, but lived the life of the landed gentry in Berkshire on his estate of East Shefford.

john estbury
Joan remarried, again rather quickly. Her third husband was John Estbury of Antwick's Manor in Berkshire. He was probably no stranger to Joan as his manor was only a few miles from East Shefford.  In fact the manor of East Shefford was owned by the Eastbury Family in previous century. When Joan died she was buried next to John Fettiplace at St. Margaret's Lothbury. Joan's date of death is unknown.

errors
The internet is full of errors. Here is just one example of an error laden webpage:

Marriage 1 Jane widow of John Horne 'Alderman of London' FABIAN b: CA 1430 in of London and Berkshire, England

be careful out there!