William Sanborn was one of three brothers who immigrated to New England by around 1640 with their maternal grandfather, the Reverend Stephen Bachiler. And yes, this story about three brothers, John, William and Stephen is really true. Their story is, like all of my Puritan ancestors, one of fortitude and bravery. Here's what I know about William Sanborn.

english origins
The mother of the three Sanborn men was Ann Bachiler. Her name comes from of a book of Licenses to Pass Beyond Seas which includes the names of their grandparents and their mother, Ann Samborne, described as 30 years old and a widow. There were travelling to visit her brothers and sister in Flushing in Holland. Presumably the Rev. Bachiler desired to see his children prior to immigrating to New England. The license was dated July 1631. They were to return within two months. [1]

Ann was born about 1601 in Wherwell, Hampshire. Her father was, as indicated above the Reverend Stephen Bachiler and his first wife, Ann Unknown.

On 20 January 1631/2 Mrs. Ann Sanborn married Henry Atkinson.[2] Nothing more is known about Ann, the mother of William and his brothers. So, who was his father? This question has been asked since the late 19th century and no one has the answer yet. Likely candidates have been put forward, but there is no definitive proof for any of them. Some Internet genealogies seem to have chosen a father from the list, but this is a mistake on their part. The Sanborn family was researched extensively by Victor Channing Sanborn and his work published in 1899. He includes a description of men he believed might have been John's father, they include:

Of the proffered choices, V. C. Sanborn gave the most creedence to William of Brimpton. He, without proof, also attaches this William to Edward Samborne, brother of the Rev. James Samborne. He admits that this is only his theory, and to this day no one has been able to prove it.

The Sanborn Family Association in its continuing search among English records for the father of the three Samborne brothers who settled in Hampton with their maternal grandfather, Rev. Stephen Bachiler....[4]

This article is hosted on the website of  Lane Memorial Library of Hampton, New Hampshire. They have an amazing database of genealogical information about early immigrants to New Hampshire. According to their database the father of the three Sanborn's is unknown. [5]

The latest writing on the ancestry of the Sanborn boys is included in the entry of Stephen Bachiler, specifically his daughter Ann was married to Unknown Sanborn. [6]

immigration to new england
Stephen Bachiler immigrated on 9 March 1632, sailing aboard the William and Francis. Records indicate that he was accompanied by 'his family.' It is assumed that with him were his third wife, Helena and his four grandsons, the three Sanborns and Nathaniel Bachiler. I can imagine how excited the young boys were at the great adventure ahead, and I wonder if they realized they would never see their mother again. The ship docked  in Boston on the third of June. On the eighth of the month Reverend Bachiler began his ministrations as the minister of Saugus, now known as Lynn. [7]

The Reverend  was a somewhat contentious fellow and he struggled to fit in with his Puritan brethren, moving every few years until finally settling in Hampton in the Colony of New Hampshire in 1638. His grandsons accompanied him on each of his moves and settled with him in Hampton. 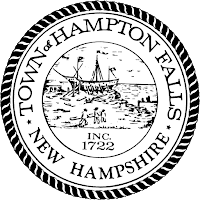 William was born about 1622 so he was not yet a teenager when he first landed in New England. By the time his grandfather founded the town of Hampton, he was nearing his majority. His name first enters the Hampton records in 1639 when he was given  the job of bell ringing before the Sunday meeting and other important town meetings. In the days of no clocks or watches, the bell ringer kept everyone on time.

The following year, 1640, William was given a house lot and land. His plot was near his brother John's, on the road to the sea. It seems somewhat unusual for a teenager to be awarded land, but his grandfather did found the town, so William and his brothers were given lots. [8]

William's grandfather continued to run into trouble with the Puritans in Massachusetts who absorbed the colony of New Hampshire in 1641. Stephen Bachiler moved out of their reach, resettling in Strawberry Bank. This time his grandsons stayed put. Eventually Stephen left New England altogether, returning to England in 1651. [9]

Of the brothers, John would go on to become the most prominent, but William has his share of civic duties. He was chosen selectman multiple times beginning in 1651, the year he took the Freedman's Oath.  He served during King Philip's War, a conflict which nearly drove the English out of New England. Also in 1676 he acted as the town constable, a year long post.

A review of land deeds shows that William participated in the buying and selling of land that was so common in those days. There are two deeds in which he gives land to two of his sons, William and Josiah. 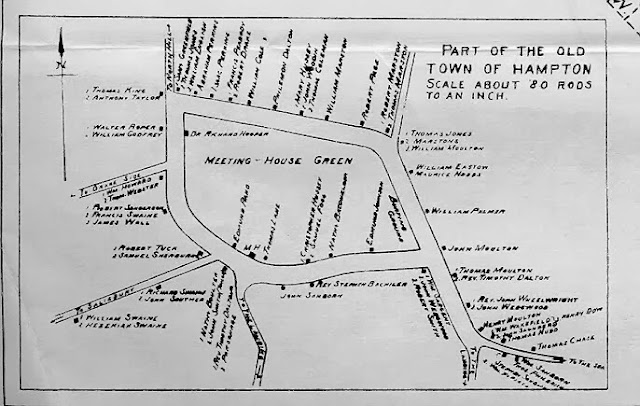 marriage and family
The date of William's marriage to Mary Moulton, daughter of John and Anne Green Moulton is not known. The birth of their sixth child was recorded in 1660, and as most women had a child about every two years, we can guesstimate that they were married around 1648. Their children were:

Remarkably, it seems, all of their children lived to adulthood and married. In an age of high infant mortality this was a rare feat.

rip
William died at age 70 on 18 November 1692. His will is incomplete, but in it he makes provisions for his wife Mary. He made provisions for his four sons, William, Josiah, Mephiboseth and Stephen. Despite deeded land to to William and Josiah, he still has an estate valued at £409.

hampton stones
The meeting house green in Hampton is lined with stones imbedded with plaques bearing the names of the original settlers. It's pretty amazing to walk around and see all these families to which I am related. Below is the Sanborn stone. 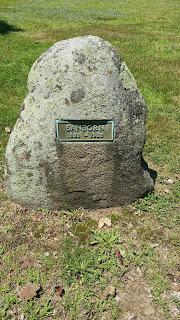