Dover, New Hampshire, Hatevil Nutter and the Quaker Problem of 1662 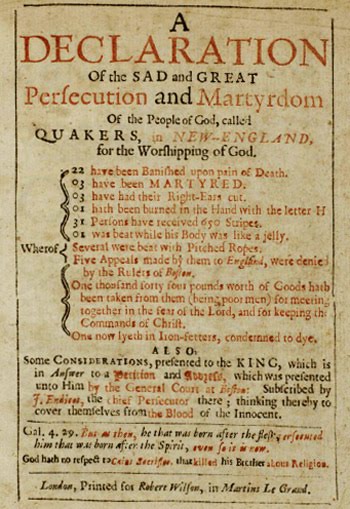 What do you think of  when you read the words, 'religious radical'? A few images spring to my mind. A fiery preacher raining hell and damnation on his flock, pointing a finger at those who do not follow his theology, of which he is certain is the only way to salvation. Most religions have some variation of radicalism. I don't have to give you a list, you can create your own. One religious denomination which would not make my personal list would be the Quakers. I live in a town founded by Quakers. They seem to be very nice people, they are known for their peacefulness. A well known early Quaker, Margaret Fell, wrote to King Charles II:

"We are a people that follow after those things that make for peace, love, and unity; it is our desire that others' feet may walk in the same, and do deny and bear our testimony against all strife, and wars, and contentions that come from the lusts that war in the members, that war against the soul, which we wait for and watch for in all people, and love and desire the good of all."

Today, they are known for their pacifism and anti-war stance, they would appear to the the antithesis of radicalism. And yet, their arrival in New England in the 1650s and 1660s was regarding as something akin to a visit from the devil himself with all his plagues in tow.  The Massachusetts General Court issued an indict in October 1656 that said:

"Whereas there is a cursed sect of heretics recently risen up in the world, which are commonly called Quakers, who take it upon them to be immediately sent from God, and infallibly assisted by the spirit to speak and write blasphemous opinions, despising government, and the order of God in church and Commonwealth, speaking evil of dignities, reproaching and reviling magistrates and ministers, seeking to turn people from their faith and gain proselytes to their pernicious ways..."

What followed this lengthy proclamation was a list of punishments for those who provided transportation to Quakers into the Colony, gave aid or shelter to Quakers, were found to have Quaker books or pamphlets or was found to be a Quaker.

The first Quakers to arrive in Massachusetts were two women, Mary Fisher and Ann Austin, who traveled to Boston from Barbados. They were taken into custody, their papers burned, their bodies searched for witch marks. After a stint in prison they were sent back to Barbados. Many early Quakers shared their fate, imprisonment, whipping then banishment. But the Quakers were a persistent bunch and by 1658 the Massachusetts General Court, in order to deter further arrivals, adopted the death penalty for returning Quakers. In 1659 three people, two men and one woman, Ann Dyer, were hung in Boston. More followed their fate.

In 1662 the Quaker problem came to a head in Dover. The presence of three Quaker women did not sit well with some of the leading males of the town including Hatevil Nutter. Nutter was an elder of the church, served as a selectman, town moderator and justice of the peace. Hatevil crafted a petition, signed by his neighbors, and sent to the General Court craving assistance with the Quakers. The General Court's answer:

"...it is ordered that Captain Richard Walderne shall and hereby is empowered to act in the execution of the laws of this jurisdiction against all criminal offenders within the said town of Dover, as any one magistrate may do until this court should take further order." 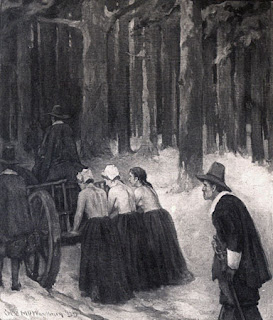 To the constables of Dover, Hampton, Salisbury, Newbury, Rowley, Ipswich, Windham, Lynn, Boston, Roxbury, Dedham, and until these Quaker Vagabonds are out of this jurisdiction You and every one of your are required in the King's Majesty's name to take these Vagabond Quakers, Anna Coleman, Mary Tompkins, and Alice Ambrose, and make them fast to the cart's tail, and drawing the cart through your several towns, to whip them upon their naked backs, not exceeding ten stripes apiece, on each of them in each town, and so convey them from Constable to Constable till they are out of this jurisdiction, as you will answer it at your peril, and this shall be your warrant." (Provincial Papers, I:243)

Constables, brothers John and Thomas Roberts, arrested the three women. They were brought to the meeting house on High Street on Dover Neck. Deputy Walderne had the women stripped to the waist, and according to Sewell's History of the Quakers, had the women 'cruelly whipped while the Priest stood and looked and laughed. They were then sent to Hampton, the next stage of their journey to Boston. Accompanying the women was Doctor Walter Barefoot, a resident of Dover Neck. Perhaps he went to attend to the women's medical needs. In Hampton the women received their lashing and were sent on their way.

In Salisbury, they encountered a merciful reception. Major Robert Pike and Dr. Walter Barefoot concocted a plan. A boat was hired that carried the women to the home of Major Nicholas Shapleigh who lived in Kittery, Maine, just across the river from Dover Neck. There they received treatment for their wounds and were treated with hospitality.

The women remained in the area but damped down the ardor of their preaching. In time, the persecution of Quakers ceased and approximately one-third of the population of Dover called themselves Friends. It would seem then, it was the Quakers, not the Puritans who fought for religious liberty, the freedom to worship as they saw fit. King Charles II gave the Quakers the right to worship as they saw fit.

Hatevil Nutter has borne the brunt of the blame for the whipping and persecution of these women in New Hampshire. I'm not sure he deserves our censure. Hatevil was a product of his time. A staunch believer who saw chaos and strife in those who chose to go their own way; individualism is a tenet of Quaker belief. He sought to maintain order and regiment in a world very different from ours. I doubt I'd like him or him me, but I cannot hold him to the standards of this day, even as I despise his actions and those of my ancestors who lived alongside him. I'm sure they were they standing at the meetinghouse gaping at the Quaker women as they were cruelly whipped. I can only hope they cringed at the scene before them and felt some measure of pity for those poor souls. 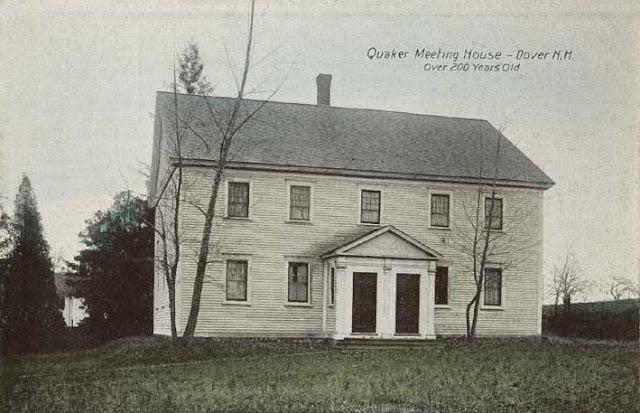 Be on the lookout for my next book: Pine Tree House, coming in 2020.