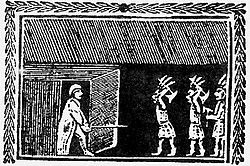 I am currently researching the violent clashes between Native Americans and the English settlers who rapidly expanded into tribal lands and threatened their very existence. Growing up in the pre-computer age, I can remember playing 'Cowboys and Indians'. John Wayne was a hero and Custer's Last Stand was bravery personified. The West, during much of the 19 century was the battlefield and the settlers the ultimate winner of the spoils of war.  But what of those early days? What about the East?

In 1675 the Native Americans along the North East coast banded together under the leadership of a Wampanoag man named Metacom in his native language but known as King Philip to the Colonist. This war, King Philip's War, was a full-out assault on the colonists in Rhode Island, Massachusetts and Connecticut. Together with warriors from  Nipmuck, Pocumtuck and Narraganset tribes brought death and destruction to the Colonist,  their combined efforts all but drove the colonist into the sea. But this was also a war between Native Americans. The Mohegans and the Mohawks of New York, allied themselves with the English and fought against Metacom and his coalition.  For the better part of 14 months, Metacom and his warriors ravaged New England. He was captured and killed in August of 1676 and the fight gradually dwindled until the signing of a peace treaty in Casco, Maine in 1678. 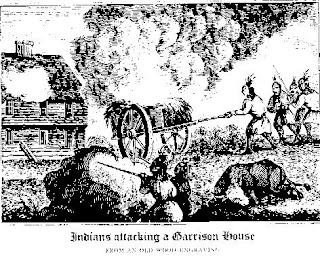 Peace did not last long. In 1689 King William of England declared war on France. As battles waged on the Continent, simmering tensions in the Colonies flared. Canada was, at that time, a French territory. The Governor, Louis de Buade, Comte de Frontenac, devised a three prong plan of attack against the Colonies of New York, New Hampshire and Massachusetts (Maine was part of Massachusetts). In the winter of 1690 a force attacked the town of Schenectady in New York, a second attacked Salmon Falls in New Hampshire and the third destroyed Fort Loyal in Maine. The loss of the Fort, near present day Portland, emptied the frontier.

Attacks continued for the next few years. Here is a list of some of the most noteworthy attacks: 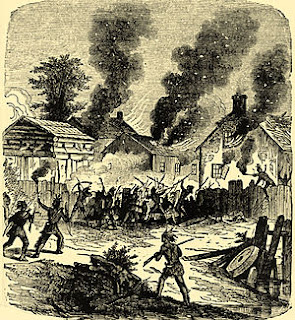 This is the majority of the larger attacks. The numbers may not seem significant but the population of these settlements was small, and so impact of losing males of working age had a huge effect on the economy and the ability of these people to survive. That these people survived at all is testament to their tenacity. King William's War ended 1697 but flared again in 1702 with Queen Anne's War.

For many Americans this is dry dusty information, naught but boring dates without meaning. But, each of the highlighted attacks is one in which one or more of my direct ancestors and or their family were killed or captured. If your family, whether they were of English descent or Native American, lived in New England in the 17th - 18th century it is almost certain that they were also affected by these wars. If nothing else the mental toll must have been enormous. In fact, Mercy Lewis, one of the Salem Witchcraft accusers fled the attack on Casco Bay in 1689, where her parents were both killed, leaving her an orphan and forced to work as a servant. It has been suggested that the psychological damaged inflicted by the war might have played a part in her role as an accuser.

In these days of political correctness and technology, I am sure that no child today plays 'Cowboys and Indians' as we did. But I can't help but think that long before there were cowboys, there were Colonists who fought, right or wrong, the Indians.

For a great book on King Philip's War I highly recommend The Name of War  by Jill Lepore. 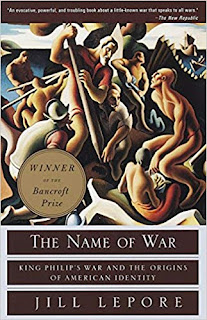 For a history of the Oyster River attack from a Native American prospective see this fantastic website. Ne-Do-Ba .
- June 09, 2019