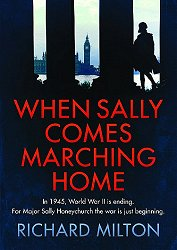 Plot: In 1946 Major Sally Honeychurch, finds herself demobilized and teaching in a girl’s school. Life is dull compared to her work in the war for the Special Operations Executive, where she spent two years behind enemy lines. She’s called back to action when the City of London . Sally must use all her training to save the city from destruction.

Characters: Sally Honeychurch, tall, blond and smart, is a well drawn and believable character. I quickly her on, a spunky woman in a male-dominated world. But she is not without her flaws, which makes her human and a better hero. I appreciate that the ‘bad guys’ are also human, a mixture of good intentions and evil outcomes. The men who help and hinder her along the way, overcome their male bias against her as she races to save the day.

History: The author in English history before, during and after the war. I found the book fascinating from a historical standpoint. I enjoyed learning about the rise of Fascism in England in the pre-war years and some interesting tidbits concerning HRH Edward, Duke of Windsor. Woven through the story are many ‘real’ characters which added a sense of reality to the story.

Writing: Told in third person, past tense, the book zips along. It , the pace is fast, the story action packed. Although there is historical information packed between the pages, it never bogs down the story. The last few chapters will have you on the edge of your seat. The resolution of the story does not disappoint.

Conclusion: I really enjoyed this well written action-packed story. A sharp clever main character and a page turning story make for a winning combination. I don’t give out many five stars, but this one fits the bill.