While doing research on my ancestors I frequently search the  records of the Quarterly Court of Essex County to see if they have either been on a Jury or in front of Jury.  The records include  civil and criminal cases brought before the court. Many of the cases are serious crimes, but just as many are seemingly frivolous occurrences that hardly warrant the involvement of the courts never mind arrest and punishment. But these are Puritans that we are speaking of, so nothing should surprise us.
Here are two case which I found really funny, I guess the Court was not so amused. I have copied it word for word with their spelling, not mine.

At the Quarterly Court held at Salem on 1 12  1641 the following was recorded:

Daniell Owls to pay 2s. or sit in the stock for "Leaping and dancing at his house and had like to fale into fire he answered I do not care for the best maiestrat in the Land. If mett them in the field I should slash them for I have beene a pretty fellow in my tyme". Complained of by Mr. Pester. 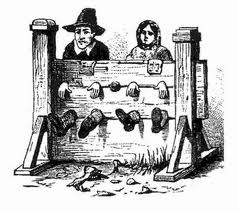 This case was immediately followed by this terrible crime:

Mr. Ruck presented by Mr. Edmund Batter for baking of white bread contrary of order to the court and for allowing tippling at his house. Ruck to be admonished, fined 20s. and cautioned concerning leaving the ordinary.