Writing this blog really brings home the name family connections as it relates to the interwoven lives of my early ancestors.  Christopher Osgood was married twice, his first wife was buried in England, his second wife buried him in New England.  This second wife, Margery Fowler became the wife of another ancestor, Thomas Rowell. Although I am not related to her in anyway, that I know of, she was married to two of my ancestors. She was to marry twice more in her lifetime. I have two Mary Osgoods in my family, one the daughter of Christoper and one the daughter of William of Salisbury.  There was also a third man named Osgood in New England, John Osgood.  Many people try to connect these three men as family but there is no proof of any relationship, yet. Given the lack of potential partners and the need to be married, it shouldn't come as any surprise that there were so many interconnections.  It makes for an interesting family tree. 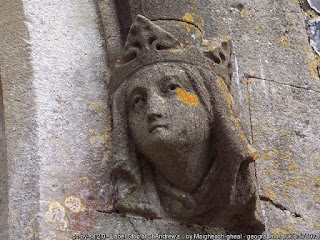 Christopher Osgood was born near Marlborough, England in a tiny village called Newton Tony in the county of Wiltshire.  Marlborough is said to be the legendary burial place of Merlin the Magician from the King Arthur story.  In 1642 the town paid a heavy price for backing Parliament over King Charles, the town was sacked by the King's soldiers and many buildings burnt.  If Christopher left family behind when he left for Massachusetts they may have be greatly affected by those events.

Christoper was baptized in St. Andrew's church on 17 April 1606, the son of Thomas and Margaret Skeat Osgood. [1] He was the fifth of nine children. His mother died when he was only ten years old. Margaret's youngest child was still a baby when she was buried on 1 May 1616. Christopher was the only child in the family who immigrated. I guess he couldn't talk any of his six brothers into joining him in his adventure. 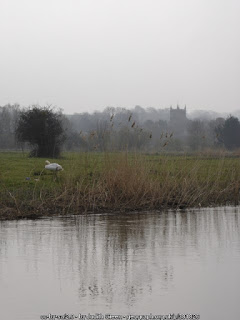 parents The Osgood family was well established in the local area. Thomas Osgood, Christopher's father, was born, probably in Newton Tony in about 1570. He and Margaret were married in St. Andrew's on 13 July 1595.[2] Thomas, unfortunately for us, died without a will, his son Thomas Osgood Jr. and William Skeate posted bond on the estate on 16 June 1634. The inventory of his estate was taken two days later, the value was a meager 12 pounds. [3]

Margaret, wife of Thomas, was probably one of two daughters so named, by Roger Skete of Downton, Wiltshire, whose will was proved on 16 April 1578. Roger's will named possible mother of Margaret, Alice and his children including the two Margarets. Roger was the son of Thomas Skete of Downton, who wrote his will in 1553. Roger's mother was also Alice. [4]

grandparents
Christopher the immigrant was named for his grandfather Christoper Osgood, also of Newton Tony. Christopher, the elder, was under the age of 20 when his own father, John Osgood, made his will in 1553, meaning he was born between 1552 and 1533. Christopher married Alice who was buried in Newton Tony on 16 December 1596. Christopher remarried on 30 October 1599 at St. Thomas in Salisbury. His second wife was the twice widowed Elizabeth (Nycholes) (Maylard) Brockwell. She was a widow for the third time in 1607 when Christopher died. [5]

great grandparents
Christopher's great grandparents were John and Jone____ (Carpenter) Osgood of Newton Tony. John was a husbandman. It is possible, but not proven, that John was the son of Richard Osgood of Over Wallop, Hants who named son John in his will dated 1543. [6]

So, if I have confused you with this ancestry, it should look like this: John, Christoper, Thomas and then our Christoper the immigrant.


marriage
Christopher's first wife was Mary Everett. The pair were married on 21 April 1632 in the beautiful St. Mary's church in Marlborough. [7] It was not to be a long marriage. Mary gave birth to their only child, a daughter, on 17 March 1632/3, she was buried a littler more than a month later, on 22 April 1633.  As with most widowed men with small children, Christopher wasted no time in finding a new wife. He married Margery Fowler a little more than three months later on 28 July 1633. They were also married at St. Mary's.

Margery was baptized at St. Mary's in Marlborough on 25 March 1615. [8] She was the daughter of Phillip and Mary Fowler of that same town. Phillip was a cloth worker by trade. On the 24th of March 1633/4, Phillip, and his wife Mary along  their children, including Margery and Christopher Osgood boarded, at Southampton, the sailing ship the Mary and John and left England forever. [9]

The Osgoods and the Fowlers began their new lives at Ipswich, a plantation, barely established in 1633 by John Winthrop Jr. son of the Governor John Sr. So in effect, they traded a life in a bustling, busy English market town for the wilderness of Massachusetts.Christopher was a brick maker by trade, which should have come in handy in a land with no houses or other buildings. Christopher was also a member in good standing with his church, this allowed him to take the freeman's oath on 6 May 1635. [10]

The first town meeting and division of land occurred in August of 1634, there was no mention either Christopher or Philip. At the town meeting of 5 Jan 1634/5 both men received their first lot of land consisting of 4 acres of marsh and meadow lying northward of town. A few weeks later, on the 26th of Jan. both men were given an additional 6 acres for them and their heirs forever. Christopher continued to receive land as the divisions continued.

In January of 1642 and in 1650 Christopher was selected as a juryman.  The early settlers seemed to drag every minor offense into court, charges of trespass, slander, defamation, fines for this and that. They were a very litigious bunch   In 1645 he was on the grand jury, and again in 1648.

Christopher wrote his will on 18 April 1650.  He was probably a fairly young man by today's standards.  If he was born in 1607 then he would have been only 43.  His will was not probated until October of that year. Did he have some lingering illness, we will never know.  He left behind his wife Margery, daughter Mary by his first wife and Abigail, Christopher, Elizabeth and Deborah. In his will he gave daughter Mary ten pounds, daughters Abigail, Elizabeth and Deborah got five.  Christopher was to receive the bulk of the estate with Margery as the executor and administrator of said estate.  On 10 October 1650 Margery petitioned the court on the matter of her late husbands will.  This petition was heard by the General Court in Boston in December. This court found that there was not enough value in the estate to pay the legacies left so they adjusted what each daughter was to receive   Mary's share was reduced to 8 pounds and her half sisters were to receive 4 pounds each.

Christopher also stipulated in his will that his daughter Mary should not marry without the advice of her stepmother. Mary married only a few months after the death of her father. I don't know if her stepmother approved or not.[11]

Sourced
Charles Robert Anderson, The Great Migration Immigrants to New England 1634-1635
The Ancient Records of the town of Ipswich

I am a direct desendant of christopher osgood. a grand daughter 15 times or so removed. we are serching for more info on his family line and were wondering if you have come across more. please let me know thank you my email is g2hl02@aol.com, heather .... my mothers maiden name is osgood.