John Colver presented for carrying a burden on the Lord's day, he was out of the country and could not answer for his crime. 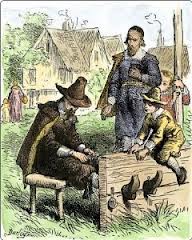 William Flynt was presented for not living with his wife. His answer: his mother was not willing to lett his wyfe  come (sure blame it on your mother)

Michael Millner of Lynn presented upon a common fame  for idly and non profitably spending his time. He was not present he had "gone to Long Island" (I'd go to Long Island too, is I couldn't sit down for a few minutes without being dragged into court)

My favorite:
Roger Scott of Lynn presented for common sleeping at public exercise on the Lord's Day and for striking he who waked him.