Well, here he is, the first (possible) ancestor  who I  do not want to claim.  I think we all want our ancestors to be interesting men and women, leaders, upstanding citizens, prosperous, wealthy even, not to mention descended from royalty.  (Update: It has been proven that William Sanderson, my ancestor, was a nephew of Robert Sanderson of Boston and therefore the nephew of Edward Sanderson of Watertown. 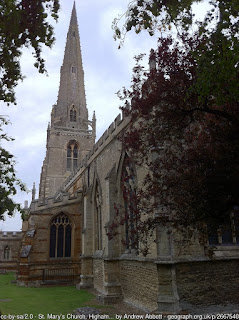 The English birthplace of Edward Sanderson is unknown. Robert Sanderson, believed to be his brother, said in his apprenticeship agreement, to be from Higham.  Although there is a birth recorded in Higham Ferrers for a child named Edward Saundersonne on 5 May 1611  [1] there is nothing that would prove that this is the same Edward who immigrated to Massachusetts. However, a close study of nearby towns shows quite a few Saundesons who trained as Goldsmiths in London, just as his brother Robert. Note: He is not the son of Edward Saunderson of Sheffield. [2] If definitely think that a circumstantial case can be built for the Sanderson's to have come from the area around Higham Ferrers in Northamptonshire. ﻿

Arrival
How and when Edward arrived in Massachusetts is unknown.  He did not sail on the "Increase" in 1635. He is also not the Edward who arrived in Virginia in 1635.  He was probably not the Edward Sanders who worked for Capt. Francis Champernowne as a land agent in New Hampshire.  That Edward was taken to court 21 October 1645 by Mrs. Sarah Lynne, a widow, whom he claimed to have married.  Our Edward was married 15 Oct. 1645 so that doesn't make sense. Still, given his later bad behavior it could have been him.

Marriage
Edward's marriage to Mary Egelleston in October 1645 [3] seems to have been the high point of his life. His wife is said by many to have been the daughter of Bigod Eggleston of Windsor, Connecticut.  Robert Charles Anderson, in his Great Migration bio of Bigod, stated that he does not believe that she was.  He gave several reasons including the fact that neither she nor her children were named in Bigod's will, all his other living children were in the will. Bigod did not have any connections with Watertown in 1645, he left the Massachusetts Bay Colony in 1635 for Connecticut.

The reusing of a deceased child's name was very common at that time. Bigod and his first wife had three children, the oldest child James died very young. Bigod named his next son James. They also had a child named Mary, born in 1613/14.  His first wife died, and he remarried by 1634. In  1636 his new wife gave birth to a girl whom they named Mary. Does Bigot then have two daughters named Mary or is it much more likely that the elder Mary had died and like his son James, he reused the name. This is what I believe happened. Mary Egellston who married Edward Sanderson was not the daughter of Bigod.

hard times
Edward and Mary's first child, Jonathan, was born about one year after their marriage in 1646. By 1660 his rapidly growing family, they had six children by then,  was becoming a burden not only for him but for the town itself.  His family was one of four identified by the selectmen of Watertown as providing an inadequate education for their children. In a town meeting of 28 January 1664 the town gave Edward money to support his family. Later that year in May 1664 the town voted to give Edward three bushels of Indian corn.  In 1671 the town was becoming increasingly worried about the prospect of supporting  Edward's family, they decide that some of the children must enter apprenticeships to relieve the burden on the family and ensure that the child was educated. One unnamed daughter was placed with another family at the age of eight, to serve as an apprentice until age 18. The town paid for the care of Edward's children at least through 1676. Jonathan Sanderson, Edward and Mary's oldest child, worked as a servant for Justinian Holden of Cambridge for 4 or 5 years, beginning at age 17.

It has been suggested by some researchers that Robert Sanderson gave Edward land as a wedding present.  I personally find this hard to believe.  This was a time when men held dearly to their land, not even deeding it to their grown sons, most men were only separated from their land by the grave. Robert Sanderson had more than a few sons to provide for and at the time he left Watertown he was yet to become the wealthy goldsmith he would be in time.

Okay, so the guy was a really bad provider for his family, but he was also something much much worse: a rapist and child abuser. On 8 June 1654 Edward raped an 8 year old girl, Ruth Parson. He admitted having sex with Ruth, but claimed she consented to it. He was convicted but he escaped hanging on a technicality in the law.  His punishment was to be whipped, 30 lashes in Boston and more again in Watertown.  He was to wear a rope around his neck which hung down at least two feet and he was not to be more than 40 rods from his house without the noose on he would be whipped again. His crime, punishment, the rope, a constant reminder that he could be hanged and the response of the town to him may explain why he was not able to provide for his family.

etc. rip
Edward owned land in Watertown some of which he sold to William Shattuck, this was prior to 1664 when title to some of the land came into question and was settled by the Selectmen of the town. Because there was no deed of sale for the to Edward, I believe he was given the land in one of the land divisions.  He also given land in western Watertown that was would later make up part of Waltham. This land was part of the "Great Division", which was divided into four squadrons and divided between the original proprietors. In 1687 a Goody Sanders was ordered by the selectmen to spin yard in exchange for corn, this was most likely Mary Sanderson.

There is no record of death for either Mary or Edward. However, Edward was named in his brother Robert's will. He left him money to buy a cow.


Children of Edward and Mary

Jonathan b. 1646 m. Abia Bartlett in 1669, became a Deacon in the church and an upstanding member of society.
Abigail b. about 1660 m. Oct 27, 1687 Shubael Child in Watertown she died 8 Oct 1693, her husband shortly thereafter became mentally ill, was locked in an unheated jail in the middle of winter and froze to death.
Hannah b. about 1670 m. Aug 6, 1695 Richard Norcross in Watertown
Hester baptized in Watertown in 1686, described as a "young person"
Unknown

Sources:
[1] Northamptonshire, England, Church of England Baptisms, Marriages and Burials, 1532-1812 (this is very difficult to read but it has been confirmed that the name is Edward Saundersonne.

[2]Hunter, J. (1875). Hallamshire: The history and topography of the parish of Sheffield in the county of York. With historical and descriptive notices of the parishes of Ecclesfield, Hansworth, Treeton, and Whiston, and of the chapelry of Bradfield. A new ed., London: Virtue and Co.; [etc., etc.].

[3] Watertown records: comprising the first and second books of town proceedings with the lands grants and possessions, also the proprietors' book and the first book and supplement of births and deaths and marriages Historical Society of Watertown (Mass.). Watertown, MA, USA: Fred G. Baker, 1894. (The marriage is recorded as happening during the 8th month, this is not August, it is October as the Puritan calendar began in March.)