Jonathan Blanchard was born in 1750 in Hollis, New Hampshire. His parents were Benjamin Blanchard Jr. and Keziah Hastings.  Amazingly he was a fourth generation American.  His 3 x great grandfather, Thomas Blanchard, brought his family to the Massachusetts Bay Colony in 1639. Keziah's ancestor Thomas Hastings arrive in 1634.  By the time of his birth Jonathan's father, Benjamin Blanchard Jr., had moved the family from Massachusetts up into New Hampshire, eventually settling in Canterbury.  Jonathan was the son of his father's second wife Keziah, one of about 16 children. After Keziah's death, Benjamin Jr. married for a third time, giving Jonathan siblings almost 30 years younger than himself.

Jonathan married Hannah Chadwick of nearby Boscawen on October 13, 1722 and established his own home.  His name appeared in the 1774 Canterbury Tax Rolls.  (this is the earliest rolls I can find) His name remained on the rolls until at least 1808, the last that I can find. In the town records, which also begin in 1774, his name frequently appears as  he served as the town hog reeve multiple times, as well as other offices. The hog reeve was responsible for the prevention of damage done by pigs.

Many of Jonathan's brothers served as soldiers in the American Revolution, he however did not.  Possibly because he was married and had children and they, the brothers, were still single, who knows. There were, at the time, three or four other men in New Hampshire named Jonathan Blanchard who did serve during the war and their service is sometimes attributed to  our Jonathan. He was also not part of the Green Mountain Boys, I have seen this written about him as well.
After the war, land was opening up in the neighboring state of Vermont and most of his siblings ended up making the move. After 1786 only Jonathan, his brother Benjamin III and their father remained in Canterbury.  Jonathan's father operated a ferry that crossed the Merrimack River and it is possibly that Jonathan continued to run the ferry after the death of his father and brother.  The ferry was replaced by a bridge in 1804. 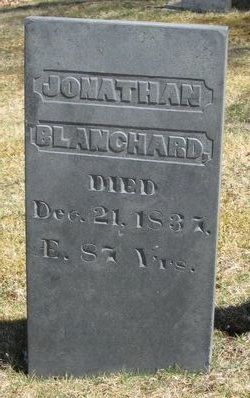 rip
Jonathan died in Greensboro, Vermont.  It is not known when or where Hannah died. There is no headstone for her in Greensboro, so my guess is she died in Canterbury. In his obit it is said that he was of Canterbury, NH which leads me to believe that he did not live in Greensboro for a great length of time.


"History of the Town of Hollis, New Hampshire from its first settlement until the year 1789", A. Williams and Company, Boston, 1889

Town Records of West Dunstable and Hollis, available on Familysearch.com