William Winthrop should have had a great life.  Oldest son of a very successful businessman he stood to share in his father's business and join him as a leading man in the city of London. A little thing called the Protestant Reformation got in his way.

beginnings
William was born in the St. Peter's Cornhill parish of London, right in the heart of the old city.  His father was a highly successful cloth merchant who exported his product to the continent. William was born on 12 November 1529, second child of Adam and Alice Winthrop.  He was the only one of Alice's children that survived childhood and in 1533 at the age of four his mother too was dead.  His father remarried in 1534 but he and his new wife Agnes did not have a child until 1539, making him very much the older brother. In fact, he did not have a brother until 1547, but he would have great influence on his young brother Adam and his nephew John Winthrop, future Governor of the Massachusetts Bay Colony.

William was probably educated at the local parish grammar school. Grammar schools were originally run by the Catholic Church, during King Edward's reign, he established 35 secular grammar schools. William would have been taught to read and write in Latin and some maths.  After grammar school he was probably apprenticed to another Cloth Worker until 1544 when he joined his father in the business. He lived in the same parish as his father, St.Peter's Cornhill.

return of the catholic church
With the death of the protestant King Edward VI  in 1553, his sister Queen Mary forcibly returned the country to the catholic church.  William's father, who had actively promoted the changes brought by the reformation, retreated to his rural manor in Groton, Suffolk. Adam Winthrop left his son William to run the family business.

The return of the church also meant the removal of protestant ministers from the pulpit and in St. Peter's Cornhill the influential minister John Pulleyne.  In order to avoid attendance at a catholic mass or to be reported for non attendance William moved to the next parish of St. Michael's Cornhill but failed to notify his new parish priest of his presence.  He began attending underground protestant services. It is said that William aided the underground movement by allowing worship on his ships while they were in  port and for using them to import books and other printed materials used by the reformers. William also supplied financial support for imprisoned protestants. 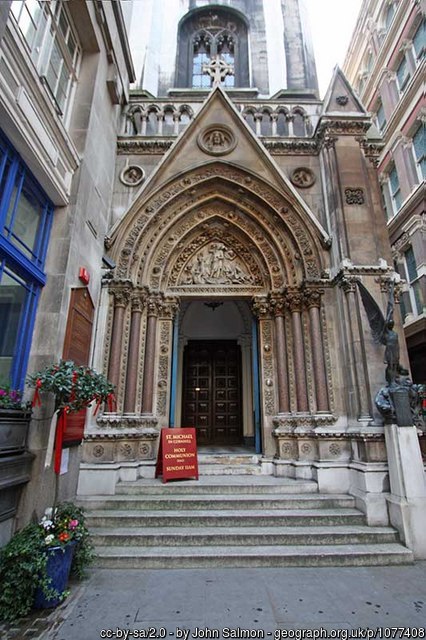 1558 brought a sudden end to the restoration of the catholic church with the death of Queen Mary.  Her sister Elizabeth was on the throne and protestants were once again in control of the state religion.

the return of the protestant church
One would think that with the return of the protestant church,  William would pick up where he and his father left off with the family business. But William was not satisfied with the extent of the reforms and continued to labor for complete eradication of all things "catholic" from the church. He served as churchwarden at St. Michael's and supported the "stranger" churches of foreign nationals living in London. William spent his own money putting reform minister in churches, not only in London, but in his father's church in Groton.

a penniless end
William spent perhaps too much time and money in his support for reform or too little time tending to the family business.  By 1577 William was broke.  In order to pay for the apprenticeship for his sons Joshua and Adam, William had to sell the family home.  He sent his wife to live with her family in Kent.  William applied for and was granted one of the parish poor houses, where he died in 1582.

his family
William married Elizabeth Norwood by 1558, their son Joshua was born and baptized in July of 1559 in the now protestant church of St. Michael's Cornhill.  They would have six children but only 4 are known to have survived to adulthood. Elizabeth is known to have been from the county of Kent but her family has not been identified. Her parents are not Raffe Norwood and Jane Knight of Gloucestershire. Elizabeth died in 1578, shortly after leaving London for Kent.  No mention is made in any record of what became of William's daughters Sarah and Elizabeth until they married.  I would guess that maybe after the death of their mother they may have lived with their Uncle Adam or at least kept in close contact as they both married men from Suffolk.

My ancestor was William's daughter Elizabeth who married Humphrey Munning, a reformed protestant minister. Their daughter and her husband would follow the Winthrop family to the Massachusetts.  Speaking as a person of the Catholic faith, I have to say it is a bit awkward and uncomfortable to write about the Church as if it was something evil but that was the sentiment of many of my ancestors.  Conversely I find their brand of faith to be offensive, so William I guess we are equal.

Sources:
My main source for this bio is the wonderful biography of John Winthrop by Francis J. Bremer, which I highly recommend.  He also has written articles about William Winthrop and his efforts towards the reformation of the English Church.