John Clark Thornton was my great grandfather. He was the last born child of Samuel and Chloe Blanchard Thornton of Wheelock, Vermont. John was born on 23 June 1859. His father was a farmer, born in Canada, who spent most of his life in Vermont. Samuel's parents were American, but took advantage of land opening up in Canada in about 1800. They eventually moved south into Vermont. In 1860, according to the census, the family lived in Wheelock, but by 1870 they had moved some 18 miles to the west and settled in the little town of Hardwick. Samuel's farm was on the Caledonia Greensboro County line, with some land in each county. Samuel had maple trees which he tapped for syrup.

tough times
John's father died at the age of 58 in 1874, his mother Chloe died two years later. He was only 15 when his father died and orphaned at 17. In 1875 the Thornton children were forced to sell the farm to cover Samuel's debts. But, I think, John was a smart determined young man and in the 1880 census he was the head of the household. Living with him were his sister Maria Niles and her son Olin and their brother Benjamin Franklin Thornton. Maria had married Van Doran Niles in 1876, she lost a baby in January of 1880, I don't know why she was living with her brother John, but Van Doran did have an affair later in their marriage, so maybe things were not so good between them. But that is just speculation on my part. Their brother Nathan died of tuberculosis in 1878, the rest of the siblings were married and lived on their own.

first marriage
On New Years Eve in 1885 John married Laura "Nettie" Hazen. He was 26 and she was 19. I'm sure he had every expectation that they would live a long happy life together, but it was not to be. Less than a year later she was dead of Typhoid fever. I can only imagine what a blow this was to him.

greener pastures
In 1889 John C. pops up in Boston, MA of all places. I found him in a Boston City Directory. He lived at 146 Seaver St. His occupation was listed as Butter Dealer. So, how does a sugar maple farmer from Vermont end up a butter dealer in Boston? Did the loss of his wife cause him to leave? I don't know, but I do know that he lived at the same address as his first cousin Dudley Clark Thornton.

Dudley was the son of David Thornton and Lydia Clark, hence the middle name Clark for both John and Dudley. Dudley had an older brother also called John Clark Thornton who died in 1873. David Thornton left Vermont in 1860 after the death of four of his children from Scarlet Fever. He and Lydia settled on her family farm in Campton, NH. Dudley married in 1865 and had three children before he left New Hampshire and his family for Boston. In 1877 he remarried and began a new life. Dudley had another brother Jared D. Thornton who had also left New Hampshire for Massachusetts. He was a dairy farmer. Did these two brothers help their cousin find a new career as a butter dealer? 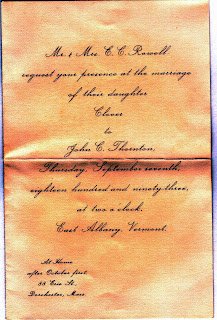 By 1893 the cousins, John and Dudley, had moved to 88 Erie St. in Dorchester. John Clark would make another life change in 1893. In September of that year he remarried; his bride was Miss Jennie Clover Rowell of Albany, Orleans, Vermont. She was the 26 year old daughter of Enoch Converse Rowell and Viola Rowell. So how did these two meet? I have no idea! I do know that she was an accomplished pianist. Dudley and his wife moved to nearby McLellan St. the next year. John C. and Jennie Clover lived on Erie St. for many years.  In 1899, my grandfather, Paul Rowell Thornton was born, and so began J.C. Thornton Co. 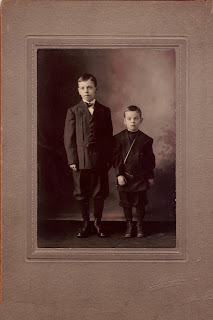 Jennie had only two children, one after six years of marriage, the second born five years later. Wayne who was born in 1904, was a cute little boy. He died when he was six years old of post diphtheria syndrome. It is tragic to read about all these people who died of communicable diseases that are so easy to prevent and/or cure with today's medicine. I get really mad when I hear about parent's not vaccinating their children I wonder if they have idea what could happen to them. But, that's a soapbox for another platform.

a family business
John Clark Thornton's business was a success. He delivered butter and eggs in a horse drawn wagon.  Eventually he would buy motorized trucks. His sister-in-law, Mary Viola Rowell, moved in with them and help run the business. My dad said that he could remember her checking eggs under a light to see if they were fertilized. My grandfather Paul worked for the company as well. He met my grandmother, who worked as a house maid, when he was making deliveries to the house where she worked.

death
John Clark died of a sudden heart attack on the morning of July 18, 1925. He was 66 years old. Jennie lived until 1966, she was eight months shy of her 100th birthday.  My grandfather continued to run J. C. Thornton Co. until the advent of the grocery store with refrigerated cases for dairy products, put all such delivery services out of business. They are buried in the Forest Hills Cemetery with Wayne and Mary Rowell. 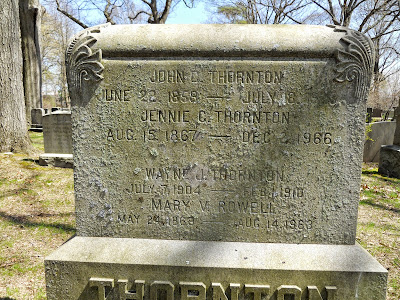