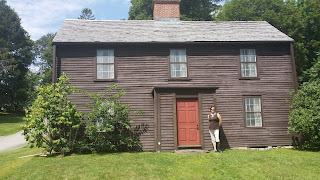 I am going to New Hampshire/Massachusetts this summer and one of the things I want to do is see the Macy-Colby House. This house was built by Thomas Macy in 1649 in Amesbury, MA. He sold it to Anthony Colby, my ancestor in about 1654. The house remained in the Colby family for over 245 years.  I can't really tell from the pictures on the website, but the house looks like a two up/two down with a lean to on the back. It is, by most standards, a pretty primitive house. However, according to the website, it was extensively renovated in 1740 by Obadiah Colby. If this is what the house looks like after renovations, what I wonder was the original house like?

The Macy-Colby house and others like it are called first period houses. They were built between the arrival of the first colonist in 1626 until 1725.  The first arrivals lived in tents until more permanent structures could be built. Some built Indian style wigwams as a form of temporary shelter. For many their first home in New England was a single room with a dirt floor and papered windows. When these people arrived, time was of the essence. They needed shelter and they needed to break ground and plant crops to feed themselves. As soon as adequate shelter was in place, time and effort went into cultivation and procurement of food. There was little or no time for building more elaborate housing. Sure, there were men like Thomas Dudley, who was wealthy and able to put resources into building his home, in fact, he was ridiculed by John Winthrop for his wainscoting he had made for his house. But, the vast majority of the new arrivals did not have the luxury of hiring craftsmen and builders to create their ideal home.

English immigrants built houses that resembled those that they had left behind. Many of the First Period houses of New England had their roots in the medieval homes and cottages of East Anglia in England. These houses had steeply pitched roofs and exposed beams inside. They had a central fireplace, at first made of wood, covered with a mud plaster, making them extremely susceptible to fires. Add that to a thatch roof and you have a recipe for disaster. Later fireplaces were made of brick. The newly built homes more often than not were either single story with a loft or two story.  When you added on a lean to you got the typical New England Saltbox house.

Most of these early houses were of a type known as Hall and Parlor. The front door opened directly into the main living space. The building had two rooms, one large one smaller, with either a fireplace in between or on each end. The house may have started out as single room that was added to when time and money were available. The hall was used as a great room. This was were the women spun and sewed, where the family ate, conducted business, and where they slept. The smaller room, the parlor, was was used for more private conversations and transactions.  a lean to might be added to the length of the house or included in the original house and incorporated into the roof line. This room was used for storage, as a service room or kitchen, even as a sleeping quarters. If there was a second story, the staircase would be built next to the central chimney.

Second floor rooms, usually called chambers,  were not necessarily used as bedroom, often they were used as a storage room for valuables and for grain. Another storage option was the cellar.  This was not a cellar in the sense that we know now, but more of a underground accessible space for the storage of root vegetables and other consumables that require "refrigeration". 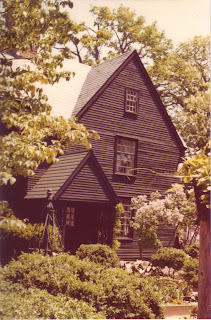 When time, money and status allowed, the New England houses began to alter from this original Hall and Parlor design. Additional wings might be added to one or both ends of the house. One important characteristic was the jettied upper story. In this style house the second story hung over the first. Glass diamond pane windows were added until the arrival in about 1700 of the double hung sash window. The salt box might get a new look with a gabled roof which added architectural interest to the house.  Another welcome addition was the central hallway, this usually included the addition of a new style entryway that did not open directly onto a room, but allowed one to enter the house without letting in the elements as well. The biggest change from English to New England house was the incorporation of the kitchen into the house itself as opposed to a separate entity.

A unique feature, available to the very wealthy, was an architectural feature known as gables.  Instead of a single roof, each element of the house had its own smaller "gabled" roof. The Turner-Ingersoll Mansion in Salem is a great example of this style. The house is best known by the name The House of Seven Gables.