Samuel Thornton of Abbeville, South Carolina; Who Was He? Was he the brother of Matthew Thornton of Londonderry, NH?

If the Thornton Project at FamilyTreeDNA is an accurate  reflection of the Thornton men who immigrated to North America then there are two large groups of  related descendants. The largest by far are the Virginia descendants of William and Luke Thornton. The next largest group seems to be the Thorntons of Rhode Island. Many of the other Thorntons have no match; my father's YDNA has one match.

My father was a descendant of the Thorntons who immigrated from the North of Ireland to New England in about 1720. They first established themselves in Maine, but were forced out by the Native Americans. They moved on to Worcester, Mass before settling in New Hampshire. His ancestors were James Thornton and his son William who died in Thornton, NH in 1790. The YDNA match was from a man who descended from Samuel Thornton who died in 1797 in Abbeville, South Carolina. So who was Samuel Thornton of Abbeville?

the simonton family of conestoga manor
Theophilus Simonton, believed to have immigrated from Ireland, purchased land in what was called the Conestoga Manor in Lancaster County, PA. Sometime around 1754 brothers William and Robert Simonton, sons of Theophilus, bought land in what was then Anson County, North Carolina. [1] Samuel Thornton purchased his land grant on 7 May 1757. He was married to Theophilus' daughter Mary Simonton. There is no record of their marriage so we cannot be sure where this marriage took place, in Pennsylvania or in North Carolina. 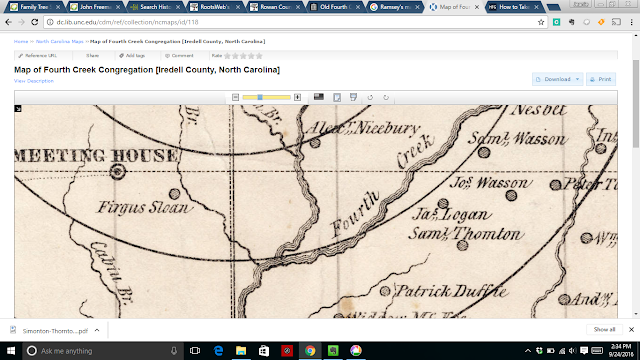 The map above shows the location of the Samuel Thornton land. It's interesting to note that his closest neighbors were Wassons. The Thornton family of Londonderry had close family ties with a Wasson family as well. 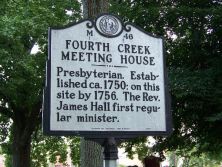 Some folks claim that Samuel was the brother of Matthew Thornton who signed the Declaration of Independence. Another thought is that he was the son of Robert Thornton of West Bradford, Chester, PA. Robert did have a son named Samuel. He also had a daughter Hannah Thornton Freeman who is said have immigrated with her husband John to Cane Creek, North Carolina. Thornton/Freeman families were Quakers and they belonged to the first Quaker church in North Carolina. I do not think that Samuel of Abbeville is the Samuel son of Robert in this family for two reasons. First Samuel Thornton of Abbeville was a Presbyterian and was one of the founders of the Forth Creek Church in Anson/Rowan/Irdell County North Carolina. The other problem is that Samuel Thornton was still on the tax rolls for West Bradford, Chester, PA in 1789.

was samuel the brother of matthew?
If Samuel was the brother of both Matthew Thornton and my ancestor William Thornton, then the common ancestor between my father and the matching YDNA kit would have to be their father James Thornton. James would be my father's fourth great grandfather. Below is the chart showing the probability of our common ancestor.

I am only a novice when it comes to deciphering DNA results, but to me it seems that our common ancestor is more likely further up the chain. What we need is more Thornton descendants to take a DNA test to solidify the results. With only two tests it's simply not possible to tell. So, that being said, Hey all you Thornton males, get tested!