From Asheville, North Carolina to a Resale Shop in Texas: The travels of a 1955 High School Class Ring 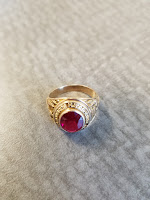 In a dusty box of costume jewelry sat a lovely gold class ring with a large red stone. It was in immaculate condition. Someone looked at that ring and saw a worthless object, the shop employee saw a profit, but I saw a detective story. I slipped the ring on my finger, it fit perfectly, it was a woman's ring. I knew I had to find the owner and her story.

The ring was from 1955, the school  Lee Edwards High School in Asheville, North Carolina. I've never been to Asheville, but I hear it's beautiful. Anyway, inside the ring were the owner's initials F. C. M. Thanks to classmates.com I was able to find the 1955 Yearbook for Lee Edwards High, The Hillbilly. There she was, a pretty short haired blond, with a sweet smile; Frances Martin. Frances was in the Glee Club, the Latin Club, the French Club, and other activities.

According to records found on Ancestrydotcom Frances Calvine Martin was born on 23 December 1936 to Robert James Martin and Elizabeth Howerton Babbitt in North Carolina.

Shortly after graduation, eighteen year old Frances Calvine Martin married twenty-one year old Clyde Gilbert Tweed, also of Asheville, NC.  Clyde would become a doctor, graduating from Duke University in North Carolina and the couple lived in Florida. The marriage did not last; they were divorced in March of 1961 in Bradford, FL. Dr. Tweed would marry twice more, serve his country in the Navy, and die after a long life in Florida in the year 2012. The couple had at least two children, both sons, Jonathan and Robert. 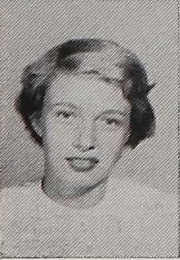 On the 22nd of September in 1961, Frances Martin Tweed remarried. Her second husband was Richard Phillip Caputo in Buncombe County, NC. Less than a year later, Richard Phillip Caputo Jr. was born, 29 August 1962, in Asheville. I found nothing further on the child. I believe that Richard, her husband died in 1997 and is buried in Alexandria, Virginia, but I'm not 100% sure.

On the 26th of July 1975, thirty-eight year old Frances Martin Caputo, twice divorced, married for the third time to Frank Ambrose Finnerty Jr. in Fairfax County, VA.  He was fifty-one and also divorced. According to their marriage record, she had at least two years of college and he five plus. Frank was a physician, who taught at Georgetown University. He died in 2011 at the age of 87. But, according to his obituary, he and Frances had divorced prior to his death. They had at least one son, Richard.

Frances died on 27 February 2012 at her home in Brevard, North Carolina. She was survived by her husband  Christopher John Nuthall. She was retired from her job in hospital administration and was according to her obituary an accomplished artist. Chris Nuthall died in March of 2017, also in Brevard, NC.

In all my searching, and it took a lot to track this lady through her interesting life, I could find no connection to Texas. The question remains, how did her 1955 class ring end up in a resale shop thousands of miles from where she was born, lived and died?  It's a mystery to me.

addendum: I contacted a family member and left a message. Probably thinks I'm a weirdo and did not return my call.

I knew Francis my entire life she was an amazing woman always so posed and brilliant. Her nickname was Feather she had a especially close relationship to my Grandmother and Grandfather she was like family.

If you ever come across her family, I'd love to return her ring if any of them are interested.