It's hot here this bright May morning; yesterday our high was 95° and steamy. Today looks to be the same. My oven grows cobwebs from May to September, no cookies are baked, no homemade bread. We grill a lot in the summer, if it can be flipped, skewered, or tossed in a grill pan, it's on the menu. Some folks around here have fancy (expensive) outdoor kitchens with built in sinks and fridges which make the process a little more pleasant, but a simple grill will suffice.

The other day I was researching life in upstate New York at the time of the American Revolution and I came across a reference to a building called a 'summer kitchen.' I knew that these types of kitchens, removed from the main residence, existed in the south but not as far north as New York. My interest was piqued. So what was a summer kitchen and what did it look like.

Summer kitchens were popular in the north from the 18th through the 19th century. They were usually a single room, 150-250 square feet, building that was distinct from the house. This not only kept the main building cooler but lessened the risk of fire. Often these summer kitchens were built of rock or brick, which had the benefit of making them less flammable.

In the early versions of the summer kitchen, the fireplace and chimney usually took up an entire end wall and might also have a baking oven built into it. Unlike today's kitchens there was no built in furniture, everything was movable. If the owner could not afford two sets of cooking implements and all the accouterments that were needed for cooking then they needed to be transported back and forth.

In 1795 the cast iron stove was introduced to America. Bulky in size, it took up a significant amount of space in the home. These were often put in the Summer Kitchen to free up square footage. The stoves  also gave off significant heat, another reason to relegate them to their own building during the summer months. See this link for a great photo. 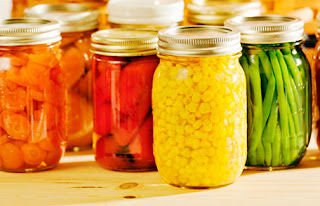 The building was used for more than just production of the days meals. In the north where, abundant summer fruits and vegetables were grown, there was a need for space to pickle, can, and dry the produce. The housewife or her servants made jams, jellies and fruit butters. Herbs could be hung from rafters to dry. The kitchen could also be used for the processing of meat, drying, salting, and smoking of hams and bacon and the production of meat products such as sausage.

A loft  might cover a portion of the ceiling and used for storage or for sleeping quarters. With doors thrown open, the family might eat their meals at a table set up in the kitchen, if the breeze was right. In the south the separate kitchen was the domain of slaves, they lived, worked and slept in the kitchen.

Wherever it was, the summer kitchen was the domain of women. The task of food processing fell to them. I can just picture my ancestor, swathed from head to toe in material, no fans, no A/C, nothing but a breeze to stir the air, standing before a hot fire, spoon in hand, stirring a pot of raspberry jam. I am thankful it's not me.