I am working on some research on my father's side, one of his ancestors was a Miss Chloe Blanchard.  I have followed her back to Thomas Blanchard of Charlestown, Massachusetts.  In a search for his origins I came across this story on a rootsweb page owned by Larry Overmier:


"In the year 1610 things became too hot in Normandy for the Huguenots in their age-long struggle to put a Protestant King on the French throne; thus, it came to pass that the head of the Clan Pirre Jean (Peter John) Blanchard, loaded his family into his boat, The Johnthan," and sailed the English Channell, the North Sea and up the Humber River to Hull, in Yorkshire, England. His colony settled in Halifax, Leads and Bradford. Each was trained extensively in arts, crafts and the sciences. They were the very first "Teachocrats" in England; they revoluionized English industry and to a lesser degree English life. Peter John Blanchard settled in Halifax with his sons, Thomas, John, Peter, Joseph. In 1637 son Thomas's wife died and he moved his family to London Town. Later he left London with four sons, landing in Boston in 1639. Joseph and family also sailed to Boston; Peter and John remained in Yorkshire." --Edward John Blackman Sr.

WOW!  This is just too good to pass up, horrid spelling aside.  Huguenots! TEACHOCRATS! (what the heck is a teachocrat!!!)  These people REVOLUTIONIZED (at least I spelled it right) English Life and are responsible for the Industrial Revolution.   What a family. Oh sorry, apparently they are a CLAN!

What do you think? Is this for real?  This story sounds like a candidate for my biggest Whoppers Page, but you  never know, it might have some truth to it. The eternal skeptic in me is screaming or maybe its laughing, who can tell, I am too giddy from ALL MY CAPS.  If you know something about this and can help me out please, please post a comment, one caveat, only documented sources allowed! Meanwhile I will start running this Pierre Jean to ground and see what does or does not come up. 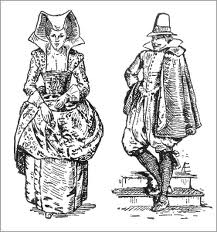 Three weeks later......
So I haven't found much, other than the same old story over and over, with not a single piece of documentation.  I did find this on an old (c. 2000) message board, which pretty much sums up Pierre Jean:

Numerous BLANCHARD researchers have promoted the idea that Pierre Jean BLANCHARD, a French Huguenot from Cap de la Hague, Normandy, France (or possibly one of several other locations in France), brought his family to England in the mid- to late- 1500s and among his children were Thomas (c1585-1654) and Joseph, (   -1637), both of whom would later emigrate to America.

We might conclude that enough of these "stories" have circulated to lead us to believe that they were independently derived and that there must be some truth to them. It is also possible that all of these accounts are based on a single proposal that seemed plausible at the time and fit the model of a French-sounding name and the intriguing image of a group of craftsmen/artisans fleeing from religious intolerance in their native land, to the welcoming shores of nearby England.
At the time of this writing (Dec. 2000), no documented sources that can substantiate the existence and the progeny of Pierre Jean BLANCHARD, are known to the members of BLANCHARD-L.

I think it is safe to say that Pierre Jean was a nice piece of historical fiction, but that is all he is.
If you think you know better, please let me know, and as always show your proof in the form of documentation!
Happy Researching.
- October 02, 2012

Email ThisBlogThis!Share to TwitterShare to FacebookShare to Pinterest
Labels: Myths