When I lived in England in the 1990's there was a TV series on called "Lovejoy" starring Ian McShane, it was a pretty good show, and I always loved that name, Lovejoy.  Well, I am happy to find that I have my own Lovejoys in my family tree and an added bonus is that they are well researched.  If you are just beginning your Lovejoy research my first advice to you if you are looking for information on The Lovejoy Family in England is to stay off ancestry.com and ignore most internet genealogies as there is a lot of incorrect information out there. (Don't get me wrong, I love ancestry.com and use it everyday, but there are some mighty big errors to be found on some of the family trees.)

In 2009 the NEHGS Register published an article by James R. Henderson entitled "The English Origins of John Lovejoy of Andover, Massachusetts" which can be read in its entirety  on the Society website, americanancestors.com. If you do not have a subscription to the site, never fear, I am going to give you a breakdown of his article. So for now forget everything you think you know about John Lovejoy, especially if you think his father was Rowland Lovejoy of London.

In 1930 Major Clarence Earle Lovejoy published his seminal work on the Lovejoy family. In his search for a John Lovejoy born in England in the year 1622 he found a record for John, son of Rowland Lovejoy of London.  This John fit the right birth date for John Lovejoy of Andover who, based on his swore testimony, was born in 1622. The only problem, which he openly admits to in his book, is that he has absolutely no proof that he is the John Lovejoy who came to America. Despite Major Lovejoy's acknowledgement of the total absence of evidence, genealogy buffs everywhere have declared it to be true and in the age of the internet this has been copied over and over and over.

Thankfully Mr. Henderson's research in England was thorough and he had definitive proof. In 1638, sailing aboard "The Confidence" to the Massachusetts Bay Colony was the family of John Stephens and his two servants: John and Grace Lowgie of Caversham, Oxfordshire, England.  As early as 1965 the passenger John Lowgie was identified as John Lovejoy of Andover but no real research was done his ancestry until Mr. Henderson undertook his search. And, as Henderson points out, no one questioned why John Lovejoy, son of Rowland Lovejoy, Goldsmith of London, would be the servant of a farmer in Oxfordshire.

Found in the parish records is our John Lovejoy, son of William Lovejoy, he was baptized in Caversham, Oxfordshire, Eng. on 14 July 1622.  His sister Grace was two years older than him and was baptized in nearby Sonning on 9 April 1620. Henderson also found several variations of the spelling of the name Lovejoy, including Lowgie, as it was spelled on the ship manifest.

At that time Caversham was in Oxfordshire, it is currently part of Berkshire County, and what was once a small village is now a suburb of nearby Reading. The village was recorded in the Doomday Book and at one time had a shrine to the Virgin Mary and became a place of pilgrimage.  Catherine of Aragon visited it in 1532. Caversham was also the site of an Augustinian Abbey, torn down by Catherine's husband Henry XIII.


coming to america
John Stephens and his family and servants, John and Grace Lovejoy set sail on the Confidence from London, probably on 24 April 1638.  Also on board were other ancestors of mine: Thomas Whittier, Roger Eastman, and William Osgood.  A typical crossing took four to eight weeks. John Stephens first settled in Newbury but by 1645 he was in the new town of Andover.

The first permanent settlement in Andover was in 1641 by men from nearby Ipswich and Newbury. Recorded at an unknown date in the town records was a list of the first settlers, this list includes the names of John Stephens and John Lovejoy. There is no way to tell how long John worked for the Stephens family or when he struck out on his own. We do know that John married Mary Osgood, daughter of Christoper Osgood of Ipswich, on 1 January 1651, he was twenty nine years old. Mary was baptized in St. Mary's Marlborough, on 22 April 1632. 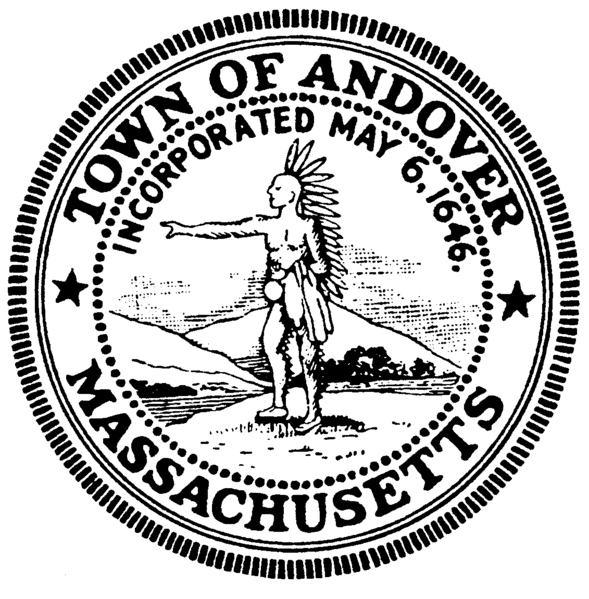 John's name is first found in the 1658 records of the Quarterly Court when the birth of his son William was recorded. Also in that record are the births of Hanna and Lidda Ballard, daughters of William and Grace Ballard. Grace is believed to be Grace Lovejoy. Another 1658 entry is a petition by the men of Andover requesting the Court appoint John Osgood as sergeant and commander in chief in the stead of Sgt. Stevens, his former employer, who wanted to step down. In September of 1662 he served on the Grand Jury at the Court held in Ipswich. At that same court he was called to testify in a case involving  his brother in law William Ballard.  The next mention of the Lovejoy family is in the 1667 recording of the births of Sara and Nathaniel.  In 1669 John and other Andover men gave testimony in a case involving Thomas Chandler.  Later that year the birth of John and Mary's daughter Abigail is recorded.

In 1671 an Andover man named Thomas Johnson was brought before the court and charged with selling two bottles of liquor to Indians. He requested a trial by jury which resulted in some convoluted testimony by other Andover men, including William Ballad, his son Joseph, and John Lovejoy. In the end Johnson was found guilty, but what is interesting about the testimony is that glass bottles are used over and over again, different men testify that they gave the empty bottle to someone or sent them to Ipswich to fill the bottle with liquor, not like today where once it's empty it goes in the trash. John also served his town as fence viewer and as constable.

prosperity
John arrived in Massachusetts as a servant. In Andover he started down the road to prosperity with a house lot and seven acres of land. At the time of his death his estate was over 200 acres, an unheard of amount for a husbandman in England. His estate was valued at 328 pounds when probated. John deeded his son William but the remaining sons had to wait until his death to acquire the land they lived on.

It has been pointed out that John allowed four of his sons to marry at a relatively young age, 22-23. Most men had to wait until closer to 30 for marriage. But, John provided them with land to live and work on, even though it remained his land. John Jr. died at the young age of 24. He left a wife and two small children, infants really. John Sr. gave his grandson, the land that would have been his father's. When John Jr's widow, Naomi remarried, John Sr. kept her children to raise in his home.

scandal
Several years after the death of John Jr., his widow, Naomi was in court. She was self confessing to the offense of fornication. Her partner in crime was 22 year old Benjamin Abbott. The reason she was confessing was, of course, she was unmarried and pregnant. She gave birth to girl, who she named BenNaomi Abbott. Benjamin, surprisingly, did not appear in court, but his family did pay a fine on his behalf. Did John Sr., the children's grandfather consider Naomi to be unfit raise her children?

John outlived three of his children: Sarah, John Jr. and Benjamin. Benjamin was killed in
the fight at Pemaquid, now Bristol Maine.  Pemaquid was the easternmost outpost of the Massachusetts Bay Colony.  This was during the fighting known as King William's War.  Also killed was John Stevens Jr., the son of his former employer.

John Lovejoy outlived his wife Mary Osgood Lovejoy who died in 1675 at the young age of 42. She had been pregnant at least twelve times in the twenty one years of their marriage. There was probably not a day after she gave birth for the first time that she was not pregnant, nursing, or changing diapers. Her first two children were girls, they were most likely tasked to help care for their younger siblings while still young girls.

After her death John remarried in 1676 to Hannah Pritchard. Her husband William Pritchard was killed by Indians in 1675. John Lovejoy lived a further 15 years, he made his mark on his will on 1 Sept. 1690, his will was proved on 31 March 1691. John made provisions in his will for Hannah, writing that he wanted "her life to be comfortable while continuing in this world."  He bequeathed to her in her lifetime half of his dwelling house and half the solar, of which she could choose which half. He made provisions for her food, asking that she be given cider, wheat, rye, cows, etc. for the rest of her life.

Also in his will he mentioned his son William, saying he had already gotten his portion, which was the land on which he lived. To Christopher he left 30 acres of land, adjoining that of his grandson John, a parcel of meadow and 1/6 of a meadow called the pond meadow provide he give his step mother pork, hay, and Indian corn. Christopher was also to give money to his sister Sarah Lovejoy Johnson. The will is in pretty bad shape, but it looks like Nathaniel was given the land that would have gone to Benjamin had he lived. Nathaniel was tasked to pay his sister Abigail. Next up was Joseph, he got land, also 1/6 of the pond meadow and he had to pay his sister Anne Blanchard.

Ebeneezer, the youngest son and child was given his father's house, orchard, barn and adjoining land. He was given a piece of meadow near a hill called the Boston Hill. He too had to pay his step mother Hannah, and had to pay his sister Deborah.

In September of 1690 he wrote a codicil to the will. He split all his household goods between Ebeneezer and Deborah. Ebeneezer was also to pay his two single sisters 3 pounds in cattle when they married. He made provisions for his granddaughter Francis Lovejoy, who lived with him. She was to live with Ebeneezer and his wife. Ebeneezer was to make sure she had proper clothing.

John also named "his brother Thomas Osgood", his son William and Joseph to oversee Ebeneezer. He was to make no deals or enter into no bargains without their approval. They were also tasked to look after Francis until she married.

John's will was extremely detailed and he made provisions for all his children and his grandchild Francis. His care and concern for his family is evident in his wording as well as the substance of his last will. 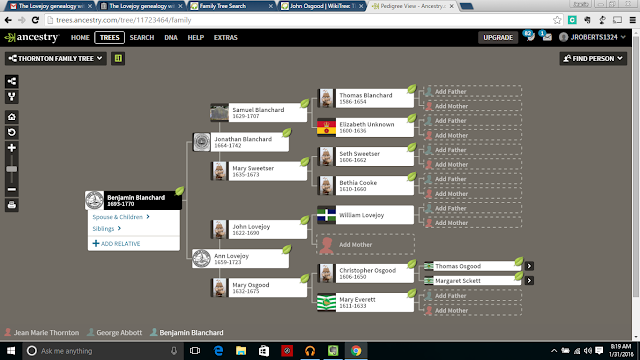