background
Benjamin Blanchard was the son of Jonathan and Anne Lovejoy Blanchard of Andover, MA. He was born on 14 Feb. 1692/3.  I doubt the Puritans would have been celebrating St. Valentine's Day, so this would have been a day  like any other. On Dec 29, 1718 he married Mary Abbott, daughter of Nathaniel and Dorcas Hibbert Abbott, also from Andover. 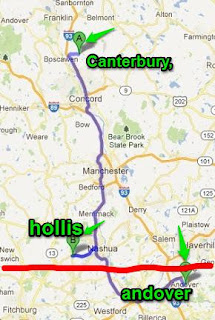 October 1739 a bad year
After their marriage the family steadily grew as did most good puritan families, adding a child every two years or so. Altogether they would have 12 children, all born in Andover.  Their 10th child, Abiel, was born in September 1737. On October 13, 1739 Benjamin and Mary's nine year old daughter Dorcas died, Abiel died two days later on the 15th. The next day eleven year old Jonathan died and finally on the 19th, seven year old David passed away. Four children dead in six days.

The children all died of Scarlatina, a form of Scarlet Fever, which they called a "throat distemper". The disease began ravaging New England families in 1735. It was not uncommon for families to be decimated by the disease. In Andover four families lost a combined 14 children in 72 hours. In an age without antibiotics there was nothing the family could do other than try to comfort the sick children.

Mary was pregnant at the time of the epidemic and gave birth to a son, who they called David, in February of the next year. David died two months later.  It was very common for parents at that time to "recycle" a name, Benjamin and Mary did this twice.  They would have one last child, called Abiel, born in 1741, tragically he would die before his second birthday.

new beginnings
By 1742, at the age of 50, Benjamin left Andover for West Dunstable with what was left of his family. Although West Dunstable was in Massachusetts in 1741, when the border between Massachusetts and New Hampshire was redrawn, the residents found themselves living in New Hampshire. The name Benjamin Blanchard appears in the early town records beginning in 1743. (There was a second Blanchard family living in Hollis at the same time. They are thought to have been descended from the original Thomas Blanchard who immigrated to the Bay Colony.)

The move was a new beginning for his children as well as Benjamin, each married and began their families in Hollis. Benjamin Jr. eventually left Hollis and moved north to Canterbury, NH.  Benjamin Sr. is said to have gone with him and died there around 1770, but there does not seem to be any evidence of this. There is no record for his wife Mary after the birth of her last child.

The first town meeting of Hollis was called in 1746, Benjamin was elected fence viewer. He or his son Benjamin Jr. held various post until they left Hollis for Canterbury.

children of Benjamin and Mary:

Anne b. 1722 m. Jonathan Danforth of Billerica in 1743, sadly he died in 1747 in Hollis
their children lived in Hollis. Jonathan was one of the first to recieve land in Hollis before 1741. He was a surveyor and laid out town boundaries for the new town.

"History of the Town of Hollis, New Hampshire from its first settlement until the year 1789", A. Williams and Company, Boston, 1889