Chasing Samuel Thornton My Elusive Ancestor, Or Is He?

First off I have to admit I have come no closer to finding my elusive ancestor, Samuel Thornton. That said, I am rapidly coming to the conclusion that he is NOT my ancestor. I am sure you are shaking you head saying that I am wrong, because our ancestry is all documented in that great book by Charles Thornton Adams. So let me start with the book. 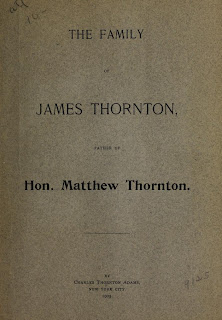 Printed in New York in 1905, the book is entitled "The Family of James Thornton, Father of Hon. Matthew Thornton". The author attempts to trace all the descendants of James Thornton, who with his family immigrated to the Massachusetts Bay Colony in 1720 from Londonderry, Ireland.  Charles Adams seems to have done a great job of rooting out the families of James' children, each having a fairly comprehensive bio of their life and their descendants down to those living in the year the book was published.  This included my great grandfather John Clark Thornton. John it is said is a descendant of Samuel Thornton, brother of Hon. Matthew Thornton, signer of the Declaration of Independence for the state of New Hampshire.  For the history lovers in my family, myself included, this connection to a historical figure is not only fascinating but a point of pride.

samuel #1
I have always been very disappointed in Samuel's bio in the Adams book.  He has only one page to his name, while all the sibling have much more comprehensive bios.  Even the sisters have much more written about them.  So for those unfamiliar with the Adams manuscript, here is what he has to say about Samuel:

I put the words "he is said" in bold to emphasize how little of this bio is based on documented facts.  In truth the only facts in that paragraph are that his son Samuel was born in 1775 and daughter Dorcas was born in 1779. There is nothing to prove or disprove for that matter that Samuel lived either in Campton or Hatley.  There is absolutely no records that I can find that give any hint of who he was or where he lived. And, how does a man have 22 children and yet only two of them are even remotely traceable? Even with a high infant and child mortality rate you would think that at least a third of them would have survived.

samuel #2
The Adams manuscript next addresses Samuel 2, son of Samuel 1, and this is what he says of him:

Samuel 2, when 17 years of age, went to London, England.  He adopted a system of coking which gave him great success among the iron masters near London. He returned to America and settled in Wheelock, Vt.

Let me start by saying that if Catherine Baker was related to Lord Chatham, AKA William Pitt the Prime Minister of England, I cannot find the connection. Her ancestors were almost all in the colonies by the mid 1600's, so I am pretty sure that tidbit is fiction.   I also have a problem with the part about Samuel going to London at age 17, and wooing the Iron Masters of London with his mastery of a coking system.  Why would a farm boy of 17 go to London in 1792, where I'm sure Americans were not too popular.  He then amazes the Iron makers in London and by age 23 returns to New Hampshire and once again becomes a farmer. Nothing in that makes any sense to me.

In 1797 Samuel's name appeared on a tax list for Campton, NH.  He was not a resident of the town but he did own some land there.  In 1799 and 1800 his name was listed as a tax payer in Thornton and a land owner in Campton.    In 1801 he was listed as a land owner and resident of Campton. In 1802 he married Catherine Baker of Campton.  The records for the Thornton tax list jump from 1800 to 1816 so I don't know if he still owned land there.  Also on the tax list for Campton in 1800 was John Durgin who would marry Samuel's sister Dorcas in 1802.  Samuel remained on the Campton tax list until 1806 when his name was gone.  In 1808 his second child, a son named David, was born in Hatley, Quebec, where the family remained for many years.

putting it together
So who does this sound like: lived at Campton and later Hatley,Quebec?  It sounds like the bio for Samuel 1. Samuel 2 was in the 1825 census for Hatley, after that he is next found in the 1840 census for Wheelock, Vermont. He was then 65 years old.  This can hardly be described as "he returned from London and settled in Wheelock".  I think that Adams took the info he had on Samuel 2 and mistakenly applied it to Samuel 1.
So who do I think was the father of Samuel 2. I think it was William Thornton, also a brother of the Hon. Matthew.

william
William married Dorcas Little by 1744, together they had six children that lived to adulthood. Dorcas died in 1763 when the family lived in New York.  William left NY and returned to New Hampshire in 1774. He was in Thornton, NH by 1775. He married for a second time, either in NY or NH to a woman named Elinor.  William died in 1790.  At the time of his death he left three children under the age of 7: Abram, Sarah and Catherine.  His will was finally probated in 1798 and Elinor, who had already remarried, received her dower land.  This second wife and second set of children are completely left out of the Adams manuscript. Could William be the man with two wives and 22 children?

If William were the father of Samuel and Dorcas then the list of his second set of children looks like this: 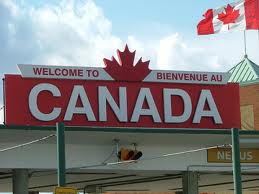 If William was not the father of Samuel and Dorcas, how did they get to Thornton, where did they live, who did they live with?  Their sister Catherine Thornton, who never married, also lived in Thornton.  She is in the 1830 census and later lives with Dorcas' family.  To my mind, given the total lack of info on Samuel speaks more to the possibility that he died young without children than the idea that he ran off to Quebec during the American Revolution.
What do you think?

UPDATE: I HAVE FOUND PROOF THAT SAMUEL WAS THE SON OF WILLIAM please see this link for the story.