Not many people can claim to have a martyr in their family, and by martyr I mean the honest to God type that died for their religious beliefs, not your long suffering relative who had to put up with their (fill in the blank) family members. I was actually shocked when I found about this man, Richard Hunne, and his connection to my family. 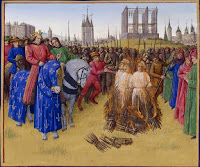 England in 1500 was still a firmly catholic nation. Martin Luther would not post his manifest until 1517, Henry the VIII was still a boy, he would be crowned in 1509, but would not make his break from Rome until the late 1520's.  Still, there were the beginnings of dissent against the all powerful church.  The Lollard movement has lost much of its steam after the execution of Sir John Oldcastle, but there were pockets of of dissatisfied believers who agitated quietly, and some not so quietly, for change. Each one risking their like for doing so. What follows is a convoluted but very interesting story which includes many prominent men of the Tudor time, including Henry VIII.

richard
Richard Hunne was a merchant tailor who lived on Bridge Street in the parish of St. Margaret in London.  His date of birth is unknown, he was married and had had at least two children. A boy, named Stephen, was born in 1511.  This boy was "put to nurse" to a woman named Mistress Agnes Snow in the parish of St. Mary of Matfelon in Whitechapel. The child, as did many at that time, did not survive.  He was buried on 29 March 1511. Following the funeral the parish priest Thomas Dryffeld demanded payment for his services, asking for the christening gown in which the body of the child was wrapped. Richard refused.


Over a year later Thomas Dryffeld, still tying to get his mortuary fees, cited Richard before the spiritual court at Lambeth Palace, the London home of the Archbishop of Canterbury. Richard received  his summons on Wednesday April 28.  He presented himself in court on 13 May, presiding over the court was Cuthbert Tunstall, auditor for the Auditor of Cases for the Archbishop. Dryffeld demanded that Richard be excommunicated in addition to paying his funeral fee. Tunstall found against Richard and ordered that he turn over the gown or pay it's equivalent value, he declined to excommunicate him.

On 27 Dec 1512 Richard, along with friends and or associates, attended a service at St. Mary Matfelon. The Chaplain, Henry Marshall, who was officiating the service spotted Richard, stopped the service and spoke loudly to Richard Hunne saying " thou art accursed, and thou standest accursed. An go thou therefore out of the church." This would surely have been greatly embarrassing for Richard and would lead his associates to believe that he had been excommunicated, making him a pariah.

Richard brought a charge of slander against Marshall before the Kings Bench on 25 January 1513.  The immediate result seemed to have been a bit of confusion as to whether or not Richard had been excommunicated and the trial was adjourned until Friday April 8th.  The church seems to have taken this break to actually follow through and excommunicate him.
Richard shot back with the very unusual and highly inflammatory Writ of Praemunire.

This writ which was first implemented by Richard II in 1306 is a based on the idea that no foreign power, either political or religious, i.e.  the Pope in Rome, could encroach on, or limit the powers of the English King. This is the same writ that Henry VIII would eventually use during his break with Rome.

Richard Hunne's biggest obstacle in winning his case lay in the make up of the judges of the King's Bench.  Many of them may have owed their loyalty or position to the Arch Bishop of Canterbury.  If they found for the defendant, a Priest, they would be seemingly giving the church a higher power that the King. Their decision was to once again adjourn the case until Monday 13 November 1514. 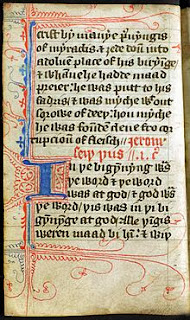 Meanwhile, Richard was arrested and charged with heresy and imprisoned in the Lollard's Tower at the Cathedral of St. Paul. Apparently he owned a bible, written in English. On 4 December 1514, he was found hanged in his cell.  It was obvious to all that he had been murdered. You would think that this would have been the end of it, but the church persued it's heresy case against Richard, trying his now dead body and finding it guilty.  On 20 December Richard Hunne's body was burned at he stake at Smithfields.

William Horsey, the chancellor to the Bishop of London, was eventually charged with the murder of Richard Hunne. He chose to be tried in the King's Court as opposed to the ecclesiastical court.  Cardinal Thomas Wolsey asked the king, Henry VIII to intervene, which he did, and ordered his attorney to find Horsey innocent.  Some seven years after Richard's death, King Henry reversed his opinion on the case and wrote to Horsey, saying he knew he was guilty and that he, Horsey would restore to the family of Richard Henne the value of his estate, which was quite large.


Richard's sacrifice may not be known by many people, especially today, 500 hundred years later,  and his death may not have had much of an impact on the religious changes that were coming, but I think it did have an impact on his future son in law, Adam Winthop, Jr.  The very fact that he would marry the daughter of such a controversial figure, at least in his day, speaks volumes of the religious beliefs of Adam Winthrop.  Why would he align himself with a heretical man if he did not share common thoughts and values.  Was this the Winthop families' first step towards the radical decision to leave t England for a new land in which they would be free from all things Catholic, possibly.

To read a more thorough account of Richard's case see this aritcle by W. R. Cooper. It is the best article I have found on the subject.