Humphrey Munning is said to have been born in Nedging, the son of Thomas Munning and Unknown Barker.  His mother died at some point and his father remarried a woman named Alice Risby, she was a widow. Thomas Munning called himself a Gentleman and judging by his will he was fairly well off, owning properties in several villages in Suffolk. Most of what we know about these families is from their wills.

In 1557 when Thomas Munning died, Humphrey, his eldest son, was already out of the house, married and living on a farm called Hazelwood. This farm must have been near the village of Freston as most of his children were baptized there. His wife was a woman named Ellen Ungle.

His children baptized in Freston were:

After Humphry his children were baptized in Semer, closer to where he was born. They were: 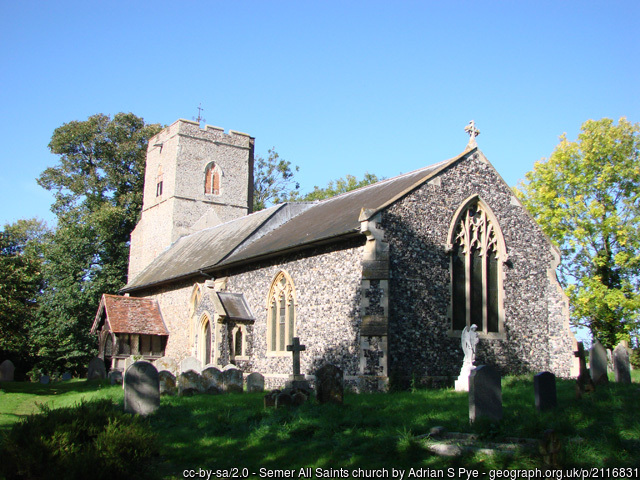 Parish Church of Semer -All Saints

Based on these dates, I think Ellen  Ungle was likely born about 1530 as she would have given birth to her last child by age 40, which is reasonable. Some websites list her birth as 1514 which would make her way to old to be the mother of all of Humphrey's children. As she is named in Alice Risby's will in 1587 we know that she was.

In his father's will Humphrey was left a piece of silver that once belonged to his grandfather, Henry Munning, a gown lined with fox fur, 4 silver spoons, one great brass pot with feet, one horse, 5 seams of barley and 3 seams of wheat, 20￡, a winged leaved table, a further 10￡ all under the condition that he not vex or trouble his Executrix, his step-mother Alice. Was there bad blood between them? Did Thomas suspect that his eldest son would take advantage of her?

In her will, Alice mentions Humphrey and Ellen. To Ellen she left her best hat. Humphrey got 20 shillings and each of their child 5 shillings. Clearly whatever might have happened was put behind them by then. Not mentioned in her will was her son George Munning who was named in his father's will. This might have something to do with Humphrey moving back to Semer. Maybe he inherited George's land? I'm just throwing that out as a theory.

Humphrey's estate was administered in 1596.