﻿﻿
﻿﻿Today I was reading a﻿﻿ book about the transition from Elizabeth I to James I of England. The book was addressing the attitude of the English towards the Scottish people. There was a quote which came from that period that stated that in 1603 there were only about 50-60 Scottish people in all of London. The reason I am writing about this has to do with the parents of Richard Currier of Salisbury, Massachusetts. A search of ancestry.com has Richard born in Strawberry Bank, Glasgow, Lanarkshire, Scotland. A quick search of the maps reveals no such place, but more than that it just doesn't make any sense that he would be from Scotland.

Time Traveling Parents. ﻿﻿﻿
An even bigger whopper is attached to his wife Ann.  In over 30 ancestry.com trees her parents are listed and Howard Arthur Turner b. 1919 d. 1969 and his wife Jennie Elizabeth Payne b. 1907 d. 1997.  They must have been time travelers! Ancestry.com is a great tool however, you still need to do your own research to confirm your findings, there is a lot of what I call "Junky Genealogy" out there.

﻿﻿﻿English Origins. ﻿﻿
So who were Richard and Ann Currier? It is highly likely that Richard was originally from Salisbury, Wiltshire, England.  Promising candidates for his parents are Thomas and Martha Osborne Currier. on 14 January 1611 at St. Thomas Church in Salisbury. ﻿﻿

on 3 March 1616.  Richard, when he was about 47 swore in court that he had been servant to Mr. . Francis was a leading citizen in Salisbury, England, he was twice Mayor of that town.  He married Alice Batt, the widow of Peter Thacher, Vicar of St. Edmund's in Salisbury.  She was also the sister of , and her son the Puritan Rev. Thomas Thacher, was a minister in Weymouth, Mass. Francis and Alice came to the Massachusetts Bay Colony, but returned to England, where he died in 1666, in Salisbury, England.  Mr. was one of Salisbury, Mass. Taken all together, it makes sense, but not definitively proven. ﻿﻿
﻿﻿
﻿﻿
﻿﻿Mystery Wife. ﻿﻿
Ann, the wife of Richard is more elusive.  as Turner or Brown.  She and Richard married prior to 1643 in Salisbury, Mass. She, like most women of that time, appears very little in the town records, and about her. ﻿﻿

Coming to America. ﻿﻿﻿﻿
or on what ship Richard traveled to the Colony. His name first appears on the list of proprietors of the newly formed town of Salisbury. On the first plat map of Salisbury, Richard Currier's town land is on the ring road, next to the Meetinghouse. Abraham Morrill is next to him. He received land in 41 and 42.  Richard took the "Oath of Fidelity" in front of Lt. Pike in 1646. In 1648 he sold his land in Salisbury to Abraham Morrill and moved across the River to the new town of Amesbury.  ﻿﻿﻿﻿﻿﻿
﻿﻿
﻿﻿
Richard's name began to appear more frequently in town records.  He played a much bigger role in the of Amesbury.  He was town clerk, selectman, Prudential Man at various times.  He and owned and operated a sawmill, and he bought and sold a good bit of land. 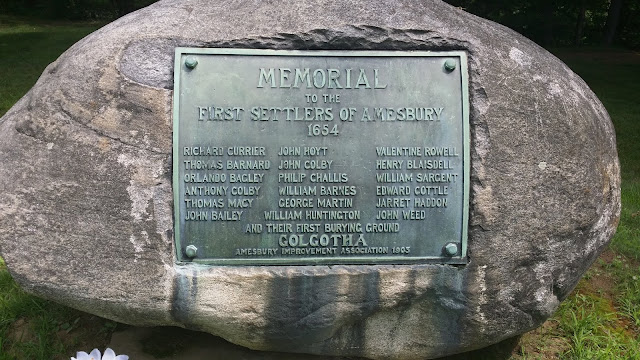 ﻿﻿RIP﻿﻿
Ann died before 20 Oct 1676, when Richard married for a second time to the twice widowed Joanna Pinder.  She had been wife to Valentine Rowell and . Richard and Joanna spent their last years in the home of her son Phillip Rowell. Richard died on 22 Feb 1686/7 and Joanna died in 1690, having outlived yet another husband. to have fallen through thin ice on the mill pond and drowned, about 70.﻿﻿

﻿﻿Hoyt suggested in his book that perhaps Jeffrey Currier was a son of Richard, but no evidence has been offered.
﻿Hannah Currier married Samuel Foote in 1659.  They lived in Amesbury.  on July 7, 1690, that day.  ﻿﻿﻿﻿

﻿﻿Thomas Currier married in 1668 to Mary Osgood, daughter of William and Elizabeth Osgood of ﻿﻿Salisbury.  He too was very active in the affairs of Amesbury.  He was town clerk, after his father, for 38 years, a selectman, a deacon in the church, he also operated the sawmill.  He and Mary had 12 children.  He died in 1712 at 66. These are my ancestors. 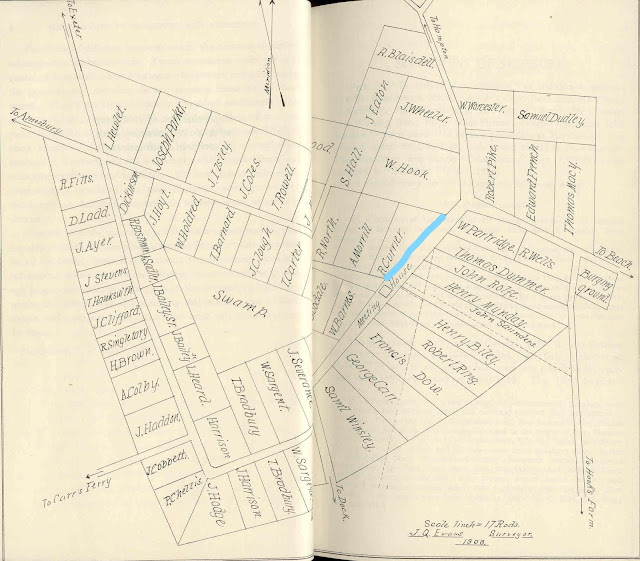 Harvey Lear Currier, Genealogy of Richard Currier of Salisbury and Amesbury, MA 1616-1686/7 and Many of His Descendants

My brotherand i would like to know when richard currier came here to what is now america. we are trying to plan a trip to ma some time around 2038 400 years, but hoping it was sooner than that . 1616 was his birth year and 1638 when he shows up in amesbury, but was in salisbury before that

Unfortunately, I don't think we will ever know exactly what year Richard arrived in New England. Men generally received land within a year of their arrival so 1637 is a best guess.

I'm.related to Richard Currier. He married Ann in Salisbury England. They had Hannah Currier and Thomas Currier. Ann died in 1675. Richard married Joanna Pindor Oct 26, 1646.my email is shaina@stellardots.com if u want me to email you info. My grandfather was Charles Hutches Currier. I live in California.