Please see this blog article concerning the father of Samuel 2

Unfortunately for me, my ancestor Samuel, son of James and Elizabeth Thornton, left very little evidence of his whereabouts and family life.  According to family tradition he married twice and had 22 children, eleven by each wife. He was definitely in Pelham, and is mentioned in the records, as the town owed him money for some service.  He is said to have lived in both Campton, Grafton, New Hampshire and in Hatley, Stanstead, Canada. His brother Matthew was something of a land speculator and it is possible that Samuel lived on land owned by Matthew.

Of the 22 children only the names of 10 ( of the second bunch) are known, and of those only two are traceable: Samuel (2) born 1775 and Dorcus, born 1779.  Dorcus married John Durgin and their family is well documented.  Our ancestor is Samuel (2).  His mother is unknown, and the date and place of his  death is also unknown. He was not buried in the Thornton cemetery so it is possible he died in Canada. I have also seen on the web the idea that Samuel was possibly a loyalist, hence the move to Canada.

Thankfully, a bit more is known about Samuel (2). He was born in New Hampshire in the year 1775, probably in Thornton, Grafton County, New Hampshire. Family history says that at the age of seventeen Samuel traveled to London, England where he worked with Iron Masters, learning the trade. The Adams Manuscript states that “he adopted a system of coking which gave him great success among the Iron Masters near London”. Samuel (2) returned to New Hampshire prior to 1802, and is possibly the Samuel Thornton in the 1800 census in Thornton NH.  If he left at 17 in 1792 and returned by age 26 or 27, he was  in England for about 10 years.  I have no reason to believe that the Manuscript is incorrect other than the fact that he seems to be a farmer for the remainder of his life.
In 1802 Samuel married Katherine Baker, daughter of Benjamin Baker and Sarah Norris. She was born in 1779 in Campton, New Hampshire. Their first child, a daughter Hannah, was born in Campton.  They had at least seven other children, most of them born in Hatley, Stanstead, Canada, including my ancestor Samuel (3). Their oldest son, David, was born in Canada in 1808 and their last child, John, was also born in Canada in 1818.  Their daughter Hannah was married in Canada in 1822. After 1822 I cannot pin point their location until the 1840 U.S. Federal census, which showed them living in Wheelock, Vermont.
At this time period the Canada US border is very open and fluid, with families moving back and forth. Hatley is just on the other side of the border from Vermont. In 1800 it was an undeveloped remote area with no roads, or towns.  Many people tried to settle there and gave up due to the harsh conditions.
In 1840 the census only listed the name of the head of the household. At the home of Samuel Thornton there were 8 people, two are small children.  In the 1850 census all names are listed and Samuel and Catherine were living on a farm in Wheelock with sons David and John and their families living on adjoining farms.  In the 1860 census Samuel, (2) lived with his son David. Catherine, his wife, died that year and he passed away in 1866. There is a death certificate for a Samuel Thornton who died in Hatley in 1866 and is buried in  Canada, it is possible that this is him.

Samuel was born in 1816 in Hatley, Quebec Canada. At the time it was known as Canada East. He was married to Chloe Flora Blanchard in 1841 in Wheelock, Vermont. Chloe was the daughter of James and Phebe Carter Blanchard. Chloe was born in Vermont in  1819.  They had at least 10 children, the first born in Greensboro, Vermont and the last born in 1859 in Wheelock Vermont. 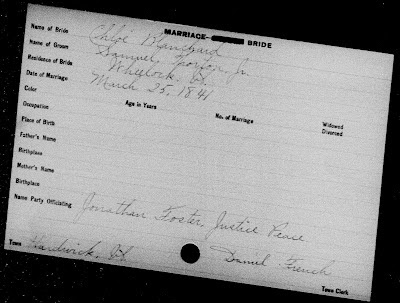 In the 1850 census the family was living in Greensboro, Samuel was a farmer.  They had six children, the youngest was a boy named Alva, his age was 6 months, he does not appear in the 1860 census, presumably having died sometime in the intervening years.  By the 1860 census the family had returned to Wheelock and lived on a farm next to his brother David. Their brother John had died in 1855 and it is possible that Samuel moved back to Wheelock and took over his farm.  This was a rough time for the family, his brother David and his wife Lydia Clark Thornton lost four children in February 1859. In 1860 seven of Samuel’s children were living with them, the two oldest, both girls are not at home. John, our ancestor is one year of age.
By the time of the 1870 census the family had moved once again, this time to Hardwick, Vermont. Samuel’s brother David left Wheelock as well but moved back to Campton, New Hampshire. Samuel and Chloe lived with five of their children.  Samuel died in 1874 and Chloe in 1876. They are buried somewhere near Hardwick, Vermont.  Their son Nathan, died in 1878, age 25 of tuberculosis. Their daughter Maria married Van Doran Niles, she was the mother of Lida Niles who used to live Jennie Clover Rowell Thornton.  After Maria died, Van Doran Niles married Malvina Tatro Thornton, the widow of Maria’s brother Joseph N. Thornton. Maria and her brother died the same year, 1898.
The children of Samuel and Chloe were: 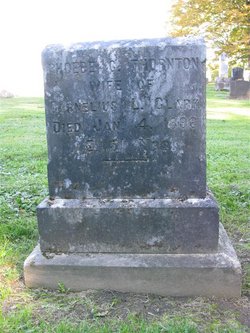 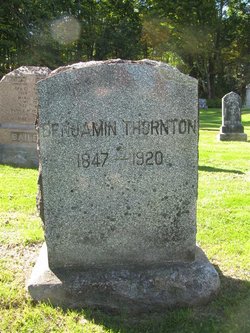