A perusal of the web and website for the genealogy of Roger Shaw of Cambridge and Hampton, New New Hampshire reveals a mishmash of bad research or a complete lack of research and a lot of what I call "copy and paste" genealogy.  which he compiled in his article "The English Origins of Roger and Ann Shaw of Cambridge, Massachusetts and Hampton, New Hampshire".  in the New England Historical and Genealogical Register in 2004. Many genealogies use the book "Shaw Records: A Memorial of Roger Shaw" by Harriette F. Farwell as the basis of their information.  This book is full of errors, some almost laughable. I especially love the claim that he received a grant of land from King Charles II on 15 November 1647. If you don't get it look it up yourself.

origins
According to most family trees available on the internet Roger was born in London to a Ralph Shaw, past researchers used the fact that he in any record in England as proof of his departure for New England. If he was in fact born in London in 1594 and arrived in Massachusetts in 1638, he lived 44 years in London with no records of marriage or children.  This seems unlikely to me and I would not think it compelling evidence that this was Roger the immigrant.

According to the research by Edgar J. Shaw, Roger Shaw was born in Cheshire, England around the village of Congleton in about the year 1600. The parish register at St. James Church in Gawsworth list the baptisms of Roger Shaw's first children. The mother . The entries for the baptism of Margaret, Mary, Ann and Joseph can in a search of the Family Search website.

I found this interesting bit about Congleton on Wikipedia:  During the Civil War, former Congleton mayor and lawyer, John Bradshaw, became president of the court which sent Charles I to in 1649. His signature as Attorney General was the first on the king's death warrant. There is a plaque commemorating him on Bradshaw House in Lawton Street. Almost opposite the town hall, the White Lion public house bears a blue plaque, placed by the Congleton Civic Society, which reads: The White Lion, built 16th-17th century. Said to have housed the attorney's office where John Bradshaw, regicide, served his articles. 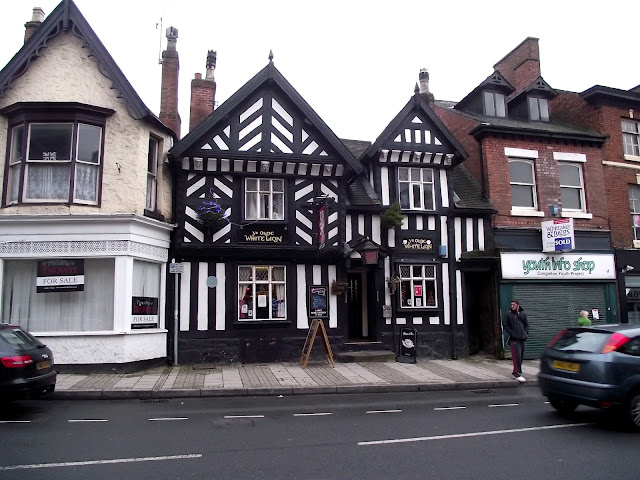 
﻿﻿﻿﻿﻿parents
In his article Shaw also discusses his research into the parents of Roger Shaw.  Based on a search of the probate records found in the Court of Chester, he pinpoint the parents of Roger to Roger and Margery Shaw of Astbury and Hulme Walfield, and also identify a brother, Humphrey. In his will, Roger Sr. left his estate to his two sons, Roger and Humphrey, and in Humphrey's will of 1652 he left the land h of his brother Roger Shaw to one of his sons. However, when compared with parish records, were two men named Roger Shaw who lived as close neighbors, one in Congleton and one in Gawsworth. Our Roger is the one from Gawsworth and his parents are unknown.

arrival in
Roger and his family arrived in the Massachusetts Bay Colony prior to the fourth month of 1638 when his daughter Ester's birth at Cambridge, Massachusetts. On 14 March 1638/9 a Freeman of the Colony, which meant he had also become a member of the Church. Roger jumped right into the running of the town and the new Colony, then less than ten years old.  He was a selectman for Cambridge in 1641,42,44, and 45. Cambridge Town Clerk in 1642. According to the book the History of Cambridge "he bought a house and land on the southerly side of ".  still exists in Cambridge.

His daughter Mary, born in Gawsworth, died in Cambridge in 1639, but another daughter Mary was born in 1645. Roger's wife Ann died after this birth and his remove to Hampton where Roger a seat in the meeting house and no wife , but a seat for a future Mrs. Shaw.

Roger's name crops up occasionally in the Records of both the General Court of the Colony and the Quarterly Courts of Essex County. the first mention of Roger Shaw in the General Court's records was in 1639 when he was a juror in the trial of Marmaduke Percy, who of beating his apprentice to death. Marmaduke got off, apparently the poor boy deserved the beating.  ﻿﻿

O 15 Nov 1647 (the date from earlier in the article) Roger bought an estate in the town of Hampton from John Crosse, Sr. for 101.15 pounds. The estate included houses, grounds, marsh, meadow, swamp, upland and commonage. Roger was not one of the original petitioners for the formation of the plantation of Hampton. That petition to the General Court on 6 September 1638 and headed by the Reverend Stephen Bachiler.﻿﻿﻿﻿﻿

A he did in Cambridge, John was immediately active in service to the town of Hampton. He served as Deputy to to end small causes, and served on both jury and the grand jury. It that Roger permission by the General Court to operate an "Ordinary" in Hampton.  An ordinary was where you sold alcohol. I have read through all the records of the General Court and the Quarterly Courts and cannot find any mention of this action.  he was supposed to be operating an ordinary was given as further proof that he was the Roger Shaw of London, son of Ralph, who was a vintner.

In 1653 Roger remarried to Susanna, widow of William Tilton.  In a prenuptial agreement, he agreed to take care of her sons by her first husband.  Unfortunately, she died the following year. Roger did not marry again. He died in Hampton on 29 May 1661.

Roger and Ann Shaw had the following children:


If you think I have made any errors in this article, please comment and let me know, especially the bit about Roger running an ordinary. ﻿﻿ 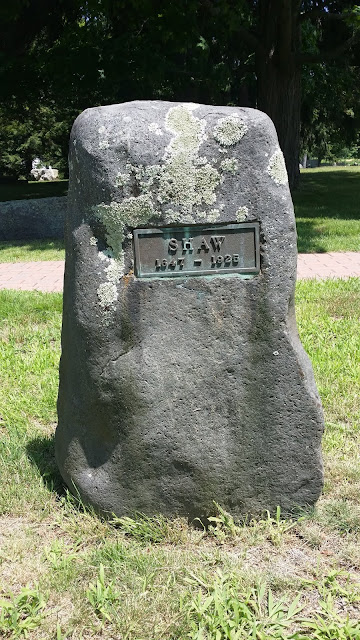 It is serendipity that you would post a story about SHAW this week, with a photo of the stone at Founder's Park. I ran a blog post about the memorial stones' last week, too http://nutfieldgenealogy.blogspot.com/2012/05/founders-park-hampton-new-hampshire.html

Heather, I love your blog, I read all your posts! I have even commented on some.

I am a direct descendant of Roger Shaw. My father grew up in Nashua, NH, moved around the country until he finally settled in Hampton Falls in the 90s. We attend the Hampton Congregational Church, a church that Roger supposedly helped found. The found families' mass was last month I think. It's funny seeing the names of other families still living in the Hampton area, such as the Bachilers and Foggs. The Fogg family has been entrenched in Seabrook for a long time. That headstone for Benjamin Shaw is located at the Shaw cemetery on Route 1 on the border of Hampton Falls and Hampton.
Really interesting and relatable article.