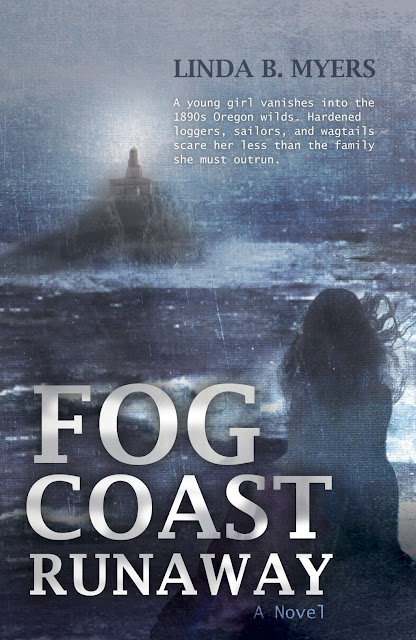 Disclosure: I was given a copy of this book in exchange for my review. The opinions contained in their review are my own.

The Plot in brief: Set in the 1890s West Coast. 13-year-old Adelia has a rough life with her neglectful father and abusive brother and when it reaches the breaking point, she runs. In the town of Seaside she finds a new life and a new beginning, but she can’t outrun trouble. Over the course of a year, Adelia cobbles together a makeshift family of misfits, loners and other like her on the run from their past. Adelia’s search for safety, love and happiness takes her from the Oregon Coast to an inland logging camp and back to riverside town of Astoria.

The Characters: Adelia is well drawn and a compelling main character. She captivated my attention from the start and I cheered her on through her adventures, her highs and her many lows. There are numerous other characters who fill the pages of this book, each a unique figure in Adelia’s life. I enjoyed the mix of nationalities, especially the Finns. It brought to life the melting pot that was the West Coast at the time.

The History: 1890s Oregon and California were rough and tumble places, very different from the East Coast at that time. The story felt well researched and authentic.

The Writing: Written in 3rd person POV, I enjoyed the pace of the novel, not to fast, not to slow. It has a steady progression.  The prose is good and well written and easy to understand. I enjoyed the inclusion of period songs and slang which added to the historic atmosphere.  I thought that some of the dialogue was too adult for 13 year Adelia, despite her maturity; I had a hard time picturing her speaking some of her lines.

Conclusion: I really enjoyed the story and the setting. I do have one caveat, without giving away the plot, some of Adelia’s actions made me very uncomfortable and in order to read the book I had to reset her age in my head.

I would rate this book 4 stars out of 5 and recommend it to readers of historical fiction and those who enjoy coming of age stories.

Historical Fiction Book Review: The Fiery Salamander by Will Robinson 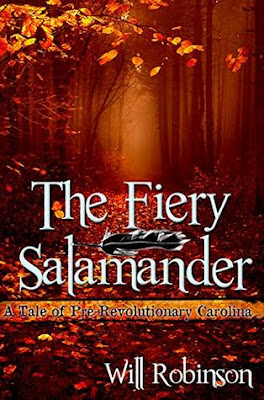 Historical Book Review: The Fiery Salamander by Will Robinson. Independently published on 13 January 2019. 417 pages. Book 1 of Back Country Novels. I was given a copy of this book in exchange for a review. The opinions given in this review are mine alone.

The Plot in Brief:
Set in the year 1763 in the British Colony of Carolina.  This is the story of 14 year old James Kirkpatrick, his extended family and close-knit neighbors. Life is hard for these back-country Scots-Irish settlers who eke out a living on their remote farms. An Indian raid sets in motion a series of events which dictate the next four years of James' life. As his life unfolds, he is pushed, pulled, shaped and molded, by family, friends, life, death and of course love.

The Characters:
The author has done an excellent job fleshing out his characters, giving them distinct personalities and character traits. I felt I knew them all. Over the course of the book we see James evolve from a boy on the cusp of manhood to his maturity. His character is complex and multidimensional. Quite a few of the characters are Native Americans and I thought the author did a great job bring them to life and treated their plight with sensitivity and understanding.  I appreciate that the good guys are flawed and the bad guys can earn our sympathy.

The History:
Although there are few obvious 'historical events' that occur in this book, the historical setting seems spot on. The setting, the people, the way they dressed, spoke and lived are detailed and appear to be very accurate. I did not see anything that was 'out of time'. As a history buff, I was interested in the upcountry system of justice and the 'Regulators', the vigilante group which formed to enforce the laws and keep the peace. As a descendant of Scots-Irish immigrants I was also glad to see them accurately portrayed.

The Writing:
The book is written in first person-present tense. Present tense is not my favorite as it is very easy to screw up. However, the author does a fine job and I was soon comfortable with his style. The pace zips along in the beginning and again at the end. I felt it dragged at times in the middle, but never enough to put me off. So this leads me to the one thing that I didn't like; the author employs a great deal of 18th century Scots-Irish vernacular. Reading his narrative and dialogue made me feel hate narvish. Know what that means? Neither did I. There were times when I thought the use of Scots-Irish words detracted from the story telling. This may not bother every reader, but I had to stop and look up the meaning of many of these words. Luckily, there is a Dictionary of Ulster Scots which I used to decipher his meaning.

Conclusion:
I really enjoyed this coming of age book. I think anyone who enjoys historical fiction, or has a particular interest in the region or time period will appreciate James' story. I would not hesitate to recommend The Fiery Salamander.
- April 14, 2019 No comments: Links to this post 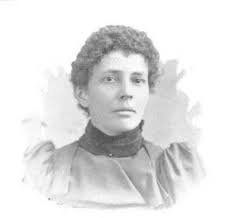 A reader recently contacted me and told me a little about a descendant of Samuel Clyde and Catherine Wasson Clyde about whom I've written extensively. I have not followed the genealogy of all of the couples children so I was surprised to find out about their amazing great-granddaughter; Caroline Clyde Holt. Here is what I know about Caroline.

In 1881 Caroline, who went by "Carrie" married Charles Fredrick Holly, also an attorney. They were living in New York in 1885 when their daughter Emily Ethel was baptized in a church for the Deaf.
The family moved to Colorado by 1889. Charles was significantly older than her. He was born in 1819 and was a Colorado Territorial Supreme Court Justice in 1865. He also served during the civil war.

In 1893 Colorado voted to enfranchise women, women could not only vote but run for office. Caroline, who is said to have studied law under her husband, took was active in the Women's Suffrage Movement. She ran for public office, first as a member of the School Board and then in 1895, along with two other women, for the State Legislature. All three were elected.

Carrie Holly was the first female to introduce a bill into legislature. Her desire to fight for women extended to the right to consent. At the time, the legal age of consent for women was 16. Carrie's bill, which passed, raised it to 18. [2]

Caroline Clyde Holly is still honored in Colorado as a pioneer of Women's Rights. I think her grandmother Catherine Wasson Clyde would have been very proud of her achievements. 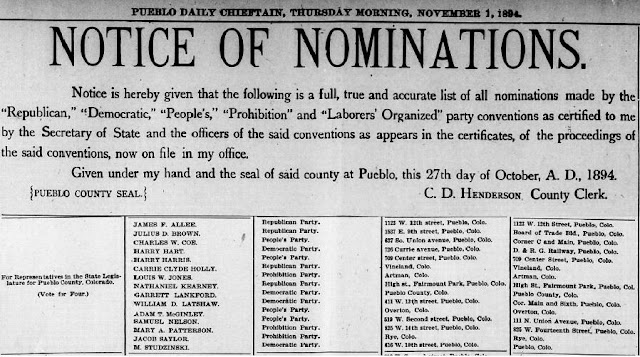 As you might have guessed by now, I have an affinity for witches. No, not the spell casting,  cauldron brewing witches, but the real women and men of Colonial New England who were accused and tried for witchcraft. I am related to at least one accused witch, Mary Perkins Bradbury and to several witch accusers. What a terrifying time to live, when you believed that your neighbors, the very people you counted on for support, were giving you the evil eye, killing your children, your livestock, making you ill, and all manner of devilish acts.

The first and lesser known cases of witchcraft in the colonies occurred in Connecticut. Their were cases in other colonies as well but the brunt of the trials were in Massachusetts. Of course the best known witch trials were those that were held in 1692 in Salem. But, women, and to a lesser extent men, from all over the Colony of Massachusetts found themselves ensnared in the web of witchcraft. I can only imagine their horror, knowing they faced at best stigmatization from their peers to worst case losing all they held dear, including their lives.

I want to tell you about a great website/blog that is a super resource if you are researching your witchcraft ancestors, both accused and accuser. This site includes research, resources, genealogy links, road trip plans, notes on historic sites linked to witchcraft, the whole shebang.  You can find all this and more at Witches of Massachusetts Bay Here is a link to the blog article on my book, Weave a Web of Witchcraft

and an interview with the author (me).

This website, hosted by the library of Virginia is a Salem Witch lovers dream. Court records, testimony, maps, records books, and letters. This site has it all. Easy to navigate and chock a block full of fascinating information if you are into the Salem Trials. The information here is top-notch.