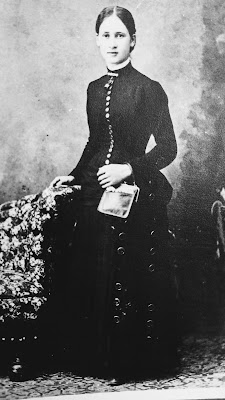 This is the second batch of photos that were recently found in a resale shop. This beauty is Martha Ann Morris aged about 16 according to the writing on the back of the photo. She was born in Canada on in 1869. On 28 January 1891 she married Angus Knuff. Agnes and Martha can be found on the Canadian census for Battleford, Saskatchewan for many years. In 1930 Martha was living in Los Angeles with her daughter, Loretta Moore. Both she and Angus applied for Social Security in the United States. Martha died on 12 April 1935 and is buried in Los Angeles. Angus died in 1951 and is buried in Canada. These photos were part of collection that included the Jennison Family of Mason City, Iowa who also moved to L.A.


According to a second photo, Martha Ann was raised by her grandparents and later became a 'mothers helper for a family named Morrison. Pictured below. However there is an ancestry tree which lists her parents as Matthew Morris and Emma Hutchinson. Both of these names are on the back of this photo. I suspect that these folks are her parents. 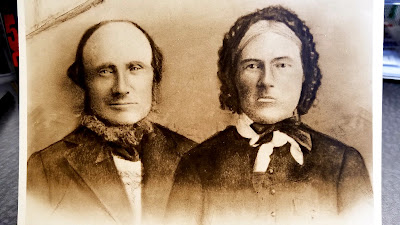 Here is a photo of two of Martha's children Loretta Alberta and 'Fernie'. The dog is not named. 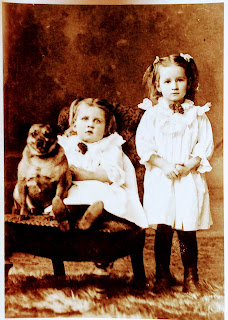 Are these your ancestors or people in your tree? Would you like these photos? Send me a message with your name and address. What I ask in return is a donation of $10.00 to cover the cost of mailing envelop and postage and a bit of my time or....you can buy a copy of my book. Either way, please contact me and I will be happy to get them in the mail.
- September 13, 2018 No comments: Links to this post

Horton Clark Jennison (1847-1939) son of George Henry Jennison of Swanton, Vermont: Is this your family?

Taking a break from my second novel to post some pictures that were donated to a resale shop. This handsome man is Horton Clark Jennison. He was born on 24 March 1874 in Mason City, Iowa. Mason City is due north of Des Moines, and sorry Iowa but it appears to be in the middle of nowhere.  Sorry just sayin. Anyway Horton's parents were George Henry Jennison and Addie Mary Potter, originally from Swanton, Vermont. According to an ancestry tree George Henry was the son of Nahum Eager Jennison (no that's not a typo). Nahum Eager was a minute man in Massachusetts, probably a friend or hero to the parents. In fact I just found a reference for a Israel Jennison whose married daughter was Sarah Eager, so it seems they were related.

If this ancestry is correct, which at first glance seems plausible. Nahum was born on 24 April 1793 in Worcester, MA, he died 8 August 1849 in Swanton, Vermont. Swanton is just shy of the Canadian border. Nahum married Betsy Hubbard in Swanton on 5 January 1824 and had at least nine children, George Henry coming at the end. George married Addie Mary Potter of St. Albans. At some time after their marriage the couple moved to Mason City, Iowa.

Horton, who was a clerk in a store,  married Anna Hutchins on 8 June 1910 in Cerro County, Iowa. In 1916 Horton and his family were living in Los Angeles, California, working as a clerk. His sister Addie Lou Jennison Hathaway and her husband Earl had also removed to California. Below is one of two pictures of Horton and his fellow employees.

This is a picture of Addie Lou Jennison Hathaway, Lou was Horton's sister. On the back it say's it was taken about 1910. 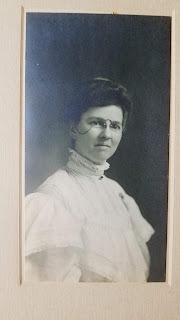 So, do you know these folk? More importantly do you want these photos? If so, please contact me with your mailing address. What I ask in return is one of two things: $10.00 via the donate button above to cover the cost of photo mailing envelop, postage and my time or buy my book, the digital version is  under $10.00.