John Hammond and Agnes Garrold of Lavenham; Parents of Thomas Hammond, or were they?

It fun to see how far back in time we can trace our ancestors. When the years roll back and I'm finding names in the sixteen century, I get really excited. However, when we get this far back, the caution light needs to be on. As records become sparse, it's easy to make mistakes, and relying on the family trees on ancestry.com is a big mistake. Genealogy, good genealogy that is, is fun, but make no mistake about it, it's hard work. Here is a great example of why you need to do your own homework. Two men named John Hammond married women named Agnes. Both families lived in the county of Suffolk in England. One couple were the parents of Thomas Hammond who married Rose Tripp, who children were the Hammond immigrants to New England. Do you know which John and Agnes were Thomas' parents?

John Hammond and Agnes Garrold of Lawshall
The Hammond family of Lawshall can be found in the parish records of All Saints as well as the probate courts back as far as the fifteen century. The earliest Lawshall Hammond will is that of John Hammond dated 1441. Although you cannot say for certain if the land was passed from father to son, the names Kynges House, Woodfield croft, Hawstead, appear in will after will. The family held at one time the Manor of Lawshall and Shrimpling Hall. Hammond births, marriage and burials fill the Lawshall parish registers. This was a family, whose heirs at least, remain in situ for almost two hundred years. [1]

John Hammond wrote his will 16 Sept. 1588. He was probably born by 1535, as he had a daughter, Ann Hammond Sparrow, who born by 1560 as she was married in 1579. John named in his will his wife Agnes, his children Thomas, John, Philip and Joan. He was buried in the parish of All Saints on 13 March 1588/89. [2] He was identified as John Hammond the elder of Salters. His son Thomas may have inherited Salters as a Thomas Hammond left it to his son Robert in 1621. [3]

Agnes Garrold Hammond wrote her will in February of 1589, shortly before he husband died. She named in her will her children Thomas, John, Philip, Joan and her daughter Ann Sparrow. Her brothers Robert and John Garrold, named in her will, confirm her identity. [4] Agnes died in Lawshall and was buried at All Saints on 17 June 1591.[5]

This is the Hammond family of Lawshall.

John and Agnes Hammond of Lavenham 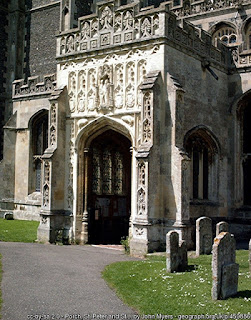 The Hammond family of Lavenham can also trace its ancestry through the wills and probates of their forefathers. Beginning with John Hammond of (Long) Melford who wrote his will in 1517 and died in 1528. It is very possible that he was related to the Hammonds of Lawshall. [6]

John Hammond of Lavenham was a clothier; he was born about 1500. He was the son of John of Melford. His wife's name was Agnes. Unlike the Hammonds of Lawshall who were farmers, the Hammonds of Lavenham were involved in the cloth business. In fact the town of Lavenham grew rich on the profits of the wool industry. The parish church of St. Peter and St. Paul is a monument to the wealth accrued by the merchants of Lavenham. [7]

John Hammond wrote his will in 1551. John named in his will his wife Agnes, sons William and Thomas, daughters Elizabeth, Margaret and Johan. Agnes his widow died in Lavenham on  6 January 1576/7. [8] Their son Thomas married Rose Trippe. Their son William and his wife Elizabeth Paine immigrated to New England with their children. [9]

[1] Frederick Stam Hammond, History and Genealogies of the Hammond Family in America, (Onida, NY, 1902), 35; image copy, Archives (https://wwww.archive.org/stream/historygenealogi11hamm#page/n103/mode/2up/search/Garrold : accessed 10 October 2015). Wills of both John Hammond and his wife Agnes Garrold Hammond of Lawshall, Suffolk, England as well as his ancestors.

[3] Fredrick Stam Hammond, History and Genealogy of the Hammond Family, 39.

[4] Fredrick Stam Hammond, History and Genealogy of the Hammond Family, 35.

[6] Fredrick Stam Hammond, History and Genealogy of the Hammond Family

[7] Fredrick Stam Hammond, History and Genealogy of the Hammond Family

[8] Fredrick Stam Hammond, History and Genealogy of the Hammond Family