If you are interested in early colonial American history then you know of the phenomenon called the Puritan Great Migration which began in 1630 and lasted for 15-20 years. But less than one hundred years later there was a second smaller migration from the North of Ireland that has been labeled the 1718 Migration. The people who made up this migratory group were Scots-Irish or Ulster-Scots as they are called in Ireland today. This year (2018) marked the 300th anniversary of their voyage to America. This fascinating phase in the peopling of America is understudied and deserves more attention. There is a great facebook page dedicated to the 1718 Migration which I have found very helpful. There is also a familytreedna project trying to connect descendants of those immigrants to their ancestral origins in Ireland and Scotland. Long time blogger Heather Wilkinson Rojo has profiles on many of the early Londonderry (Nutfield) on her blog a must read.

I've only recently become interested in this integral piece of my family history, hopefully you'll catch the bug as well.

Scottish Origins
The Scots-Irish/Ulster Scots, as their name implies, have their origins in Scotland. A large number of Scottish immigrants arrived in the Northern counties of Ireland during the plantation schemes, from 1607 until 1697. The plantations were limited to the counties of Antrim, Down, Armagh, Tyrone, Donegal, Cavan, Fermanagh and Derry. The purpose of the scheme, organized and fully supported by the Crown, was to fill the North of Ireland with loyal subjects. Most those who left the mainland were from Scotland but there were also English immigrants from the north of England. Scotland was only happy to rid itself of the marauding lowland border inhabitants, know as reivers. 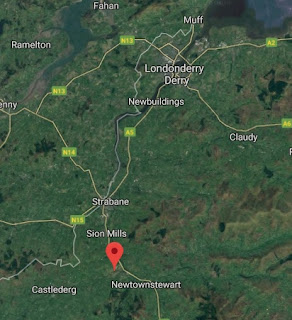 Unsettled Times
By the late 1690s many of the Scots-Irish settlers were unhappy with life in Ireland. Most were excluded  from many aspects of government and civic duties. They were being hampered in their religious life as well. Many had leases that were about to expire and faced significantly higher rents, a process known as rack-renting. The economy was weak and the British controlled export prices, the export of woolen and linen items was hampered by the Irish parliament.The Woolens Act prohibited the exportation of Irish wool and cloth to anywhere except England and Wales. To top it all off the weather lead to crop failures. A five year drought from 1714 to 1719 led to crop failures. This affected both the food supply but also the supply of flax for linen production.

Massachusetts
A letter, drafted in Ireland and signed by eight Presbyterian ministers and 319 men was sent to Governor Shute. The letter was a request to settle in the Colony. The letter was sent with Reverend Boyd, however the immigrants did not wait for a reply. The Reverend James McGregor organized about 120 families from Antrim and Londonderry and set sail from Derry and Belfast for America. They arrived in four or five ships between August and September of 1718.

Massachusetts was still a Puritan stronghold in 1718. But, they had a slight problem, the Native population continued to threatened their borders. The immigrants were not overwhelmingly welcomed and were dispatched immediately to distant settlements in New Hampshire, Maine and Massachusetts, where they could act as a barrier between Indian territory and the settled areas of Massachusetts of which Maine was still a part. The ship the Robert sailed for Casco Bay in Maine, its passengers forced to winter aboard the ship. 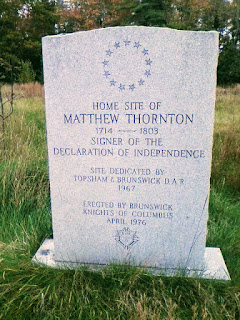 My 1718 Migration ancestors were the Thornton family who are said to be from the Strabane Valley of County Tyrone. We know that James Thornton said his father William was born in Tyrone County. William was born in 1713, son of James Thornton. There is a manuscript in the New York archives, which I have not read, which says the Thorntons were in Londonderry, Ireland during the seige, but little else. Many people believe that the Thorntons originated in Yorkshire, England, which would preclude them from being Scottish.

The Thornton Family arrived in Boston, probably on the ship the McCallum. They were part of the group who headed to Maine, first to Merrymeeting Bay and then closer to Bunswick. James had a homestead in Brunswick, Maine on the Rossmore Road. This home was consequentially burned by Natives in June of 1722. The family was forced to flee. I believe they found refuge in Marblehead.

James, along with other Marblehead Scots-Irish removed to Worcester, Massachusetts in the late 1720s. James bought and sold land, was listed in the meeting house seating records along with his two sons William, my ancestor, and Matthew, the signer of the Declaration of Independence. Worcester was not as welcoming to the Scots-Irish as they had hoped, and after some years, James and others purchased land for their own town of Lisburn/Pelham. James ended his years in the Scots-Irish stronghold of Derry.

The Ulster Scots Society of America