I started to write this blog post awhile back but got sidetracked by Pierre de Morlaix, who I hope you all know by now is a figment of imagination. We are lucky that John Perkins does have a long list of documented ancestors. 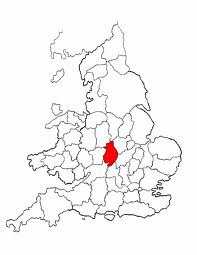 John was born in Hillmorton, Warwickshire, England. He was baptized on 23 December 1583 in the Church of St. John the Baptist.  His parents were Henry and Elizabeth (Sawbridge) Perkins.  The Village of Hillmorton no longer exists as a separate entity, it was merged with the market town of Rugby in 1932 and became a suburb, but at the time of John's birth it was a rural village near the river Avon. His family had lived in the area of Hillmorton since at least the early 1500's.

John Perkins' ancestors can be traced through their wills, beginning 1528 and the parish records of the church St. John the Baptist which provides dates for births, marriages and burials beginning in 1565. The ancestry of John Perkins in Hillmorton can be traced via a paper trail to his Great Grandparents, Thomas and Alice Perkins. Thomas, date of birth unknown, wrote his will on 3 April 1528 and it was proved a few weeks later on 21 April.  His wife Alice outlived him by 10 years, she wrote her will in July 1538 and it was proved in October of that year. A quick note about Alice, her maiden name is not known and she is definitely not the daughter of Sir Thomas and Edith (Constable) De Astley.  Thomas died in the Battle of Evesham in 1265 so I think that rules him out as her father. Thomas and Alice had at least three children that lived to adulthood, they were Henry, Jone, and Jelyan. He owned land and tenements in Hillmorton and nearby Lilborne.  In her will Alice names her son Henry and Jeyn Slayter and Juliana Cumpton, her now married daughters.  Thomas and his wife are buried under the floor of the Church of St. John the Baptist.
Henry, son of Thomas and Alice died in 1547, his will is missing but the date it was proved was recorded.  He had at least three children, his son Thomas was his heir and he  had two other children, William and Joan, who seemed to have died unmarried.

Thomas married Alice Kebble and they had at least seven sons who lived to adulthood. Thomas' will was proved in May of 1592. Thomas' oldest son was Henry, father of our John Perkins. He and his wife Elizabeth Sawbridge had at least 11 children, many of them sons. As you can see, the number of males living in the Hillmorton area was growing exponentially with each generation. I imagine that the prospect of getting land to farm might be difficult, especially if you were the youngest son.

marriage
John's father died in 1609 when John was about 26 years old, but many of his siblings were under 21. John married Judith Gater, daughter of Michael Gater of Hillmorton on 9 Oct. 1608 at St. John the Baptist. They had their first child less than a year later.  Over the next few years their family continued to grow, by 1624 they had six children.

setting sail
For whatever reason, lack of land or a desire to join the Puritan experiment, John Perkins, age 48, removed his family to the Massachusetts Bay Colony.  They left England in December 1, 1630 aboard "the Lyon".  There were only about 20 passengers on that crossing, the ship was mostly carrying cargo for the new colony. They landed Feb 5 1631 in Boston. The winter of 1630/1 was very difficult for the new Colony, almost 200 of the Colonist died and many had decided to return to England. The arrival of the Lyon, laden with much need supplies was cause for celebration and John Winthrop ordered a day of Thanksgiving and Prayer. I wonder what the Perkins family thought when they disembarked and found that many of the colonist were bailing out and taking the Lyon back to England.

ipswich
John and his family first established themselves in Boston. They joined the First Church of Boston as members number 107 and 108 and John was made a Freeman on 18 May 1631, only a few months after landing.  By 1633, however, the family had moved to the just settled plantation of Ipswich. John built his house on the river near Jeffries Neck on what is now East Street.  He received land in 1634, 1635, 1636 and 1639.

As with most men in the Colony, John was called on to perform civic duties.  He served on Grand Juries, Petit Juries, help appraise estates and set boundaries for the newly developed plantations.

In 1650 John was judged to old to participate in military training and was freed from that duty.  On 28 March 1654 John Perkins wrote his last will and testament. This will was proved on 26 September of the same year.

John lived to a good age of 71 years and was able to see his children grown, married and settled, something that few men of that time could witness.

Both Elizabeth and Mary are my ancestors.


Sources:
Notes on the Perkins Families in England chiefly extracts from probate registries, with several pedigrees appended by D. W. Perkins. Published in 1894 by S.N. Salem


McCabe, James D,The Centennial History of the United States. From the Discovery of the American continent to the Close of the First Century of American Independence,1874

**************************
Learn how to cite your sources like a professional by ordering Elizabeth Shown Mills Your Stripped Bare Guide to Citing Sources available at Amazon.com by clicking the link.

Hi distant relative!
My name is Sarah Perkins, daughter of Robert Perkins, who is son of Carl and Florence Perkins, Carl is the son of William H Perkins (a carpenter) who is son of William H Perkins (a dory maker) who is son of Jedediah who is son of moses all the way back to Pierre De Morlaix as well. My side of the family grew up in York, Cape Neddick,Wells and Ogunquit. Direct descendents of John and Judith Perkins as well. My question is if you know of any pictures of John and Judiths Graves and their descendents previous to Maine? Also of homes, relics, portraits etc? Would love to talk sometime. I could show you Ogunquit! My e-mail is alternativediva30@hotmail.com

I am descended from Sarah Buswell and William Foss. Sarah's mother is Susannah Perkins (born about 1652), whose father is Isaac Perkins (born 26 Jan. 1610-13 Nov. 1685) who is from Hillmorton, England as is his father, also named Isaac (20 Dec.1571- 1 Dec.1629), although at that point in the tree things get a little hazey. Isaac Sr.'s wife is so far in my search, unknown. Sarah and William Foss (both born & died in NH) had a daughter, Sarah Foss (22 Nov. 1676 NH-? Camden, ME) who married James Richards (Sr.) who begin the Richards part of my family that lead to my great grandmother and her siblings. Are they maybe related to these other Perkins' also of the same part of England?

Hello, distant relative! I am also a decendant of Mary's. Were you aware that she was convicted as a witch in 1690, yet not killed. She evidently was broken out of jail and taken to Maine until the furor was over. Here is the article if you are interested:
https://en.wikipedia.org/wiki/Mary_Bradbury
I have other documentation, just on ancestry, but would be happy to share the tree if you are interested.
She if one of the relatives I am most proud of. Best, Kristen

Hi! I am descended from his son Thomas. My great-grandmother's maiden name was Perkins (Emely Perkins Briles). Her father, Ezra Perkins was a Pony Express rider! Love learning about my genealogy, thank you, distant cousin for this! - Carol Hagon

My grandfather was Dargan grandson of Jacob Perkins son of John who moved to North Carolina 1700. Years of looking over reports of family records. I am the last of the last Perkins that moved to NC. from Mass. Over the years I have found out who we are! We should be proud to know we help to build this nation. From 1630 to 2019.
Thanks, Philip Perkins son of Alton Perkins Grandson of Dargan Great grandson of Jacob and John Perkins and so-own. Philip Perkins
Rockingham,NC.