My last Sewall ancestor to be covered in this series is Henry Sewall Jr. of Newbury, MA. I have already written about his daughter Ann and his father, Henry Sr., and his ancestors in England. Henry's father was an interesting character to say the least.  Henry Jr. seems to have been more typical of the Puritan immigrants of the early 1630's. So here is what I know about Henry Sewall of Manchester, England and Newbury, Massachusetts.

english origins
Henry was born in Manchester, England, the son of Henry Sewall and Anne Hunt.  His mother, Anne, died shortly after he was born, probably from complications from childbirth. He was baptized at the church of St. Mary, St. Denys and St. George on 25 June 1615, his mother was buried there on 1 July 1615. Henry's father remarried by the end of the year. His second wife, Ellen Mosley Nugent, a childless widow, would give birth to seven children, none of whom survived childhood.  This made Henry Jr. the only child of a very wealthy man who came from a powerful influential family. For whatever reason, father and son, pulled up stakes and moved to the fledgling colony of Massachusetts in 1634 and 1635 when Henry Jr. was about 19 years of age.

Henry Jr. sailed to New England a year before his father and step mother, but he didn't go alone. His father also sent servants and cattle to help establish a farm.  Henry landed and wintered in Ipswich.  In early 1635 he moved up to the newly formed plantation of Newbury. Newbury was 42 miles to the north of Boston.  Its land stretched from Plum Island on the coast inland between the Merrimac and Parker Rivers.  The Parker River was named for the Reverend Thomas Parker who had led his congregation from England to settle in Massachusetts.

Newbury had abundant salt marshes and therefore salt hay, which attracted Henry and others who wanted to raise cattle. Henry Sr. had previously sent cattle to Massachusetts to be cared for by John Perkins of Ipswich. The settlement of Newbury was originally on the south side of the Parker River, it would eventually be moved across the river. House lots were divided up and depending on how much money they had, land was crops and cattle was also given out. Until 1640 everyone was ordered to live within 1/2 a mile of the meetinghouse, probably on Lower Green. And as a good Puritan son, Henry Jr. would have lived with his father until he married.

marriage
Henry Jr.'s first big step toward adulthood occurred on 17 May 1637, he became a freeman of the colony, which also meant that he was a member of the church. Correct if I'm wrong but I don't think his father was a freeman or church member.  It is said that he and others from Newbury traveled the 40 miles to Cambridge, site of the Court of Election in 1637, in order to help support the election of John Winthrop who was running against Sir Henry Vane for the Governorship.

The next step to adulthood was marriage. On March 24 1646, Henry married Jane Dummer, daughter of Stephen and Alice Archer Dummer. The wedding was officiated by Sir Richard Saltonstall. Henry Sewall Sr., whatever his faults, was a generous father. On 5 August 1646 Henry gave his son and new daughter in law a farm of 500 acres at 'Newberry Falls River'. (Many website say that Henry received 500 acres in Coventry, I believe that that is not correct, Henry would get houses and land in England but the 500 acres were in Massachusetts.) Later that same year, Henry Sr. reached an agreement with Jane's father to give Henry Jr. holdings in England. Henry Sr. gave his son, to the best that I can make out, all his land and holdings in Coventry and elsewhere in England.  Henry Jr. would get 2/3 of the income and Henry Sr. would get 1/3 for the remainder of his life. Henry Jr. and his new bride were off to a great start!

back to england
So the story goes, Mr. and Mrs. Dummer didn't like the climate in Massachusetts and decided to return to England. The winter in Massachusetts was and is rather more harsh that that in England and the summers can be hotter. But, maybe they just didn't like the lifestyle.  The houses were rough with no amenities. The streets were dirt paths, the work was hard, and there were none of the luxuries of England. Maybe they were plain homesick. Maybe the fact that Henry Sr. was a wife beating, loud mouth, nutjob made it easier for his son Henry Jr. to leave his father and return to England with his new wife's parents.

the reverend sewall
After living at Tamworth, Warwickshire and Bishopstoke, Henry Sewall was given the living at St. John the Baptist in North Baddesley, Hampshire, England. North Baddesley is only about 5 miles from Bishopstoke, the childhood home of Henry's wife Jane Dummer. I wonder if the Dummer family influenced his appointment. I have another question about this appointment, when and where did Henry train to be a minister.  Most of the New England ministers graduated from Cambridge University.  Harvard University was set up to educate Massachusetts men to become ministers. So where did our Henry train?

family
Henry and Jane had eight children. The first five were born in Warwickshire and Hampshire in England and the last three were born in Newbury, after the family returned to New England. Remarkably, all of their children lived to adulthood, married and had children.

return to new england
In 1656 Henry's father died in Rowley, MA. Henry Jr. had returned to Massachusetts in 1650 to visit his father, and while there he  bought a house and 40 acres and some 20 acres of salt marsh. In 1658 he sailed for Massachusetts in order to settle his and his father's affairs. He was given a letter from Richard Cromwell, who had assumed the position of Lord Protector of England after the death of his father Oliver. It is believed that Henry intended to return to England but the end of the Puritan Regime and the return of the monarchy seems to have influenced his decision to stay in Massachusetts.

In 1661 Jane and the children returned to New England aboard the good ship the Prudent Mary, their voyage would take 8 weeks. I wonder what Jane felt at leaving her family. She would never see her parents again. 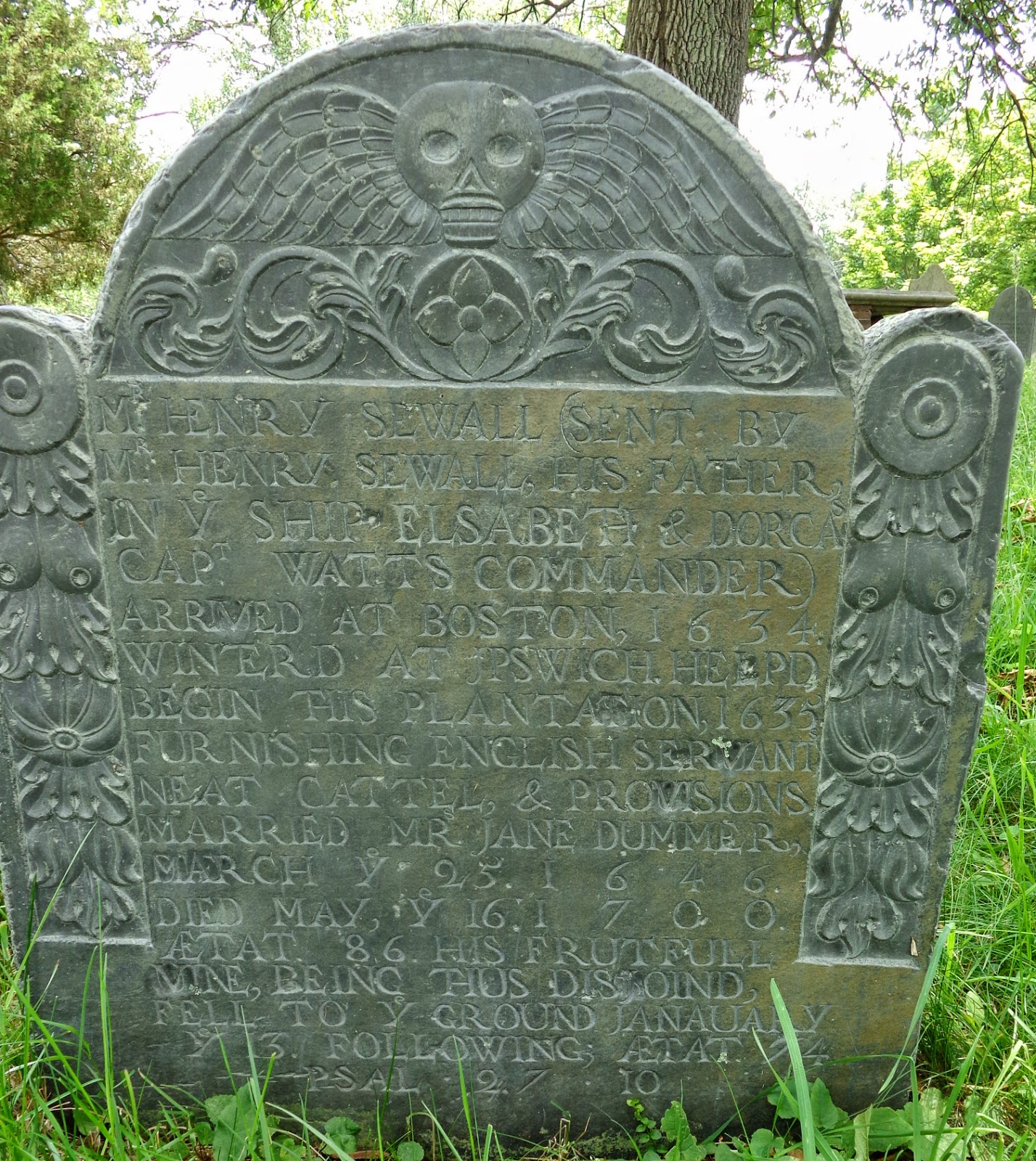 newbury redeaux
So, the Sewall family commit themselves to New England. Henry has a lot of acerage and several houses. He is called Mister Sewall and he takes up his place in colonial society as is expected. He represented the citizens of Newbury as a deputy to the general court. His name is not mentioned much in the county court records, unlike his father who was rarely out of them. I don't see any record of Henry having preached in New England, it seems he just went back to being a gentleman farmer.

rip
Henry lived a good long life, he died on 16 May 1700.  Jane died the next year in January of 1701. Although, their children all lived to adulthood, they did have the misfortune to have to bury two of them, John and Hannah both died in 1699.


Sources:
A Volume Relating to the Early History of Boston Containing the Apspinall Notarial Records from 1644 to 1651, Registry Department, Boston, MA, 1903