Edward Gilman and his family were part of a large contingent of  immigrants from the market town of Hingham, Norfolk, England who over the course of several years established a daughter town of Hingham in Plymouth County, Massachusetts. The newly formed Colony of Massachusetts held great promise for men who had the drive, ambition and capital to take advantage of the lucrative opportunities awaiting them. All they had to do was survive the crossing and then stay healthy. Edward and his family thrived in their new home. He didn't stay long in Hingham, eventually making his home in Exeter in New Hampshire. Here is what I know about Edward Gilman.

english origins
The ancestry of the Gilman family was first put into print in 1895. The researcher, himself a Gilman, did  great job, but he did make some errors, which are still perpetuated today. One of the best resources I found was a book called "The Ancestry of Abel Lunt, 1769-1806, of Newbury, Massachusetts," printed in 1968. The very best sources are, as any good genealogist knows, not a book or a website, but the primary information. These types of sources are not always easy or cheap to find. I always try to locate the original source if possible but I did not have much luck in this case. 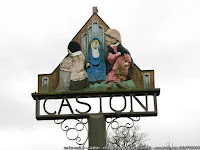 The first definite ancestor was also an Edward. He lived in Caston, a small town near Hingham. He was probably born around 1525. His King, Henry the Eighth, was still married to his first wife, Katherine of Aragon. England was still a catholic nation. On 21 June 1550 Edward married Rose Ryse in the parish church of Holy Cross. Their first child, Margaret, was baptized on 1 December 1550.  Hum, there's only six months between the marriage and the baptism, just saying. More children arrived about every two years or so. The last of ten children, to arrive was Olive. She was baptized on 21 November 1573. Olive would never know her father.

On 5 February 1572/3 Edward felt the need to make his will. He was likely between fifty and sixty years old, was he feeling his age, did he know his time was coming to an end? He was styled 'Yeoman' in his will so he was a successful man. He made bequests to his wife and all his children. His will was proved on 7 July 1573. His son Edward, received a tenement called Halwick's with pasture and meadow.

edward  not robert
In his 1895 ancestry of the Gilman Family, Alexander William Gilman, wrote that the father of Edward Gilman, the immigrant, was Robert, son of Edward and Rose. In fact, it was his older brother Edward who was the father. According to long dead researcher Colonel Charles E. Banks, Edward gave a deposition in 1637 in England in which he stated his age, 50, and his father's name, Edward. The source for this, if you're interested is the Court of Requests, bundle 27, pt. 2, Charles I. You can find it at the National Archives in London if you have some spare time. I guess I'm going to take Col. Bank's word on this one.

I have seen on various websites a birth date of 22 June 1555 for Edward, number two. But I cannot find any source that would confirm this date. I cannot imagine where it came from. We do know he was baptized in Caston on 20 April 1557. England was in the throes of religious convulsions. King Henry had thrown off the mantle of Catholicism for a more protestant leaning church. His son, King Edward, continued to progress towards becoming a fully protestant country. But with his early death in 1553, and the crowning of his catholic sister Mary, England was once again a catholic nation. A year or so after Edward Gilman was baptized a catholic, Elizabeth was queen and England once again was a Protestant nation. This back and forth must have taken a psychological toll on the English people.

Edward married but we do not know his wife's name. They most likely married in the early 1580's. Edward also seems to have moved to Hingham, which is only about five miles from Caston. Edward may have married in Hingham and had his children baptized there. Unfortunately, the parish records for Hingham don't exist prior to 1601.

edward the immigrant
Edward was born around 1587, based on his deposition of 1637 when he said he was fifty years old. No baptismal record has been found. Edward married Mary Clark in St. Andrew's Hingham on 3 June 1614. I doubt that Mary, in her wildest dreams, could not have imagined the future that awaited her as Mrs. Edward Gilman. The first twenty four years of their marriage were predictable. Edward provided for his family, Mary had babies and ran the household.

Protestant King James I followed Queen Elizabeth and most of the country embraced the changes to the Church of England. Problems began to surface when Charles I ascended the throne. Charles was married to a Catholic French princess. Under his influence and that of his Archbishop, William Laud, the Church of England was beginning to be pressed into uniformity and in the Puritan's eyes, backsliding into Catholicism. Puritans, known as Nonconformists, and the more radical element, known as Separatist, were under threat from both royal and ecclesiastical authority. The Reverend Robert Peck, minister at St. Andrew's in Hingham was held in great esteem by his Puritan leaning flock. When he was forced out of his benefice and chose to immigrate to Massachusetts he was joined by many of his parishioners, including Edward Gilman and his family.

Reverend Peter Hobart, born and raised in Hingham had already made the courageous decision to leave England for Massachusetts. Accompanying Hobart was Nicholas Jacob and his family, his wife was Mary Gilman, sister of Edward.

children of edward and mary
Mary gave birth to eleven children. She saw seven of them into the grave. Four of her children died as newborns or infants, and one as a small child. I wonder if she felt sad leaving her poor buried babies behind in England. Mary also lost one of her adult children. Edward was lost at sea, he must have been gone for some time before they got word of his passing.

hingham and beyond
Edward got off the ship and hit the ground running. Some men just seem to thrive in their new home and he was one. On 13 March 1638/9 he took his freeman's oath, allowing him to hold public office and vote in elections. In 1641 he was part of a group who were given a large land grant in what would be the new town of Rehoboth, established in 1643. His son Edward left Hingham for Ipswich by 1646 and Edward Senior follow by 1648, buying his son Edward's property.

Edward Jr. left Ipswich for Exeter where he began work on a sawmill. His father and mother joined him there in 1652. In May of that year Mr. Edward Gilman was accepted as an inhabitant and given permission to set up sawmill on the Lamprey River. John Folsom, Edward's son in law, also left Exeter and joined in the family business. Sadly Edward Jr. was lost at sea on a voyage to England in 1653.

rip
When Edward Gilman died, aged about sixty eight, he left an estate valued at 211 pounds in real estate. Much of this land had been given to his sons for their use. John Leavitt had the land in Hingham. Sons Samuel and Moses also held land from Edward. Edward made his final bequests in the form of a deed, which was written on 14 January 1654/5. This deed was presented his deed will to the Quarterly Court held in Salisbury in May of 1655.

Mary left Exeter after her husbands death and returned to live in Hingham with her daughter Lydia Cushing. Mary died on 22 June1681.

a word about mary
In his many articles on the Gilman family, Clarence Torrey also wrote about Mary's family, the Clark Family. He believed that her parents were John and Elizabeth Clark of Hingham. If so she had three sisters. Rebecca Clark was the first wife of  Joseph Peck, brother of Rev. Robert Peck, she died in England in 1637, he remarried and immigrated with his second wife. There were two other sisters; Margaret who married Anthony Cooper and Jane who married Robert Kirby. The Cooper immigrated to Hingham, New England in 1635 and Jane Kirby stayed in England. If true, Mary Gilman had a sister waiting for her in her new home, this must have been of some comfort to her.


the lincoln connection
Edward Gilman's sister Bridget married Edward Lincoln in Hingham, England in 1603. Their son Samuel Lincoln is the ancestor of President Abraham Lincoln. There is a memorial to President Lincoln in St. Andrews Church in Hingham.

Alexander William Gilman, Searches into the History of the Gillman or Gilman Family, Including the Various Branches in England, Ireland, America and Belgium, (London: Elliot Stock, 1895).

Photos from England are from the website Geograph and are used under the creative commons license.
- December 20, 2015