My ancestor, Governor Thomas Dudley was born just about 430 years ago. A long time. About 430 years before the birth of Thomas our common ancestor William de Bocland was born. We are divided by about the same amount of time. I wager, Thomas Dudley did not know about William de Bocland. The internet has opened a world of genealogy to people like me who would never have access to the records and research done on our distant relatives. I have always been a lover of medieval history, my house is full of history books covering this era. Medieval genealogy is a whole nother ballgame, the rules of which I am just learning.

Latin is key to understanding the old records, gratefully most of the ancient records have been transcribed into English, but not all! There are many good Latin to English translators online. Medieval terms for real estate are confusing and practically require a degree to understand. Some will say, they are not interested in the history of the time and what does if you ancestor had land for a knights fee or fee simple or copy hold? For me, understanding the customs and conventions of the day makes the life of my ancestor seem more real. It makes them pop off the page, not just lie there, nothing but names and dates. And that, at least for me, is the best part. Names and dates are great, but I find them boring. I want to know what did they do when they got out of bed in the morning. Okay, I know they pissed in a pot, but what did they do after that?

One book that I will recommend is The Time Travelers Guide to Medieval England. It gives a really good overview of what life was probably like in the middle ages. That being said, here is what I think I know about William de Bocland.

origins of william
The Berkshire manor of Buckland was recorded as long ago as the days of Edward the Confessor, the last Anglo-Saxon King of England, if you don't count the very brief reign of Harold Godwinson who lost to William the Conqueror at the battle of Hastings in 1066. The manor is listed in the Doomsday book as being held by the local Bishopric. The land was assessed at 8 hides. It had a mill and fishery and a dairy farm that produced cheese.[1] A hide is an Anglo-Saxon term that meant enough land to support a free peasant family. The actually acreage was not fixed at that time and was dependent on the quality of the soil. In later times a hide would be between 60-120 acres. 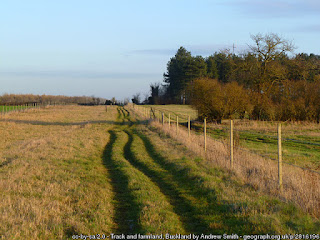 This manor would lend it's name to the man who came to own it. Hugh de Bocland. He was first recorded by the ancient historian Odericus Vitalis, a Benedictine monk who lived in England. Born in 1075, Odericus, wrote with first hand knowledge about the events of the time. Hugh, he said, was one of a number of men, all presumably Normans, who King Henry I of England "raised from the dust." They were men of low birth who because of their service to the King, were raised by him into the ranks of the nobility. [2]

Hugh held the land from the Monastery of Abingdon. According to the Chronicles of Abingdon, Hugh may have profited "by the unjust actions" of one Prior Modbert, who had been appointed by King Henry I to administer the Abbey whilst the role of Abbot went unfilled. Modbert was trying to curry favor with the King by handiing out abbey lands to the king's favorites. In 1100 Henry ordered Hugh de Bocland, Sheriff of Berkshire, to reseize abbey lands given to various men, including himself! Most of the men were royal officials and Modbert had given them land for as long as they were in power. Hugh had been given three hides of abbey land in Hanney. [3]

Hugh was sheriff of not only Berkshire, but also Hertfordshire, Bedfordshire, Buckinghamshire, Essex and Middlesex. Clearly he had the King's favor. In 1120 the Sheriff of Berkshire was a William Bocland, believed to be his son. The fact that his son had taken his father's role, has lead scholars to suggest that Hugh was dead by that time. [4]

maud
The next Hugh de Bocland died about 1175. His exact relationship to the first Hugh is unknown, but it is possible that they were directly related. I can't find too much of interest on Hugh. His wife though, is a topic on interest. Hugh married a woman named Maud. She was the widow of Peter de Ludgershall.[5] He too, took his name from a place. Ludgershall is a small village on the edge of the Salisbury Plain. Peter was a forester, and was sometimes called Piers the forester. His ancestry is unknown. I have seen that his father was a John de Ludgershall but cannot find source to back it up. I have also seen that Peter's surname was AKA Balliol but I have no clue where that came from.

Anyway Maud and Peter had several children who took the surname FitzPeter. Maud's second son Geoffrey FitzPeter first came on the scene in 1184 when he was made Sheriff and Chief Royal Forester. [6] Geoffrey joined the royal service of King Henry II in his final decade. He was what was known as a Curialis, a household knight. By the time of King John, his holdings had expanded from those of a minor knight to one of the great men of the kingdom. One of King John's first acts was to make Geoffrey the Earl of Essex on 27 May 1199. [7] He would become King John's Justiciar, his chief administrator, quite an honor for a lowly knight.

Peter de Ludgershall death is unknown. He did not die on 14 January 1179/80 as is frequently seen on the internet, that was the date of the marriage William de Mandeville, Earl of Essex. I'm not sure how it got connected to Peter. Also, we know that Hugh, Maud's second husband died in 1175, so Peter was long dead by then. Anyway, apparently Peter became a monk prior to his death, despite being married. I guess you could do that back then. His son Geoffrey had his body moved and reburied in Winchester at St. Swithin's on 9 May 1198. Maud's date of death is also unknown. Presumably she died at her home in Buckland, but who can really say.  Medieval folk were very concerned for their eternal soul and sought to protect it with donations to churches and abbeys. Maud de Bocland made a grant dated between 1185 and 1200 to Southwick Priory in Hampshire. [8]

Maud and Hugh Bocland had had two children, William de Bocland and his sister Hawise.

maud was not a mandeville
Maud's ancestry is unknown. Now I know that it  has been written in many places both in print and on the net that she was a de Mandeville by  birth but this is not the case. I have copied and pasted an explanation for this mistaken identity below. This mistake has also been corrected in the book Domesday People which is a rigorous study of the Anglo Normans by Dr. Katherine Keats-Rohan, History Department, University of Oxford.

OK, now that it is out in the open, and it has been discussed here before, there is no sense in putting off my comments. This is the case I had in mind the other day, of a connection almost certainly wrong, probably drawn from other secondary sources assumed to be reliable, while these in turn were derived from the chart of the Earls of Essex in CP. (Complete Peerage) In this chart, Maud is placed under a horizontal line connecting Geoffrey's children, but is not connected to that line. This placement was certainly done solely for the purposes of graphical arrangement, and was never intended to display relationship. However, as far as I know, no one has ever published this "correction".


What has been published are studies of Geoffrey Fitz Piers, son of "Peter de udgershall" and "Matilda". These follow in detail the manipulations that Henry II took to ensure that the Mandeville birthright, represented by Beatrice de Say, grand-niece of Geoffrey, Earl of Essex, came to his favorite. THis man, Geoffrey Fitz Piers, was specifically said by a contemporary chronicler to be of insubstantial origins. Now if Geoffrey Fitz Piers was maternal grandson of Earl Geoffrey, and nephew of the recently deceased Earl William de Mandeville, then he would neither have been of lowly origins, nor would Henry have had to manipulate the status of the Say heiress in order to justify Geoffrey coming into the Mandeville inheritance - he would have been the legal heir. Simply put, this connection is wrong on so many levels, that it would require a higher burden of proof than for a connection that does not have so many strikes against it. (9)

william and matilda
No primary source connects William de Bocland to Hugh but it is believed that he was indeed his son. William married Matilda de Say, a daughter and heiress of William de Say of Kimbolton, Huntingdonshire and Saham, Norfolk. (10) Matilda's sister, Beatrice, was married to William's half brother Geoffrey, the Earl of Essex. The earldom came through the de Say family from their grandmother Beatix de Mandeville who was the sister of the original Earl of Essex. It's very twisty and a bit hard to follow but I will try to lay it out in my next post on the de Say and de Mandeville family.

William and Matilda had three daughters who were coheiress of their father's estate when he died in 1216 The daughter's were Matilda, Hawise and Joanna. Matilda and her sister Joanna married brothers, William and Simon d' Avranches.

joanna de bocland
Joanna was first married to Robert de Ferrers a younger son of the Earl of Derby. He must have made the marriage shortly after the death of her father William as the contract was made when King John I was still alive. Robert de Ferrers agreed to pay King John 500 pounds for the right to marry her. In 1221 the money was still to be paid, even though the amount had been reduced to 300 marks. Robert died on 4 December 1225. He and Joanna had no children.

Joanna married for her second husband Simon d' Avranches and they are the subject of a future article.