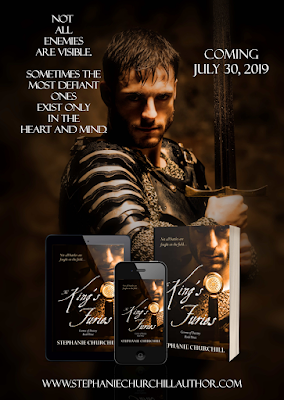 The King’s Furies by Stephanie Churchill

Reviewer’s note: I was given an ARC of the book in exchange for my honest opinion.

The King’s Furies is a historical fantasy, the setting of which resembles medieval Europe. The book is the third in a series. I have not read the first two. The book is told in both first person, Casmir-the king, and in third person by various other characters, including Queen Irisa and her sister Kassia, the main characters of the first two books.

The Plot: Without giving anything away, the book is centered on the king, Casmir, who has recently come to the throne of a kingdom once ruled by the father he hated. He is determined not to follow in his footsteps as king, husband or parent. Although the setting is medieval, it is not our medieval. The king’s ideals are much more modern and progressive. An event occurs early in the plot which sets Casmir on a path which challenges his principles, abilities and beliefs. I didn’t feel his actions were all that outrageous or merited the reactions they received.

It seemed as if the first half of the book was mostly dialogue. There was little actual action but lots of talking. Characters would go off and do things, come back and talk about them. There is also a great deal of back story, filling in details from the first two books. There are several chapters that take place in the near to distant past. I almost felt as if I read a mini version of  book one and two, contained inside the pages of the third.

Casmir spends a great deal of time in self reflection. It was fine for a while, but I found it tedious by the end of the book. One character, Helene, was introduced in chapter three. She does not appear again until chapter 34. I found this confusing, wondering who she was and why the huge gap in her appearance. I went back to chapter 3 several times to try to see if I had missed something.

It’s not until the second half of the book, when the storyline is picked up by Jack, that the action kicks up a notch. I found this odd as he was a secondary character. There is also a significant amount of backstory from previous books but at least someone is doing something other than talking. The final chapters are back to the angsty king and his personal struggles. The resolution of the plot was practically a nonevent.

The Characters: I have to admit I didn’t particularly care for Casmir. I found him somewhat whiny. He seemed out of place; out of time. The Queen, Irisa, was better, but she really did nothing in this book but talk. I wanted her to do something, anything. Her sister Kassia was an improvement, but then she too fell into the angsty female trap. Jack seems to have been the only one with any confidence or cojones.

The Writing: I thought the writing was good. I sometimes found her word order and syntax to be off-putting. For instance, “He peeked at them from hiding and found nothing amiss.” I dislike having to reread sentences to try to understand what the author means, it breaks my concentration and pulls me out of the story. I did enjoy the fact that the author used her own words, I assume invented, and her use of original names, etc. Some descriptions were overly wordy and unnecessary to the plot.

Overall: I thought it was better than good, but not a page turner. I had no trouble putting it down. I think I might have enjoyed it more if I had read at least one of the first two books and felt a stronger bond with the characters. I think the emphasis on emotions over action put me off. Blame it on Game of Thrones, I was expecting a high action period drama and got a medieval Hallmark Channel movie instead. I think the target audience for this book is women who love to talk about their feelings. Not sure if men would like it. Recommend it for women who like historical romance. I would give this book 3 1/2 stars, I don’t have that option, so I giving it 4 stars on Amazon and Goodreads.