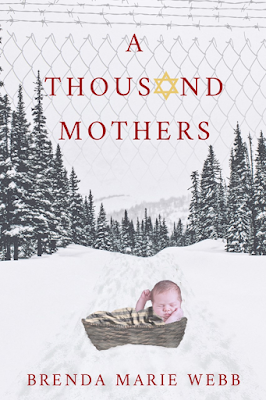 
Reviewers Note: I was given a free copy of this book in exchange for an honest review.

Plot: A Thousand Mothers is the moving story of a group of women who come together in Ravensbruck, a Nazi Concentration Camp in Germany, to save the life of a newborn child.

Characters: The first half of the book focuses on a large group of women who steal, lie, cheat death, and allow unspeakable things to happen to themselves and others, in order to preserve the life of Flora, an infant born at the camp. Against a backdrop of brutality and the constant killing of prisoners, the women sacrifice themselves for this child. For a while, I feared there might really be a thousand mothers. Because there are so many of them, I had a hard time keeping track of who was who and had to go back and reread bits to refresh my memory. It was difficult to see much difference in their personalities.

Part two of the book whizzes through Flora’s life after she is rescued from Nazi Germany and adopted into an American family. Her early life is given a brief outline before the final segment of the book which takes place when she is a grandmother. We learn what became of many of the women who protected Flora as a baby as she reconnects with her past. There is a whole new set of characters to keep up with in this part. The story is told in third person omniscient, so the voice and point of view changes rapidly as well.

The History: Webb nails the history of Ravensbruck, in all its gory details. The plight of the women, each from a different background, is terrifying. The conditions of the camp are told in graphic detail as is the despicable nature of the German prison guards, doctors and staff. I do have to say, not to diminish what anyone suffered in these camps, I thought there might have been too much focus on the atrocities which I found took away from the story.

The Writing: The writing is good, the book well edited. I don’t like third person omniscient as a point of view, but I understand why the author chose it, with so many characters, clamoring to get her attention.

Overall: It might sound as if I didn’t enjoy this book, which is not true, I did. I found the story of Flora compelling and well told. But, I was overwhelmed by the cast of characters, and sorry that I did not know them a little bit better.

Recommendation: I would recommend this story to anyone who enjoys historical fiction, stories of determined women, readers interested in holocaust stories and Jewish history. There is a lot of death and dying in this book, as one should expect in a book set in a death camp, so reader beware.