This blog post comes  hard on the heels of one written about George Abbott who also hailed from Bishop's Stortford, in fact it is believed that he traveled with the Chandler and Dane families to Roxbury in 1637.  The English ancestry of both the Abbott and Chandler families has been well researched. The story of William in America is a short one, Annis however, lived a long life, outliving three husbands.  As is typical of women of her time, her story  can only be told through the records of her husbands and her children. 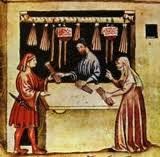 Like the family of George Abbott, William Chandler's ancestry can be traced back to his gg grandfather Thomas Chandler. The family was well established in the Bishop's Stortford area where they were flourished. They were never rich but they seemed to be successful. Thomas Chandler, gg grandfather of William was first documented in Bishop's Storford in 1514 when the burial of his wife was recorded in the parish records.  His surname was spelled Chaundeler and it seems that he may have been in fact a "chandler" by occupation; a candle maker.

William the immigrant's father was Henry Chandler who was born around 1560, married wife Anne Unknown by 1590 and wrote his will and died in 1618.  He was a Glover by trade, but by then the surname no longer represented the occupation of the individual. William was a "pointer" he made the tips of laces for clothing, shoes and boots. Hard to believe you could have made a living at that but there you are. 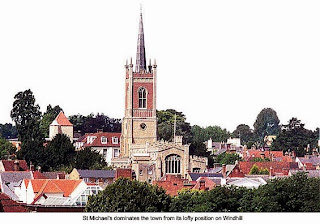 William married twice in England.  His first wife was Alice Thorogood of nearby Farnham, they married 29 January 1621/2. They had two children, both girls, who died early.  Alice died in June of 1625.  William wasted no time and was remarried on 6 November 1625 to Annis Bayford, also of Farnham.  Annis, whose name is also given as Anne and Agnes was the daughter of Francis and Johan Bayford. She was baptized in Farnham on 12 June 1603.

In 1637 he and his wife and four small children, along with quite a few of their neighbors, left their homes in England behind forever for a new life in New England. Although his wife and children would prosper in their new home, William was dead within four years of his arrival.

rocksberry
William and his family as well as other families from the Bishop's Stortford area made Roxbury their initial home. He was given a house lot and some land, totaling 22 acres for farming. His oldest son Thomas was still a boy of nine years of age so would not yet be strong enough to help with the laborious task of clearing and plowing virgin land.  George Abbott, a young man also from Bishop's Stortford who would one day marry the then seven year old Hannah Chandler, was believed to  have traveled with and been living with the Chandler family.  If so, he would have been a strong pair of hands to help the 42 year old William. 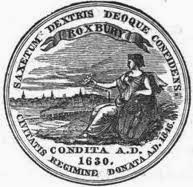 William took the freedman's oath on 13 May 1640. In order to do so, William had to be a full member of the church at Roxbury. Being a freedman would enable a man to participate fully in the running of the new colony but by 1640 William was dying.  He suffered from a lingering illness which lasted the better part of a year, as recorded by the Reverend John Eliot, minister of Roxbury. He wrote that William "fell into a consumption to which he had been long inclined, he lay near a year sick".  He described William as poor but God opened the hearts of his nabs (neighbors?) to him, yet he never wanted". His death was recorded on the 26th of the 11th month of the year 1641. This is often interpreted as 26 November 1641, but if Rev. Eliot was referring to the 11th month of the Puritan calendar than the date is actually 26 Jan 1641/2.  The Puritan calendar year began on March 25th not January 1.

second marriage for annis
On 2 July 1643 Annis married widower John Dane.  He too hailed from Bishop's Stortford. John assumed responsibility for raising and maintaining her children for which he was awarded the house and land originally granted to William Chandler. Annis' son William married John Dane's daughter Mary and her daughter Hannah married his son Francis, quite a combining of the two families.
John Dane was born about 1587 in Little Berkhampstead, he had married and had children in England which he brought with him to New England.  His wife died the same year as William Chandler. John and Annis were married for 15 years before he died in Roxbury in 1658. He divided his estate amongst his children and his "loving wiff".

third husband
Annis married for a third and last time on 9 August 1660 to John Parmenter, widower, deacon of the church, and resident of Sudbury.  His wife had died the previous April.  He died, aged 83, in 1671  in Roxbury.  Annis lived another 12 years, dying in March of 1683. She was recorded as "old mother Parmiter, a blessed saint".

final note
Someone on ancestry.com has William Chandler as Sir William Le Chaundler and his wife Annis is called Lady Annis.  In this same tree George Abbott who married their daughter Hannah is called Sir George Abbott and they include a portrait of him.  While this is good for a giggle, it is pure fabrication.  The portrait is actually of George Abbott who was at one time the Archbishop of Canterbury, he died in 1633.

Chandler, George, The Chandler Family: The Descendants of William and Agnes Chandler who settled in Roxbury 1637, 1883, Massachusetts