Robert Hibbart and his wife Joan (Luff) of Salem, MA

Well after a brief look at the genealogical evidence for Robert Hibbart and his wife, said to be Joan Cluff, I can see I have a lot of work to do to get this one correct. One of the first things I noticed is the many spellings of the name Hibbard: Hebert, Hibbert, Hibberd, Hibird, Hibbard, Hibbart are just some of the variations of the name. In the signature above, Robert himself spells is surname Hubard. For this blog I am going to spell it Hibbart when I write about him.  If I am writing from another source I will spell it the way they did.
I know that there are multiple Hibbart family websites and a Hibbard book but they just might have some of their info wrong. The identity of Robert's wife Joan is also under scrutiny. So, who were Robert and Joan Hibbart, let's get started.

english origins
In Sidney's History of Salem, MA he writes a Robert Heberd lived in the salt works built and owned by John Winthrop Jr., son of Governor Winthrop, in about 1638 or 1639. Sidney says Robert Heberd was about 23 years old and was born about 1615. Other than the estimated year of birth and the fact that Robert was almost certainly born in England he offers no information concerning the birthplace of Robert.
So a search of ancestry.com and other websites shows that most  believe that Robert was born in Salisbury, England, and baptized on 13 March 1613. This information comes from the book, Genealogy of the Hibbard Family who are Descendants of Robert Hibbard of Salem, MA by Augustine George Hibbard. The author states that Robert the immigrant was baptized on that date in Salisbury, but offers no reason why he believes it to be so. Well there was a Robert, son of John, who was baptized on that date, but how do we know that he was the same Robert who immigrated to the Massachusetts Bay Colony?

salem, ma
There are no records which would prove the year of immigration for Robert, but he was definitely in Salem by 1639. A Robert Hebert is recorded as being in Salem in 1639 in the employment of John Winthrop Jr. in the business of making salt, a very important industry in the early days of the colony for preservation of fish that were caught and sent back to England.  He is also described as a bricklayer.

Robert and his wife Joan were admitted as full members of the church in Salem on May 3, 1646. They had their children baptized after their admittance.  Their oldest surviving child was Marie who was born on November 27, 1641. Robert and Joan must have been married by the end of 1640 or beginning of 1641 if Marie was their first child, their marriage is not recorded in Salem and it is entirely possible that they were married in England prior to their departure.
Because Robert was a full church member he was able to take the freeman's oath, which he did 6 July 1647. In 1659 he bought 13 acres of land from a William Hascall, he is called Robert Hibbard, bricklayer in the deed. 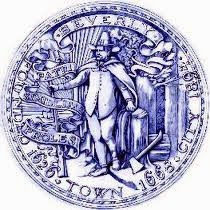 On 12 August 1650 the selectmen of Salem granted Robert Hiberd 20 acres of ground to be used for commonage and wood, this land was on across the river from Salem proper. In March of 1665/6 he was granted more land on the Cape Ann side and across the Bass River from the Salem.  This area was set apart from Salem and became known as Beverly.  I have read that Robert moved to Beverly but I think that the land he lived on became Beverly when it was incorporated as a separate town. 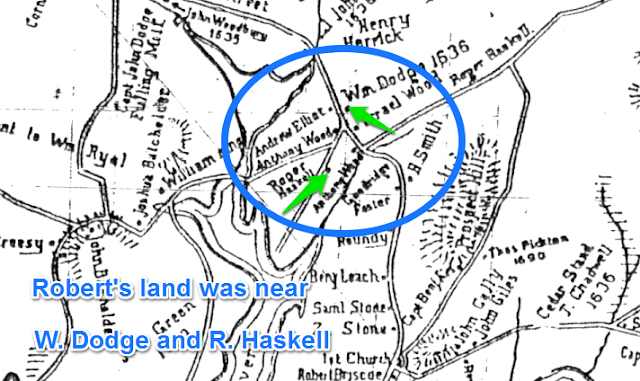 who was joan
Joan is said by many on the net and ancestry.com to be the daughter of John Luff and his wife Bridget of Salem.  In the records of the Court and of the town of Salem, John Luff is called "father" by Robert Hibbart. This inferred relationship has been interpreted as meaning that John Luff was Joan's father and Robert's father in law. However, Robert Charles Anderson of the Great Migration Series disputes this relationship in his bio on John Luff.
John Luff sailed from England on the Mary and John in March of 1633/4, no other family members were listed.  John received land in the 1636 division of land in Salem, the amount of acreage was not listed.  Significantly, in the records of the 1637 division, each recipient's name was recorded along with the size of their household. The acreage of each man's allotment was dependent on the size of his household. In 1637 John Luff had a household of one, no wife and no children. Anderson surmises that John Luff married Bridget Unknown between 1637 and 1647, after the land grant of 1637 was made.  He believes that Bridget was either the mother of Robert Hibbart or of his wife Joan, making John Luff the step-father of one of the two. I tend to agree with Anderson so my Joan will be Joan Unknown.

Joan was presented at least twice in the Quarterly Court held at Salem.  In November of 1659 she was appeared and was accused of railing and speaking several lies upon Zackary Herek.  It was said by witnesses that she claimed that she saw Zackary leaving the house of John Ston.  She, it was claimed, said he was drunk.  She denied ever saying such thing and swore as God is her witness that she did not.  The court apparently did not believe her and offered her a choice of being fined or acknowledge her lies, she chose the fine.
Jane was again in court for saying that Liddea and Mary Grover (who I think was married to Zachary Herick) were "the veriest lyers att Bass River and they were able to ly the devill out of hell".  She confessed that she said it and that it was the truth, she paid a fine.

John, b. Feb. 24, 1642/3 Salem,   m. (1) Abigail Graves (2) Ruth Walden
Sarah, b. October 26, 1644, d. January 8, 1644/45Sarah bp. 17 May 1646
Joseph, bp. May 7, 1648, m. Elizabeth Graves, their daughter Dorcas married Nathaniel Abbott of Andover their daughter Mary Abbott m. Benjamin Blanchard. Chloe Blanchard their descendant married Samuel Thornton.
Robert, bp. May 7, 1648; m. Mary Walden
Joanna, bp. 9 March 1651, m. John Swanton
Elizabeth, bp. 1 June 1653
Abigail, bp. 6 June 1655,  m. Thomas Blashford
Samuel, bp. 20 June 1658, m. Mary Bond
(the dates for the first three children were recorded as their birth date as reported by their father Robert in Court, the dates for the remaining children are their baptismal date not their birth date, these baptismal dates were recorded in the Salem records. The dates were recorded using the old Puritan calendar in which the first month of the year was March and not January.  So Marie who was born on 27-9-1641 was born in November and not September.)

rip
Robert died in Beverly on 7 May 1684.  Although he had signed his name on documents when he was younger he was unable to sign his will which was written on 9 April, barely more than a month before he died. Joan lived another 12 years, dying in Beverly in 1696. Robert died before the Salem Witch trials but Joan and their children would have had front row seats as the drama unfolded.  I do not think that they were involved in any of the trials but surely they would have known accusers and victims of the trials. Bridget Luff lived with Robert and Joan until she died sometime after June of 1671, when she was in court testifying.

Hibbard, Augustine George, The Genealogy of the Hibbard Family who are Descendants of Robert Hibbard of Salem, MA, CN, 1901

Records and Files of the Quarterly Court of Essex