In Search of Sally "The Preacher" Thornton

In his book on the descendants of James Thornton, Charles Thornton Adams mentions but briefly Sally the daughter of Samuel and Katherine Baker Thornton.  He called her Sally "the preacher" Thornton. He said she built a church in Thornton,NH and was a gifted speaker. I've always wondered who should a woman be preaching in that era? I decided to try to find Sally "the preacher" in the records. Here is what I've found.

1809 Sally's parents were living in Hatley Quebec during the first 20 or so years of their marriage. Their second child, David, was born in Hatley in 1808.  Their last child, John, was also born in Hatley, in 1818. It seems safe to say that their daughter Sally, born in 1809, would have also been born in Hatley. There is no record of her birth, or that of her siblings for that matter. 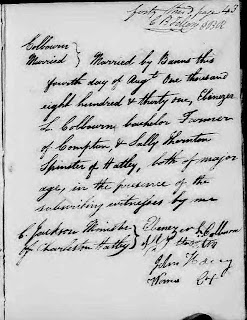 1831 Sally's oldest sister, Hannah, married Shepard Morse in Hatley in 1822. In 1831 a Miss Sally Thornton married Ebenezer L. Colborn in Hatley, Quebec. Sally is a nickname for Sarah. Is this Sarah Thornton our Sally Thornton?

1840 An Ebenezer Colburn was living with his family in Campton, NH

1857 On 31 Dec of 1857 Mary Jane Colborn married Hiram J. Ray in Manchester, NH. No parents were recorded. The couple lived in Concord, NH.

1870 In this census Hiram J. Ray and his wife Mary Jane and their daughter Gertie Bell live in Concord, NH. With them lives her mother Sarah Colburne, widow, born about 1810 in Canada.

1880 Living in Concord are the Hiram, Mary Jane, Gertie Bell, Nettie J. Ray and Sarah Colburn, age 71. Sarah was born in 1809 in NH, according to the census.

1882 Okay, stay with me through this one. In March of 1882 a Sarah Colburn of Concord, NH married a man named John H. Ring of Northwood, NH. So, if this our Sarah Colburn she would be 73 years old and getting married for the second time. It does not seem like this would be our gal. But.....

1893 On the 15th of April 1893 died one Sarah C. Ring of Laconia, NH. She was born in 1809 in Hatley, Quebec. She was buried in Campton, NH.  Her mother was Catherine Baker, born in Campton.  The only stumbling block here is the father, he is listed as John Thornton, born in Campton, NH. If this was our Sally Thornton, her mother was Catherine Baker from Campton, but remember her father's name was Samuel. I think this is her. I think whoever gave her information at her death got the father's name wrong. What do you think? Is this Sally the Preacher?


What do you think?